Saliva
This article is about the substance produced in the mouths of humans. For genus of a plant Salvia, see Salvia. For other uses, see Saliva (disambiguation). 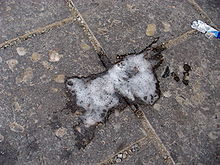 Human saliva on a public walkway.

Saliva (English pronunciation: /səˈlaɪvə/, referred to in various contexts as spit, spittle, drivel, drool, or slobber) is the watery substance produced in the mouths of humans and most other animals. Saliva is a component of oral fluid. In mammals, saliva is produced in and secreted from the three pairs of major salivary glands, and hundreds of minor salivary glands. Human saliva is composed of 98% water, while the other 2% consists of other compounds such as electrolytes, mucus, blood antibacterial compounds, and various enzymes.[1] As part of the initial process of food digestion, the enzymes in the saliva break down some of the starch and fat in the food at the molecular level. Saliva also breaks down food caught in the teeth, protecting them from bacteria that cause decay. Furthermore, saliva lubricates and protects the teeth, the tongue, and the tender tissues inside the mouth. Saliva also plays an important role in tasting food, by trapping thiols produced from odorless food compounds by anaerobic bacteria living in the mouth.[2]

Various species have evolved special uses for saliva that go beyond predigestion. Some swifts use their gummy saliva to build nests. Aerodramus nests are prized for use in bird's nest soup.[3] Cobras, vipers, and certain other members of the venom clade hunt with venomous saliva injected by fangs. Some arthropods, such as spiders and caterpillars, create thread from salivary glands.

The digestive functions of saliva include moistening food and helping to create a food bolus, so it can be swallowed easily. Saliva contains the enzyme amylase (also called ptyalin) that breaks up starch into sugar. This is why the white, popped part of a kernel of popcorn (which consists of starch) seems to melt on the tongue and taste sweet. Thus, digestion of food begins in the mouth. Salivary glands also secrete salivary lipase (a more potent form of lipase) to start fat digestion. Salivary lipase plays a large role in fat digestion in new-borns as their pancreatic lipase still has some time to develop.[4] It also has a protective function, helping to prevent bacterial build-up on the teeth and washing away adhered food particles.

A common belief is that saliva contained in the mouth has natural disinfectants, which leads people to believe it is beneficial to "lick their wounds". Researchers at the University of Florida at Gainesville have discovered a protein called nerve growth factor (NGF) in the saliva of mice. Wounds doused with NGF healed twice as fast as untreated and unlicked wounds; therefore, saliva can help to heal wounds in some species. NGF has not been found in human saliva; however, researchers find human saliva contains such antibacterial agents as secretory IgA, lactoferrin, lysozyme and peroxidase.[5] It has not been shown that human licking of wounds disinfects them, but licking is likely to help clean the wound by removing larger contaminants such as dirt and may help to directly remove infective bodies by brushing them away. Therefore, licking would be a way of wiping off pathogens, useful if clean water is not available to the animal or person.

The mouth of animals is the habitat of many bacteria, some pathogenic. Some diseases, such as herpes, can be transmitted through the mouth. Animal (including human) bites are routinely treated with systemic antibiotics because of the risk of septicemia.

Recent research suggests that the saliva of birds is a better indicator of avian influenza than are faecal samples.[6]

Saliva secretes Gustin hormone which is thought to play a role in the development of taste buds.

The trophic, antioxidant and apoptosis-inductor actions and the presumed anti-tumour activity of iodide might also be important for prevention of oral and salivary glands diseases.

The production of saliva is stimulated both by the sympathetic nervous system and the parasympathetic.[7]

Parasympathetic stimulation leads to acetylcholine (ACh) release onto the salivary acinar cells. ACh binds to muscarinic receptors and causes an increased intracellular calcium ion concentration (through the IP3/DAG second messenger system). Increased calcium causes vesicles within the cells to fuse with the apical cell membrane leading to secretion formation. ACh also causes the salivary gland to release kallikrein, an enzyme that converts kininogen to lysyl-bradykinin. Lysyl-bradykinin acts upons blood vessels and capillaries of the salivary gland to generate vasodilation and increased capillary permeability respectively. The resulting increased blood flow to the acinar allows production of more saliva. Lastly, both parasympathetic and sympathetic nervous stimulation can lead to myoepitheilium contraction which causes the expulsion of secretions from the secretory acinus into the ducts and eventually to the oral cavity.

There is much debate about the amount of saliva that is produced in a healthy person per day; estimates range from 0.75 to 1.5 liters per day while it is generally accepted that during sleep the amount drops to almost zero. In humans, the submandibular gland contributes around 70–75% of secretion, while the parotid gland secretes about 20–25 % and small amounts are secreted from the other salivary glands.

Produced in salivary glands, human saliva is 98% water, but it contains many important substances, including electrolytes, mucus, antibacterial compounds and various enzymes.[1]

It is a fluid containing:

Spitting or expectoration is the act of forcibly ejecting saliva or other substances from the mouth. It is currently considered rude and a social taboo in many parts of the world including the West, while in some other parts of the world it is considered more acceptable. It is possible to transmit infectious diseases in this way.

It has also been suggested that there are many instances where human saliva production cannot be explained rationally, for instance, men spitting into urinals or toilets before urinating.[9]