Proline (abbreviated as Pro or P) is an α-amino acid, one of the twenty DNA-encoded amino acids. Its codons are CCU, CCC, CCA, and CCG. It is not an essential amino acid, which means that the human body can synthesize it. It is unique among the 20 protein-forming amino acids in that the α-amino group is secondary. The more common L form has S stereochemistry.

Proline is biosynthetically derived from the amino acid L-glutamate and its immediate precursor is the imino acid (S)-1-pyrroline-5-carboxylate (P5C). Enzymes involved in a typical biosynthesis include:[2]

Zwitterionic structure of both proline enantiomers: (S)-proline (left) and (R)-proline

The distinctive cyclic structure of proline's side chain locks its φ backbone dihedral angle at approximately −75°, giving proline an exceptional conformational rigidity compared to other amino acids. Hence, proline loses less conformational entropy upon folding, which may account for its higher prevalence in the proteins of thermophilic organisms. Proline acts as a structural disruptor in the middle of regular secondary structure elements such as alpha helices and beta sheets; however, proline is commonly found as the first residue of an alpha helix and also in the edge strands of beta sheets. Proline is also commonly found in turns, which may account for the curious fact that proline is usually solvent-exposed, despite having a completely aliphatic side chain. Because proline lacks a hydrogen on the amide group, it cannot act as a hydrogen bond donor, only as a hydrogen bond acceptor. The distinct side chain/amine group interactions allow proline to aid in the formation of beta turns and also explains why it is not apparent in alpha helices... 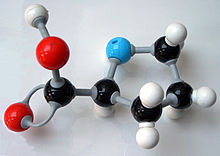 A plastic ball-and-stick model of a proline molecule

Multiple prolines and/or hydroxyprolines in a row can create a polyproline helix, the predominant secondary structure in collagen. The hydroxylation of proline by prolyl hydroxylase (or other additions of electron-withdrawing substituents such as fluorine) increases the conformational stability of collagen significantly.[3] Hence, the hydroxylation of proline is a critical biochemical process for maintaining the connective tissue of higher organisms. Severe diseases such as scurvy can result from defects in this hydroxylation, e.g., mutations in the enzyme prolyl hydroxylase or lack of the necessary ascorbate (vitamin C) cofactor.

In 2006, scientists at ASU discovered that solutions of TiO2 illuminated with ultraviolet radiation can serve as an extremely cost-effective and accurate protein cleavage catalyst. The TiO2 catalyst preferentially and rapidly cleaves protein at sites where proline is present, while taking much longer to degrade the protein from its endpoints.[4]

Peptide bond formation with incoming Pro-tRNAPro is considerably slower than with any other tRNAs, which is a general feature of N-alkylamino acids.[5]

Peptide bonds to proline, and to other N-substituted amino acids (such as sarcosine), are able to populate both the cis and trans isomers. Most peptide bonds overwhelmingly adopt the trans isomer (typically 99.9% under unstrained conditions), chiefly because the amide hydrogen (trans isomer) offers less steric repulsion to the preceding Cα atom than does the following Cα atom (cis isomer). By contrast, the cis and trans isomers of the X-Pro peptide bond (where X represents any amino acid) both experience steric clashes with the neighboring substitution and are nearly equal energetically. Hence, the fraction of X-Pro peptide bonds in the cis isomer under unstrained conditions ranges from 10-40%; the fraction depends slightly on the preceding amino acid, with aromatic residues favoring the cis isomer slightly.

From a kinetic standpoint, cis-trans proline isomerization is a very slow process that can impede the progress of protein folding by trapping one or more proline residues crucial for folding in the non-native isomer, especially when the native protein requires the cis isomer. This is because proline residues are exclusively synthesized in the ribosome as the trans isomer form. All organisms possess prolyl isomerase enzymes to catalyze this isomerization, and some bacteria have specialized prolyl isomerases associated with the ribosome. However, not all prolines are essential for folding, and protein folding may proceed at a normal rate despite having non-native conformers of many X-Pro peptide bonds.

Proline and its derivatives are often used as asymmetric catalysts in organic reactions. The CBS reduction and proline catalysed aldol condensation are prominent examples.

L-Proline is an osmoprotectant and therefore is used in many pharmaceutical, biotechnological applications.

In brewing, proteins rich in proline combine with polyphenols to produce haze (turbidity).[6]

Proline is one of the two amino acids that do not follow along with the typical Ramachandran plot, along with glycine. Due to the ring formation connected to the Beta-carbon, the ψ and φ angles about the peptide bond have less allowable degrees of rotation. As a result it is often found in "turns" of proteins as its free entropy (ΔS) is not as comparatively large to other amino acids and thus in a folded form vs. unfolded form, the change in entropy is less. Furthermore, proline is rarely found in α and β structures as it would reduce the stability of such structures, because its side chain α-N can only form one hydrogen bond.

Additionally, proline is the only amino acid that does not form a blue/purple colour when developed by spraying with ninhydrin for uses in chromatography. Proline, instead, produces an orange/yellow colour.

Richard Willstätter synthesized proline by the reaction of sodium salt of diethyl malonate with 1,3-Dibromopropane in 1900. In 1901, Hermann Emil Fischer isolated proline from casein and the decomposition products of γ-phthalimido-propylmalonic ester.[7]

The depicted scheme is for racemic proline and was taken from Vogel Practical Organic Chemistry 5th edition. 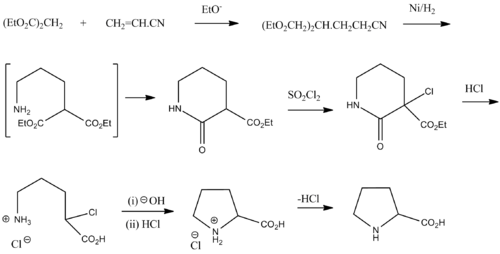