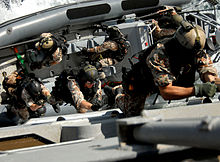 A visit, board, search and seizure team, mainly composed of personnel from the Frogman Corps, entering USS Vella Gulf

The Danish Frogman Corps (Danish: Frømandskorpset) is an elite special forces frogman corps in the Royal Danish Navy. This corps was set up on June 17, 1957 based on the model of the British SBS. Initially it was under the Danish Navy's Diving School at Flådestation Holmen (Naval Station Holmen, Copenhagen), but in 1970 it was made an independent unit, operationally under the submarine squadron.

Today the Danish Frogman Corps is directly under the Danish Navy's Operational Command. They are an elite team of professional divers and soldiers.

The Frogman Corps' primary duty is reconnaissance, but it is also tasked with assaulting enemy ships, sabotage of fixed installations, and combat duties.

It performs special forces type work on land also, including anti-terrorism and anti-criminal work. The Corps supports the police with clearing up criminal matters that demand highly specialised diving. Also, local authorities, etc can benefit from the frogmen's skills, for example when underwater installations must be inspected.

The Danish Frogman Corps trains at the Torpedo Station at Kongsøre and works through a long series of courses, e.g.:

The basic Frogman Course is nine months. Each year 500-600 applicants start the course and less than a dozen complete all nine months.

Crown Prince Frederik of Denmark completed his education in this corps, under the nom de guerre "Pingo".