The New Orleans Baptist Theological Seminary ("NOBTS") is a private, non-profit institution of higher learning affiliated with the Southern Baptist Convention, located in the city of New Orleans, Louisiana. It was the first institution created as a direct act of the Southern Baptist Convention. Missions and evangelism are core focuses of the seminary. Leavell college is the undergraduate program of NOBTS.

The Seminary has 12 graduate centers in 6 states, 12 undergraduate centers in 5 states, and 10 on-campus research centers. It has over 3,700 students and trains over 6,000 participants through workshops offered by Providence Learning Center and MissionLab New Orleans. NOBTS also has over 22,000 living alumni.[3]

The main campus is situated on over 70 acres with more than 70 buildings.[4]

NOBTS has been instrumtal in the excavation and uncovery of biblical Timnah[5] and Gezer.[6] 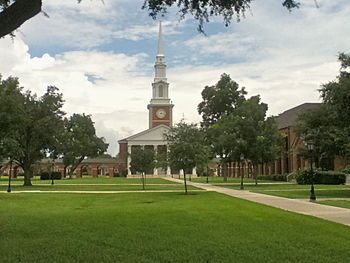 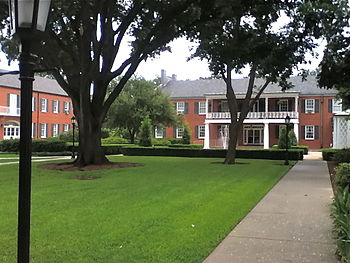 NOBTS has had eight presidents since its founding:

The institutes's purpose was centered on missionary work, and initially established as gateway to Central America. The Seminary started as the Baptist Bible Institute in the Garden District and later relocated to the current location in the heart of Gentilly.

On May 17, 1946, the SBC revised the institutes' charter to enable it to become a seminary, and the name was changed to New Orleans Baptist Theological Seminary. Missions and evangelism have remained the core focus of the seminary.

In the 1950s NOBTS relocated from Washington Avenue in the Garden District to a more spacious campus in New Orleans East. The school purchased a 75-acre (300,000 m2) pecan orchard and transformed it into what is now a bustling campus over 100 buildings, including academic buildings, faculty and staff housing, and student housing.

In August 2005, Hurricane Katrina forced the seminary to evacuate its staff and students. Within a few days, temporary offices were established in Decatur, Georgia. The SBC overwhelmingly voted to keep the seminary in New Orleans and begin the necessary cleanup and repairs.

Following Katrina, the faculty resumed classes at extension centers and online through the Blackboard Learning System. 85% of the students attending NOBTS continued taking classes during the 2005-2006 academic year.

In August 2006 classes fully resumed, and much of the repair had been completed on the campus including the restoration of the Providence Guest House and Leavell Chapel.

Since the completion of main campus buildings, much of the repair is now concentrated on restoring faculty housing and construction of additional buildings. Most, if not all, of the student housing has been restored but at limited capacity. Many of the states housing (housing facilities named after the states in the United States) were demolished with no plans at this time to rebuild them. In addition to repairing facilities damaged or destroyed by hurricane Katrina, the seminary has decided to completely rebuild some buildings to facilitate today's demands. One such building which has been completed is the new Operations Department building which is located at the back of the NOBTS campus.

Between 1977 and 1979, George L. Kelm was serving as professor of Biblical Backgrounds and Archaeology at NOBTS when he and Amihai Mazar uncovered biblical Timnah,[10] Tel Batash in the Sorek Valley of Israel.[11]

In 2010 a team from NOBTS launched an effort to clear a Canaanite Water Shaft at Tel Gezer in Israel in cooperation with the Israeli Nature and Parks Authority and the Israeli Antiquities Authority. Gezer was first explored by R.A. Stewart Macalister over a hundred years earlier, but he did not complete a study of the water system because a freak storm refilled the system with debris and Macalister abandoned the effort.[12]

The NOBTS excavation has been chronicled in multiple sources including the Biblical Archaeology Review[13] and the Baptist Press.[14] In 2011 Dennis Cole, Dan Warner and Jim Parker from NOBTS led another team in an attempt to finish the effort.[15] In just two years the teams removed approximately 299 tons of debris from the ancient water system. The official blog of the Center for Archaeological Research is located at: Can You Dig It?

Since 2005, NOBTS has hosted the Greer-Heard Point-Counterpoint Forum. The Forum is designed to provide a venue in which a respected evangelical scholar and a respected non-evangelical scholar dialogue on critical issues in philosophy, science, religion, and/or culture from their differing perspectives. The forum is not exactly a debate, although by design the speakers necessarily differ in their opinions. Instead, the intention is to provide a model for civil discourse on important topics and an environment in which to discuss differences—without abandoning one's convictions—and to make a case for one perspective over against another.

Forums (past and future)

In additional to the academics provided at NOBTS, the seminary also offers activities for students and their children.

Notable faculty (past and present)