Chaghcharān (Persian: چغچران), in historical literature as Chakhcherān, formerly known as Ahangaran, is a town and district in central Afghanistan, which serves as the capital of Ghor Province. It is located on the southern side of the Hari River, at an altitude of 2,280 meters above sea level.

Chaghcharan is linked by a 380-kilometre-long highway with Herat to the west and about the same distance with Kabul to the east. Due to severe weather, the road is often closed during winter and even in summer it can take three full days to drive from Chagcharan to Kabul.

It has a population of about 15,000, mostly Persian speaking. Chaghcharan Airport is located about 1 mile to the northeast of the town.

The region was home to various people of different religions before Islam was spread by Sultan Mahmud of Ghazni in the 10th century. Among the Zoroastrians, Buddhists and others, there were also some Jews. After the defeat of the Ghaznavids the area fell to the local Ghurids of Ghor in the 12th century.

In the 13th century, the region was invaded by Genghis Khan and his Mongols barbarians. it was ruled by the Ilkhanate until Timur conquest in the 14th century.

Chakhcherān is mentioned by name in the 16th century Baburnama, describing Babur's visit in early 1507 while on his journey to Kabul. It was a town located in the Gharjistan region, between Herat, Ghor, and Ghazni.[1]

In 2004, an independent FM radio station (Persian: راديو صداي صلح or Voice of Peace Radio) came on air in the town, the first independent media in this part of Afghanistan.

Approximately 15,000 people live in the town, making it the largest in the province. The main inhabitants of Chaghcharan are Tajiks (96%), followed by 2% Pashtuns and 2% Hazaras.[2] 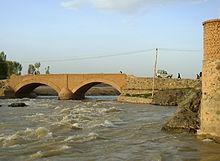 There is an airstrip, Chaghcharan Airport, located northwest of the Hari River, one mile northeast of Chaghcharan. It is approximately 1800 metres in length, unpaved and capable of supporting small to medium sized aircraft. The main road from Changhcharan runs toward Herat in the west and Kabul in the east.