The Arkansas Highway System is made up of all the highways designated as Interstates, U.S. Highways and State Highways in the US state of Arkansas. The system is maintained by the Arkansas State Highway and Transportation Department (ASHTD). The system contains 16,442.90 miles (26,462.28 km) of Interstates, U.S. Routes, state highways, and bannered routes. The shortest members are unsigned state highways Arkansas Highway 806 and Arkansas Highway 885, both 0.09 miles (0.14 km) in length. The longest route is U.S. Route 67, which runs 296.95 miles (477.89 km) from Texarkana to the Missouri Bootheel.

Travel in Arkansas has come from very humble beginnings. In the late nineteenth century, travelers would follow dirt paths riddled with potholes, and ruts. Bicycles would frequently stick in mud puddles. Trains never became popular in Arkansas, and instead travelers would use horse and buggy to get around the state.[2] Around 1890, bicyclists demanded better roads, and a convention was held in Little Rock. At this time, the roads were maintained by a state law that mandated all healthy men of middle age contribute five days of road work (or a monetary equivalent) annually. Another convention in 1907 formed road districts, but this did not help the situation either. Although the need for improvement was obvious, the citizens had trouble finding funding for their goals.[3] In December 1913, Arkansas formed the "Dollarway", which was the name of a concrete road with bituminous surface topping. It was opened near Pine Bluff.[4] By 1914, a segment of 23 miles (37 km) was opened, the longest paved stretch in the United States. Today, the route is mostly covered by Arkansas Highway 365, although some original concrete segments are still visible, and a portion has been preserved by the National Register of Historic Places.[5] 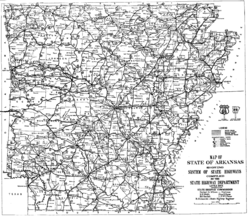 Now that Arkansas had discovered a durable paving system, concrete topped with bitumen of "Dollarway pavement", they could replace the often-broken macadam roads. Dollarway was also a more economical choice, as macadam would frequently need replacing. The next problem facing Arkansas was that "road improvement districts" established in 1907. These districts lacked central organization, there was very limited communication among districts, they were also often headed by novices, and were usually heavily in debt.[6] In 1913, the Arkansas Highway Commission was ordered with the task of organizing the state's road system. In 1915, the Commission was charged with misappropriating funds for officials to use on automobiles and gasoline, making the financial situation even worse. The Alexander Road law of 1915 allowed those close to a route to form their own districts and subsequently contract out the work themselves. This resulted in wild variations of how the same road was paved from district to district and from county to county.[6] The Federal Aid Act of 1921 allowed for funds to be allocated for a state highway system, as long as a central highway authority was in charge of the funds, which was not the case in Arkansas at the time. The Arkansas legislature was slow to create an authority, opting instead to stay with the district approach, which cost the state millions of dollars in funds. District leaders were caught charging exorbitant taxes for road projects, and especially where districts overlapped, bankrupting farmers.[7] The federal government decided to withhold money from states without a unified highway authority. When the Arkansas Legislature again tried to create one, the local judges (usually profiting from the exorbitant district fees) blocked the legislation. Upon withdrawal of federal money in 1923, Governor Thomas McRae called a special session of the Arkansas General Assembly to solve the problem. During this time, many motor inns, such as the Tall Pines Motor Inn in Carroll County, Arkansas or the Crystal River Tourist Camp became favored by motorists over roadside camping.[8] 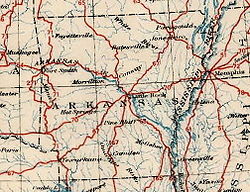 The Harrelson Road Law allowed the State Highway Commission to be formed. The state highway system was first created on October 10, 1923 by the newly formed Commission.[9] The group traced all roads designated as "county roads" onto an official map, which became the official State Highway System of Arkansas on December 31, 1924.[10] This map was kept in Little Rock as the official log of routes. The U.S. Route system came to Arkansas in 1926, and Arkansas gave its state highways numbers to match the national trend of numbered routes. This numbering remains largely intact today.

The Harrelson Road Law also eased the tax burdens of farmers significantly. Property owners wouldn't be fully relieved of financial responsibility until the Martineau Road Law of 1927, when the State of Arkansas assumed all road debt. After assuming this debt, the state added many taxes to the road users instead of the property owners. The State Road Patrol was established in 1929 to police the roads.[11] The State Highway Commission would redesignate Arkansas highways in 1929, including an additional 1,812 miles (2,916 km). The situation would worsen with the Great Depression, when Arkansas was forced to default on many highway loans. The federal Defense Highway Act of 1941 ordered construction funds be used only on important defense highways, but Arkansas' poorly maintained roads needed funding statewide. Governor Sidney Sanders McMath's administration passed a measure where bonds were used to raise maintenance funds. Although the bond measure resulted in lots of much-needed road help, the Highway Department had become corrupt with cronyism during this time. An act passed in 1952 detached the Highway Department from the governor's office and made it autonomous.[12]

The Arkansas Senate requested a feasibility study for designating all roads in the state (except those within municipal areas) as state highways in 1955.[9] If feasible, Arkansas would have likely adopted a system similar to Missouri, which maintains a system of supplemental routes in addition to state highways. Arkansas considered the systems of Delaware, North Carolina, Virginia, West Virginia, Tennessee, Missouri, and Mississippi. The first four states listed previously were the only states to have comprehensive state highway plans at the time. Arkansas decided not to begin a comprehensive program, and instead discovered that thousands of miles should no longer even receive county funding due to heavy population losses.[9] Chief engineer of the Arkansas Highway Department Alfred Johnson was one of the main proponents of the Interstate System, and construction of interstate highways in Arkansas actually began before the system became official in 1956. The state's original five interstates, Interstate 30, Interstate 40, Interstate 55, Interstate 430, and Interstate 540 still exist in large part today.[17] Arkansas had returned to the forefront of the highway world in 1962 because of the interstate system, just as the Dollarway had made Arkansas a leader decades earlier.[18] 1957 brought the Milam Road Act, which created (at minimum) eleven addition miles of state highways in each of Arkansas' 75 counties.

Arkansas still suffers from the impact of the districts. Despite the creation of a highway department and numerous attempts to keep politics away from road funding, the system is still flawed. This is due partly to the nature of Arkansas - citizens prefer to live in many very small communities rather than in small towns (especially in delta region and South Arkansas). This creates more need for connecting highways between these communities. Another cause of inefficiency is the use of Commissioners that represent geographical regions. The regions have not been reapportioned, and this causes the growing Northwest Arkansas region to be treated the same as the shrinking East Arkansas area. [19] Arkansas' highway system was consistently ranked one of America's worst until the AHTD launched a $575 million program in 1999. The project was innovative in its funding as well, raising the diesel fuel tax by four cents and matching federal dollars with state dollars to rehab over 350 miles (560 km) of Interstate highway in 54 separate projects.[20]

The state is in various stages of adding more Interstate highways within its borders. Interstate 555 will serve as a spur to Jonesboro from Interstate 55 upon completion of an access road. Arkansas is also working to bring Interstate 49 along its western edge, eventually connecting Kansas City and New Orleans. This route is being constructed as Arkansas Highway 549 temporarily. The southeast portion of the state is seeing an extension of Interstate 530, which will eventually connect Little Rock to Interstate 69 in Arkansas.

Although U.S. Route 62 runs across the entire state of Arkansas, the first segment terminates after 24.65 miles (39.67 km). This segment runs east from the Oklahoma state line until its junction with I-540 (overpass seen in background) in Fayetteville.

Highways in Arkansas do not commonly form concurrencies with other state highways, they instead exist in many officially designated "sections".[1] These sections are not apparent to the traveler except on mile markers. Because roads often stop and begin elsewhere, it appears that highways repeat themselves in multiple locations, the most recurring being Highway 74. All highways follow this convention in AHTD bookkeeping, including Interstates and U.S. Routes.[1] A route remains a single segment until it meets a route of greater importance, or often a county line. This is the procedure for all highways in Arkansas, unless an officially designated "exception" occurs, which means a concurrency does form. These occur on mile markers and on bridge designation signs, however, mile markers are uncommon in Arkansas, and bridge markers are also frequently missing. Sectioning is used as the rule throughout the state, unless an officially designated "exception" occurs.[1] These exceptions are not common and are the only instances of concurrencies in the State of Arkansas.

State highways in Arkansas are not marked with "Begin" or "End" banners, which can compound the problem. The Arkansas State Highway and Transportation Department does provide by-county Route and Section Maps which show the section number and mileage per section.

Two different Highway 265 route markers. Both are located in Washington County. The left sign was posted by an independent sign contractor. Note the change in the southeast border of the state, and also the angular nature of the Missouri Bootheel.

Two-digit U.S. and Arkansas highways are marked with a 24-by-24-inch (61 × 61 cm) black sign with black numbers contained within a white outline of Arkansas, with three-digit shields using a 24-by-36-inch (61 × 91 cm) area. The Arkansas state outline is more realistic on the one- and two-digit shields, because on three digit shields, the state is stretched to fit the third number. One-digit routes use MUTCD Series D, two-digit routes use MUTCD Series C, and three-digit routes use MUTCD Series B font. The exception is if a three-digit shield includes a "1", such as "100" or "314", in which case Series C is used. There are many variations of the Arkansas outline across the state, usually adjusting the Arkansas-Mississippi border. These range from from fairly accurate, to blocky and distorted. The state line, in reality, is indeterminate along the Mississippi River.[21]

Interstate Highways in Arkansas are signed with the state's name on every shield, with two-digit shields being 36 by 36 inches (91 × 91 cm), while three-digit shields are 36-by-42-inch (91 × 110 cm), and 24 by 24 inches (61 × 61 cm) and 25 by 30 inches (63 × 76 cm), respectively, on intersecting roads. In the field, however, shields sometimes lack the "Arkansas" banner, often use non-standard numbering font, and are frequently too large or small. Arkansas does not have any bannered interstate routes.

Arkansas uses the 1970 standard U.S. Route shields throughout the state, though in practice some of the 1961 revisions still exist. Bannered U.S. routes include a "B" for business routes or a "S" denoting a spur route. This in not standard MUTCD practice.

Although routes are sometimes dually signed (I-540 and US 71 in Northwest Arkansas for example) due to Arkansas' use of concurrencies, the actual pavement belongs to either the one highway or the other, not both.

County highway systems in Arkansas use a variety of signs, and vary widely from one county to another.

The U.S. Forest Service maintains Federal Forest Highways in Arkansas within the National Forests of Arkansas.