A supplemental route is a state secondary road in the U.S. state of Missouri, designated with letters. Supplemental routes were various roads within the state which the Missouri Department of Transportation was given in 1952 to maintain in addition to the regular routes. The goal of the secondary highway system was to place state-maintained roads within two miles (3 km) of more than 95% of all farm houses, schools, churches, cemeteries and stores. The four types of roads designated as Routes are:

The more major supplemental routes of the system are assigned single-letter designations (such as "K"). Minor branch routes and farm-to-market roads, which often end at county roads or are former alignments of other highways, are typically assigned two-letter designations consisting of two of the same letter (e.g. "KK"). Additionally, combinations of letters may be used, but always with "A" as the first letter (such as "AD"). The only exception is Route BA found in western St. Louis County.

The letter "R" is reserved for the first letter of supplemental routes which connect with state parks or other recreational facilities. Route AR, a non-recreational route south of Bakersfield, is the only exception to this.

These routes rarely run for more than a few miles, though they may cross county lines. At a U.S. Route or interstate, they change letters, for example, in Greene County, southbound Route J crosses U.S. Route 60 and becomes Route NN. But when Route MM crosses Route 360, it remains Route MM, only changing into Route B when crossing Interstate 44. The names are also reused, but not near one another. No letter is reused in a county. Route D exists in Greene County, Newton County, St. Louis County, and in several other counties. 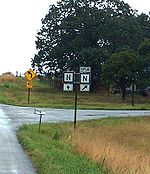 Supplemental routes are signed by black letters on a white background with a black border. Rarely, the shields will be marked with banners such as EAST, WEST, or END. There are no business or bypass routes for the roads; however, five examples exist of spur routes: Spur Route N in Cedar County, Spur Route C in Gentry County, Spur Route K (into East Lynn) in Cass County, Spur Route AA (to the Sappington Cemetery State Historic Site) in Saline County, and Spur Route Y in Montgomery County.

It is erroneously believed that due to these roads being designated by letters rather than numbers and their existing in more than one county that these roads are county roads, not state highways, with some businesses and residences located on these roads saying their address is "County Road A" for example. This may have also arisen from the signage used prior to the early 1960s, where the letter was painted black against a white background, with the words "STATE ROAD" above the letter and the county name (in all capital letters) below the letter.