The Oakland Tribune is a daily newspaper published in Oakland, California, by the Bay Area News Group (BANG), a subsidiary of MediaNews Group. Since 2010, it has been published as an edition of the BANG flagship newspaper, the San Jose Mercury News.

The final edition of the newspaper under the name The Oakland Tribune was scheduled to be published on November 1, 2011, however BANG announced on Oct. 27, 2011 that it would retain the masthead and include the Alameda Times-Star under The Oakland Tribune. Other mastheads to be retained included Hayward Daily Review, Fremont Argus and West County Times which were to be combined under a new East Bay Tribune title.[1]

The Tribune was founded February 21, 1874, by George Staniford and Benet A. Dewes. The Oakland Daily Tribune was first printed at 468 Ninth St. as a 4-page, 3-column newspaper, 6 by 10 inches. Staniford and Dewes gave out copies free of charge. The paper had news stories and 43 advertisements.

Staniford, the editor and Dewes, the printer, were credited with producing a paper with fine typographical look and editorial nature. The competition was the Oakland News and Oakland Transcript. The first editoral stated, "There seems to be an open field for a journal like the Tribune in Oakland, and we accordingly proceed to occupy it, presenting the Tribune, which is intended to be a permanent daily paper, deriving its support solely from advertising patronage."

The Tribune was a solid Republican newspaper under Dargie and (later) the Knowlands. Dargie was a news innovator in several ways: 1876, wire service dispatches; 1877, a book and job department added; 1878, when the Bell Telephone System arrived in Oakland, one of the first telephones was installed at the Tribune- Number 46; 1883, a Saturday edition was introduced; 1887, special editions; 1888, an extra for the presidential election.

The Tribune was a charter member of the Associated Press upon its founding in 1900.

Among Dargie's hires, at the turn of the century, was Jack Gunin, a one-eyed lensman, the first full-time photojournalist in the Western United States.

Early in 1906, the Tribune printed a Sunday edition, making it a full seven-day newspaper.

The Tribune and the 1906 earthquake

The newspapers of San Francisco were destroyed in the earthquake and fire of April 18, 1906. The Tribune printed many "extras." Dargie lent the Tribune's presses for a joint edition of the San Francisco Examiner-Chronicle-Call. In the aftermath of the conflagration, San Francisco Mayor Eugene E. Schmitz, declared the Oakland Tribune the official San Francisco newspaper.

The circulation grew as displaced San Franciscans moved to Oakland and Alameda County. The Tribune's editorial direction was then under Managing Editor John Conners. After 35 years as publisher, William E. Dargie died on February 10, 1911. Former Oakland Mayor Melvin C. Chapman served as acting president of the Tribune Publishing Company. Bruno Albert Forsterer (1869–1957), was publisher and general manager. He was executor of Dargie's estate. Bruno and his son, Harold B. Forsterer, also served the Knowlands and the Tribune. 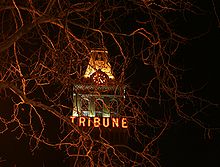 The Tribune Tower was the headquarters of the Oakland Tribune from 1924 until 2007.

After five terms in the United States House of Representatives, Joseph R. Knowland (1873–1966) purchased the Oakland Tribune from Dargie's widow, Hermina Peralta Dargie. In his first edition as publisher of the Oakland Tribune, November 14, 1915, he wrote, "It is perfectly understood that what the Tribune does, rather than what it promises, will determine the true measure of its worth; and with that understanding, the Tribune, under its new control, girds to its work."

Knowland moved the Tribune to a new location at 13th and Franklin Streets on March 25, 1918. Under Knowland, the Tribune became one-third of a triumvirate of California Republican newspapers with conservative viewpoints, along with the Los Angeles Times and San Francisco Chronicle. The Tribune endorsed Republican candidates and J.R. often picked and controlled Republican elected officials. The Tribune would make many political careers, the most noted being Knowland's own son William F. Knowland and Earl Warren.

In 1921, Knowland started radio station KLX and his newspaper library. The Tribune Tower, an Oakland landmark, was opened for business January 1, 1924. The Tribune Publishing Corporation, was founded by Knowland on January 4, 1928. The publishing corporation held interests in KLX , part owner of a paper mill in Tacoma, Washington and subsidiary businesses, U-Bild, Tower Graphics and Tribune Features, Inc.

In the mid-1930s, J.R. tied in with the Associated Press Wirephoto Service. He had a direct wire link for international news from London, England. The mast head logo, which became an icon of the paper, showed Oakland, a port to the world and nation. The logo changed with the times: the Tower, transport ship and steam locomotive; in later years, the Tower, the Bay Bridge, larger transport ship, diesel engine, the china clipper and later, a jet airplane.

On September 1, 1950, the Tribune became the sole Oakland daily newspaper, with the demise of its competitor, William Randolph Hearst's Oakland Post Enquirer.[2]

On February 1, 1966, Joseph R. Knowland died at the age of 92. William F. Knowland was appointed president and publisher. His son, Joseph William Knowland became vice-president and general manager. Bill Knowland added to the logo, A Responsible Metropolitan Newspaper. The Senator had assumed duties as the Tribune's publisher and editor. He became the president of The Tribune Publishing Corporation.

Under Bill Knowland's ownership, the Tribune had a conservative editorial position and a reputation for being strongly pro-business. As the city of Oakland became more ethnically and politically diverse in the 1960s and 1970s, the Tribune was unable to respond quickly enough to the demographic changes (and the political and social unrest exemplified, among other factors, by the University of California, Berkeley, student uprisings and the Black Panther movement).

The Tribune's readership declined after the early 1960s as a large portion of the paper's traditional subscription base relocated to the newly developing suburbs south and east of Oakland. In southern Alameda County, the readership went to Floyd Sparks's The (Hayward) Daily Review and in Contra Costa County to Dean Lesher's Contra Costa Times.

In 1973, Bill Knowland wrote in Fortune magazine, "Any city needs a means of communication between the diverse members of its community. Communication is essential."

The California Press Association honored Joseph W. Knowland, as the winner of the 1975, Publisher of the Year award. This honor was bestowed on Joe Knowland for his progressive innovations in the operations and makeup of the newspaper.[3]

End of the Knowland Era: CCC and Gannett

In 1977, the Knowland Family sold the Oakland Tribune to Combined Communications Corporation, owned by Arizona-based outdoor sign mogul Karl Eller. The Tribune Publishing Corporation, was dissolved by the Knowland Family. Eller had recently acquired The Cincinnati Enquirer. In 1979, CCC merged with the East Coast-based media conglomerate Gannett, and the Tribune was thus acquired by Gannett. That year, Allen H. Neuharth, Gannett CEO, used the Tribune as a pilot project with a new morning paper called Eastbay Today, which served as an early prototype of Gannett's later national paper USA TODAY. The Tribune was switched from its traditional role as an evening paper to a morning paper. In 1979 Gannett named Robert C. Maynard (1937–1993) editor.

In 1983, the Tribune was purchased, for $17 million, in a loan, from Gannett to Robert C. Maynard and his wife, Nancy Hicks Maynard, in the first management-led leveraged buyout in U.S. newspaper history. It thus became the first major metropolitan newspaper owned by an African American; this was seen as especially notable as Oakland was developing a relatively large African-American community which, by the 1980s, was becoming increasingly influential in local business and politics. Maynard helped restore the paper's reputation but the Tribune still was plagued by financial difficulties. Facing a debt of $31.5 million and about to close in August 1991, the Tribune was saved by the Freedom Forum, Allen H. Neuharth's media foundation. The Freedom Forum paid Gannett $2.5 million, retired the Tribune's debt and gave Maynard $5 million in operating funds. However, in 1992, the Maynards began to seek a buyer, under continuing financial pressures.

On October 15, 1992, the Alameda Newspaper Group, a division of MediaNews Group that published several competing suburban community newspapers, agreed to buy the Oakland Tribune for $10 million from the Maynards. As a result, the Tribune is no longer considered the dominant East Bay newspaper.

The Tribune Tower was severely damaged in the Loma Prieta earthquake of October 17, 1989; it was closed and dark for many years.

The editorial staff of the ANG Tribune had offices at Jack London Square in the years following the Loma Prieta earthquake and today, some of the editorial have been returned to the old newspaper building; the landmark Tribune Tower clock has been relighted. The paper is printed at the Arden plant in Hayward.

The group's entry into the computer age was first discussed at the 1983 International Typographical Union convention; newspaper internet websites came of age in the mid- and late-1990s. The ANG official website is InsideBayArea.com for the online Oakland Tribune; the website is shared with other ANG/MediaNews newspapers.

On May 20, 2007, the Oakland Tribune moved to new offices on Oakport Street, across Interstate 880 from the Oakland Coliseum. This ended a long tenancy of the downtown Tribune tower, which will still remain due to its landmark status.[4]

On August 2, 2007, Oakland Post editor and former (1993–2005) Tribune journalist Chauncey Bailey was murdered in a targeted hit on his way to work.[5] This led the Tribune to start "The Chauncey Bailey Project", a series of articles focusing on the causes and aftermaths of the murder.

The Oakland Tribune won the Pulitzer Prize for a photograph of a small private plane narrowly missing a B-29 Superfortress in 1950, and again for photographs of the aftermath of the October 17, 1989, Loma Prieta earthquake.[citation needed]

The majority of this article is from the History of the Oakland Tribune.