It consists of three contiguous segments: the Warren Freeway from I-580 to State Route 24 in Oakland; Tunnel Road, a narrow two-lane road to Claremont Avenue in Berkeley; and Ashby Avenue, a main east–west street through south Berkeley to I-80/I-580.

The route currently begins at Interstate 580 near Mills College in East Oakland and continues north as the Warren Freeway, named after former California Governor and U.S. Supreme Court Chief Justice Earl Warren. The four-lane freeway takes a largely straight path as it runs through a scenic valley, part of which spans between Piedmont and Oakland's Montclair Village. This valley is a rift valley created by the Hayward Fault Zone, and the entire freeway lies within the earthquake fault zone of the Hayward Fault. In the event of a major earthquake on the fault, this section of SR 13 may sustain heavy damage. Numerous overpasses have recently undergone extensive seismic retrofitting.

The city of Piedmont perches on the west-facing hills, which give an imposing shadow over the highway at sunset. The tall trees on the highway's side make the highway appear narrower, and until late 2004, a dense group of trees also lined most of the highway's median. For most of the day, the freeway experiences only modest traffic, which makes it a speedy bypass around downtown Oakland. Much of the traffic on this highway comes from SR 24's commute hour congestion backing up onto SR 13 northbound via the exchange between the highways. On a clear day, the Oakland segment of the freeway offers some spectacular views of the San Francisco Bay Area. 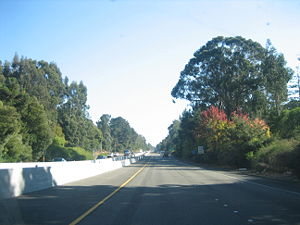 After going through an interchange with State Route 24 (completed August 1999) near the entrance to the Caldecott Tunnel, however, SR 13 takes drastic changes in its quality and capacity. The freeway ends at an uphill junction and the route is defaulted onto Tunnel Road, a much more narrow two-lane road that bends to the west and winds downhill. Upon reaching the foot of the hill, Tunnel Road becomes Ashby Avenue, a markedly urban (and very busy) two-lane street with an east–west routing. Entering Berkeley, UC Berkeley is north on Telegraph Avenue, while a BART station is located at Adeline Street. Past San Pablo Avenue (SR 123), Route 13 (as Ashby Avenue) runs through a more modest neighborhood before reaching its current end at Interstate 80/Interstate 580.

SR 13 was created to accommodate the construction of the Grove-Shafter Freeway, now designated State Route 24. Before the construction of the Grove-Shafter, Ashby Avenue was State Route 24, while the balance of the route of today's Warren Freeway was not a designated state highway. The main thoroughfare through the Montclair District in those days was Mountain Blvd.

State Route 13 was formed out of the 1964 state highway renumbering. Before its designation, it was known as several different legislative route numbers, including 258 from Interstate 580 to present-day SR 61, and 227 from Warren Boulevard to U.S. Route 50. This latter segment was not finished in 1963 and only existed from SR 24 to Joaquin Miller Road. However, the finished portion along Warren Boulevard was commissioned as part of the state highway system in 1947.

Route 13 was to have been a freeway bypass of Oakland and Berkeley and would have extended south from its present end to the Nimitz Freeway (Route 880). (State law describes an even longer Route 13, which would start further south at Route 61 and end at an unconstructed part of Route 61 west of Emeryville. The latter end would require an interchange over water. However, local resistance to further freeway construction in Oakland prevented the extension. Similar resistance in Berkeley has kept Route 13 from being built as a freeway north of Route 24, hence its role as a surface street.

In August 2004, Caltrans began replacing the median's original metal guardrails with a new wall along the 3.5-mile (5.6 km) stretch of SR 13 between SR 24 and I-580. This allowed road crews to drive street-sweeping vehicles along the shoulders throughout the week, rather than sending people to pick up trash by hand. However, residents frequenting SR 13 have said that the median appears to be filled with fewer trees and bushes than prior to Caltrans construction. These trees once densely lining the median have long supplemented the lush vegetation on both sides of the highway to beautify this scenic route. [5]

Note: Except where prefixed with a letter, postmiles were measured in 1964, based on the alignment as it existed at that time, and do not necessarily reflect current mileage.

The entire route is in Alameda County.