Interstate 880 (I-880) is an Interstate Highway in the San Francisco Bay Area connecting San Jose and Oakland, running parallel to the southeastern shore of San Francisco Bay. For most of its route, I-880 is officially known as the Nimitz Freeway after World War II fleet admiral Chester Nimitz, who retired to the Bay Area and lived on Yerba Buena Island.

This route is part of the California Freeway and Expressway System.[2]

The southern terminus of I-880 is at its interchange with Interstate 280 and State Route 17 in San Jose. From there, it heads roughly northeast past the San Jose International Airport to U.S. Route 101. The Nimitz Freeway then turns northwest, running parallel to the southeastern shore of San Francisco Bay, connecting the cities of Milpitas, Fremont, Newark, Union City, Hayward, and San Leandro before reaching Oakland. In Oakland, I-880 passes by Oakland International Airport, Oakland-Alameda County Coliseum and Downtown Oakland. The northern terminus of I-880 is in Oakland at the junction with Interstate 80 and Interstate 580 (known as the MacArthur Maze), near the eastern approach of the Bay Bridge.

I-880 between I-238 in San Leandro and the MacArthur Maze is used as an alternate truck route; trucks over 4.5 tons are prohibited through Oakland on I-580.[3]

Prior to 1984, the route known as I-880 used to be part of State Route 17. SR 17 used to run from Santa Cruz all the way through San Jose, Oakland; and then continued north via the Eastshore Freeway (Interstate 80) through Richmond to the Richmond-San Rafael Bridge and San Rafael.

In 1947, construction commenced on a freeway to replace the street routing of SR 17 through the East Bay. The new freeway was named the "Eastshore Freeway", and with the subsequent addition of a freeway to replace the Eastshore Highway north of the MacArthur Maze in the mid 1950s, it ran, appropriately, almost the entire length of the east shore of San Francisco Bay. In 1958, the portion south of the MacArthur Maze was re-named the Nimitz Freeway in honor of WWII Admiral Nimitz, while the portion to the north retained the name Eastshore Freeway.

The northern portion of I-880 was designated Business U.S. Route 50 for a time between the I-80 interchange and downtown Oakland.

Original routing of I-880 in Sacramento 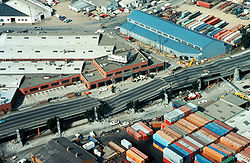 Portion of the collapsed Cypress Viaduct in Oakland.

A large double-decker section in Oakland, known as the Cypress Street Viaduct, collapsed during the 1989 Loma Prieta earthquake, causing 42 deaths. This was the greatest loss of life caused by that earthquake. Rebuilding the affected section of the freeway took nearly a decade, due to environmental impact concerns, the feeling that the freeway divided the neighborhood, and design considerations. The freeway reopened in 1997 on a new route parallel to railroad tracks around the outskirts of West Oakland.

Although only about three miles (5 km) in length, the replacement freeway cost over $1.2 billion, for several reasons: it crossed over and under the elevated BART line to San Francisco; it squeezed between a post office, the West Oakland BART station, the Port of Oakland, a rail yard, and a sewage treatment plant; it occupied an entirely new right-of-way, which required the acquisition of large amounts of valuable industrial real estate near the Port of Oakland; and of course, it had to be earthquake-proof.

The former path of the structure, Cypress Street, was renamed Mandela Parkway, and the median where the freeway stood became a landscaped linear park.[23]

Several aspects of the I-880 facility have been constructed in designated floodplains such as the 1990 interchange improvements at Dixon Landing Road. In that case the Federal Highway Administration was required to make a finding that there was no feasible alternative to the new ramp system as designed. In that same study, the FHWA produced an analysis to support the fact that adequate wetlands mitigation had been designed into the improvement project.[24]

Due to high sound levels generated from this highway and the relatively dense urban development in the highway corridor, Caltrans has conducted numerous studies to retrofit the right-of-way with noise barriers. This activity has occurred in Oakland, San Leandro, Hayward, Newark and Fremont. During the 1989 widening of I-880 in parts of Newark and Fremont, scientific studies were conducted to determine the need for sound walls and to design optimum heights to achieve Federal noise standards.[25]

For more details on this topic, see MacArthur Maze.

On April 29, 2007, a gasoline tanker overturned and caught fire on the connector between westbound I-80 and southbound I-880 on the MacArthur Maze interchange. The fire caused major damage to both this connector and one directly above (eastbound I-80 onto eastbound I-580). The overpass was replaced and re-opened 27 days later. The governor, Arnold Schwarzenegger, declared it as a State of emergency and all public transportation was free on the first commute day.[26]

In 2010 improvements to the I-280/I-880 and Stevens Creek Boulevard interchanges were made. Previously, both interchanges shared a handful of ramps, but they are now independent from one another.[27]

The I-880 Corridor Improvement Project, one of the last seismic retrofit projects of a major transportation corridor in California, consists of eight separate projects located in a 15-mile segment of the freeway between Oakland and Hayward. [28][29]

The individual projects included in the I-880 Corridor Improvement project are the retrofitting or replacement of the 5th Avenue, 23rd Avenue, 23rd Avenue, Fruitvale Avenue, and High Street bridges in Oakland; improvements to both the I-238 and Highway 92 interchanges (the latter, a four year project, completed in October 2011)[32]; and an overall rehabilitation/repaving project along the entire segment. Construction will take place from 2006 to 2014, although individual project schedules vary. The total cost of the project is $462.7 million, provided by federal, state, and regional funds.