The Force de Frappe (French: strike force) is the designation of what used to be a triad of air-, sea- and land-based nuclear weapons intended for dissuasion, and consequential deterrence. The French Nuclear Force, part of the Armed Forces of France, is the third largest nuclear-weapons force in the world, following the nuclear triads of the Russian Federation and the United States.

In March 2008, President Nicolas Sarkozy of France confirmed reports giving the actual size of France's nuclear arsenal, and he announced that France will reduce its French Air Force-carried nuclear arsenal by one-third, leaving the Force de Frappe with just under 300 warheads.[1]

The decision to arm France with nuclear weapons was made in the mid-1950s by the administration of Pierre Mendès-France under the Fourth Republic. President Charles de Gaulle, upon his return to power in 1958, solidified the initial vision into the well-defined concept of a fully independent Force de Frappe capable of protecting France from a Soviet or other foreign attack, independent of the North Atlantic Treaty Organization, which President de Gaulle considered to be dominated by the United States to an unacceptable degree. In particular, France was concerned that in the event of a Soviet invasion of Western Europe, the United States - already bogged down in the War in Vietnam and afraid of Soviet retaliation against the United States proper - would not come to the aid of its Allies in Western Europe.

The strategic concept behind the Force de Frappe was the so-called dissuasion du faible au fort (Weak-to-strong deterrence), i.e., the capability of inflicting to a more powerful enemy more damage than the complete destruction of the French population would represent. The enemy, having more to lose, would therefore refrain from proceeding any further (see Mutual Assured Destruction). This principle was summarized in a statement attributed to President de Gaulle himself:

France carried out its first test of an atomic bomb in Algeria in 1960[4] and some operational French nuclear weapons became available in 1964. Then, France executed its first test of the much more powerful hydrogen bomb over its South Pacific Ocean test range in 1966. This first hydrogen bomb was air-dropped from a strategic bomber - in an already weaponized form.

President de Gaulle's vision of the Force de Frappe featured the same triad of air-based, land-based, and sea-based means of deterrence already deployed by both the United States and the Soviet Union. Work on these components had started in the late 1950s and was vigorously accelerated as soon as de Gaulle became the President of France.

Initially, the Force de Frappe consisted of an air-based component only around the newly developed Dassault Mirage IV strategic bomber, designed to carry gravity bombs over targets in the Eastern bloc. This component was declared operational in October 1964 and has been continually modernized since then. The bomber version of the Mirage IV was retired in 1996 and replaced by the Mirage 2000 N and Dassault Rafale F3 with new ASMP-A missile. 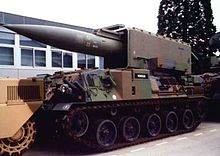 The land-based component of the French nuclear triad was added in August 1971 with the operational readiness of the 18-silo Intermediate Range Ballistic Missile arsenal at the Plateau d'Albion in the Vaucluse region of southern France. Later, this land-based component was augmented with the mobile short-range Pluton missile and Hadès missile, which were designed to be launched from the front lines at any approaching foreign army. To defend against a Soviet/Warsaw Pact invasion of West Germany, these could be deployed with the French Army in the French Zone of Germany in westmost Germany.

Since the French military judged that a full-scale invasion of Western Europe by the Soviet Union and its Warsaw Pact Allies was unlikely to be stopped by conventional armaments, these short-range nuclear missiles were meant as a "final warning" (ultime avertissement in French) which would tell the aggressor that any further advances would trigger a nuclear armageddon upon its major cities and other important targets.

The Pluton missile, introduced in 1974, was retired from service and scrapped beginning in 1993, and its successor, the Hadès missile, was just produced in limited numbers during the early 1990s, and then withdrawn from the Army and placed in arsenal storage in 1995. Next, the French Government decided to eliminate all of these missiles, and the last Hadès was dismantled on June 23, 1997. That was the end of the French mobile land-based nuclear missiles.

The French fixed IRBMs at the Albion missile base, were considered to be approaching obsolescence, and also deemed to be no longer necessary following the fall of the Soviet Union, were also disposed of, and the Albion missile base was permanently shut down in 1999. Thus, the land-based missile leg of the French nuclear triad has been eliminated.

The ocean-based, mobile component of the French nuclear triad entered service in December 1971 with the commissioning of its first ballistic missile submarine, the nuclear submarine Le Redoutable, which carried 16 M4 Intermediate Range Ballistic Missiles similar to the American and British Polaris missiles.

Since then, the ocean-based French nuclear deterrent has been expanded to a squadron of four submarines, two of which are always kept out of port and on patrol.[5] Also, since 1985, some of the French ballistic missile submarines have grown old and obsolescent, have been retired from service, and have been replaced by newer missile submarines, also with 16 missile tubes apiece, and carrying more-advanced French M45 missile. A new submarine Le Terrible was put into service on 20 September 2010 armed with the M51 missile similar to the American Trident II.

France no longer possesses land-based nuclear missiles. The IRBM base at the Plateau d'Albion (Vaucluse region) was deactivated in 1999, and its missiles scrapped. All French Army units equipped with short-range missiles such as the Pluton and the Hadès have also been disbanded, and their missiles scrapped.

All of the nuclear warheads from the above have been dismantled, and their fissile nuclear materials recycled.

The French Navy includes a nuclear strategic branch, the Force Océanique Stratégique, which has contained as many as five nuclear-powered ballistic missile submarines.

The last of these ballistic missile submaries, the L'Inflexible (S 615) was retired from service and sent to the boneyard in 2008.

It is estimated that France has about 60 ASMP medium-range air-to-ground missiles with nuclear warheads,[7] of which:

The actual locations of all of the nuclear missiles is always a tightly-held secret (there is several storages facilities known but the number of heads inside is highly classified and for safety reasons it often changes).