A nuclear triad refers to a nuclear arsenal which consists of three components, traditionally strategic bombers, ICBMs and SLBMs. The purpose of having a three-branched nuclear capability is to significantly reduce the possibility that an enemy could destroy all of a nation's nuclear forces in a first-strike attack; this, in turn, ensures a credible threat of a second strike, and thus increases a nation's nuclear deterrence.[1][2][3]

While traditional nuclear strategy holds that a nuclear triad provides the best level of deterrence from attack, in reality, most nuclear powers do not have the military budget to sustain a full triad. Only the United States and Russia have maintained nuclear triads for most of the nuclear age.[3] Both the US and the Soviet Union composed their triads along the same lines, including the following components:

The triad also gives the commander the possibility to use different types of weapons for the appropriate strike:

Tactical nuclear weapons are used in air, land and sea warfare. Air-to-air missiles and rockets, surface-to-air missiles, and small air-to-ground rockets, bombs, and precision munitions have been developed and deployed with nuclear warheads. Ground forces have included tactical nuclear artillery shells, surface-to-surface rockets, land mines, medium and small man-packable nuclear engineering demolition charges, even man-carried or vehicle-mounted recoilless rifles. Naval forces have carried nuclear-armed naval rocket-assisted and standard depth charges and torpedoes, and naval gunnery shells. Tactical nuclear weapons and the doctrine for their use is primarily for use in a non-strategic warfighting role destroying military forces in the battle area; they are not counted toward triad status. 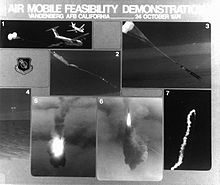 There is nothing in nuclear strategy to mandate only these three delivery systems. For example, orbital weapons or spacecraft for purposes of orbital bombardment using nuclear devices have been developed and silo deployed by the USSR from 1969 to 1983, these would not fit into the categories listed above. However, actual space-based weapon systems used for weapons of mass destruction have been banned under the Outer Space Treaty and launch ready deployment for the US and former USSR by the SALT II treaty. Another example is the US, UK, and France do or have previously included a strategic nuclear strike mission for carrier-based aircraft, which especially in the past were far harder to track and target with ICBMs or strategic nuclear bombers than fixed bomber or missile bases, permitting some second-strike flexibility; this was the first sea-based deterrent before the SLBM. The US and UK jointly explored an air-launched strategic ballistic nuclear missile, the Skybolt, but canceled the program in favor of submarine-based missiles. In 1974 a Lockheed C-5 Galaxy successfully tested an air launch of a Minuteman ICBM; this system was not deployed, but was used as a bargaining point in the SALT treaty negotiations with the USSR.