The Dassault Mirage IV was a French jet-propelled supersonic strategic bomber and deep-reconnaissance aircraft. For many years it was a vital part of the nuclear triad of the Force de Frappe, France's nuclear deterrent striking force.

Work on a supersonic bomber able to carry a nuclear bomb started in France in 1956 as part of the development of France's independent nuclear deterrent. The final specifications, jointly defined by government authorities and Dassault staff, were approved on 20 March 1957. Dassault's resulting prototype, dubbed Mirage IV 01, looked a lot like the Mirage IIIA, even though it had double the wing surface, two engines instead of one, and twice the unladen weight. The Mirage IV also carried three times more internal fuel than the Mirage III. The aircraft's aerodynamic features were very similar to the III's but required an entirely new structure and layout.

The 01 was an experimental prototype built to explore and solve the problems stemming from prolonged supersonic flight. The sizable technological and operational uncertainties (no plane had yet been found able to cruise at over Mach 1.8 for long periods of time) were only one part of the problem. The weapon-related issues were the other.

It took 18 months to build the 01 in Dassault's Saint-Cloud plant near Paris. In late 1958, the aircraft was transferred to the Melun-Villaroche flight testing area for finishing touches and ground tests.

In order to increase range, studies were made of a significantly larger Mirage IVB design, powered by two Pratt & Whitney J75 engines and having a wing area of 120 m² (1,290 sq ft) compared to 70 m² (750 sq ft) of the prototype IV. When this was in turn considered to be too expensive, the medium-sized Mirage IVA, slightly larger than the first prototype, was chosen for three more prototypes to be produced.[1]

The prototype Mirage IVA-02 was flown on 12 October 1961, and was accepted for serial production. The first production Mirage IVA was flown in December 1963.[2] A series of 62 aircraft were built, and they entered service between 1964 and 1968.

The Mirage IV is similar in design layout to the Mirage fighters, featuring a tailless delta wing and a single square-topped vertical fin. It has two SNECMA Atar turbojets in the rear fuselage, with air intakes on both sides of the fuselage that had intake half-cone shock diffusers, known as souris ("mice"), which were moved forward as speed increased to reduce inlet turbulence. It can reach high supersonic speeds: the aircraft is redlined at Mach 2.2 at altitude because of airframe temperature restrictions, although it is capable of higher speeds. The aircraft has 14,000 liters (3,700 gal (US)) of internal fuel, and its engines are quite thirsty, especially in afterburner.

The crew of two (pilot and navigator) are seated in tandem cockpits under separate canopies. A bombing/navigation radar is housed within a radome in the fuselage under the intakes, aft of the cockpit. In 1980s, the Martin-Baker Mark 4 ejection seats were also apparently upgraded to Mark 6 standard, providing true "zero-zero (zero speed, zero altitude)" ejection capability.[3] A refueling boom is built into the nose and figures prominently in Mirage IV operations.

The Mirage IV has two pylons under each wing, with the inboard pylons being normally used for large drop tanks of 2,500 liter (660 gal (US)) capacity. The outer pylons carry ECM and chaff/flare dispenser pods to supplement the internal jamming and countermeasures systems. On current aircraft, these are typically a Barax NG jammer pod under the port wing and a Boz expendables dispenser under the starboard wing. No cannon armament was fitted. The early Mirage IVA had a fuselage recess under the engines for a single AN-11 or AN-22 nuclear weapon of 60 kt yield.

From 1972 onward, 12 aircraft were also equipped to carry the CT52 reconnaissance pod in the bomb recess. The CT52 is available in either BA (Basse Altitude, low-level) or HA (Haute Altitude, high-altitude) versions with three or four long-range cameras. A third configuration is an infrared line scanner. None of the CT52 has any digital systems, relying on older 'wet' film cameras.

Later Mirage IVP aircraft could be fitted a single centerline pylon for the ASMP stand-off missile.

The Mirage IVA could theoretically carry up to six large conventional bombs at the cost of drop tanks and ECM pods, but such armament was rarely fitted in practice.

In 1963, the Australian government sought a replacement for the Royal Australian Air Force fleet of English Electric Canberra bombers. Dassault proposed a version of the Mirage IVA with Rolls-Royce Avon engines. The IVA was one of five aircraft types short listed but the General Dynamics F-111C was eventually selected.[4][5]

In 1965, when the British Government cancelled the BAC TSR-2 reconnaissance-strike aircraft, Dassault proposed a modified version of the Mirage IV as a replacement. The modified aircraft, known as the Mirage IV* was to use more powerful Rolls-Royce Spey turbofan engines and avionics planned for the TSR-2. While the IV* was claimed to meet most of the RAFs requirements, and to be £1 million cheaper than the American F-111, the F-111 was preferred (only to be cancelled in turn) and the Spey-engined Mirage abandoned.[6][7]

In February 1964 deliveries of the Mirage IV to the French Air Force started, with the first French strategic bombing squadron being declared operational on 1 October that year.[8] The Mirage IV bomber force, when fully built up, consisted of three wings. These wings were each divided into three bomber squadrons, each with four Mirage IVs, each deployed at a different base to minimise the potential for an enemy strike to knock out the entire bomber force. These squadrons were:[9]

After establishment of its own deterrent force (the Force de Dissuassion, more commonly known as the Force de frappe, France quit the military command structure of NATO in 1966.[10]

The primary objectives of the Mirage IVA force were major Soviet cities and bases. With aerial refueling, the plane was able to attack Moscow, Murmansk or Ukrainian cities from French bases. In order to refuel the Mirage IVA fleet, France purchased a number of U.S. C-135F tankers. Mirage IVAs also often operated in pairs, with one aircraft carrying a weapon and the other carrying fuel tanks and a buddy refueling pack allowing it to refuel its mate en route to the target. Even so, some sources state that some of the mission profiles envisioned were actually one-way, with the crew having no chance of returning after bombing a Soviet city.[11]

Initially, the basic attack flight profile was "high-high-high" at a speed of Mach 1.85, engaging targets up to a maximum radius of 3,500 km (2,175 mi). In the late 1960s, when the threat of surface-to-air missile defences made high-altitude flight too hazardous, the Mirage IVA was modified for low-altitude penetration. Flying low, the maximum attack speed was reduced to 1,100 km/h (680 mph) and the combat radius was also decreased.

By the 1970s it was clear that vulnerability of the Mirage IV to air defences (even in low-level flight) made the delivery of gravity bombs like the AN-11 or AN-22 impractical. As more of the deterrent role was passed to land-based IRBMs and submarine-based missiles, one wing of Mirage IVs was stood down in 1976,[12] while in 1979, in response, to the decreasing effectiveness of the free-fall bombs used by both its strategic and tactical nuclear forces, the French commenced development of the ASMP stand-off missile, with a range of up to 400 km (250 mi) and a single 150 or 300 kt nuclear warhead.[13] Eighteen Mirage IVAs were modified to carry the new weapon instead of bombs and received the new designation Mirage IVP (Penetration).[13][14] The first Mirage IVP flew on 12 October 1982 and entered service on 1 May 1986. This variant could carry either a single missile or a reconnaissance pod on the centerline. When the Mirage IVP entered service with EB 1/91 and EB 2/91 (six bombers per squadron) all other Mirage IVA squadrons were disbanded. The aircraft were conserved and stored at Bordeaux Mérignac where they were demolished in 1997.

ES 1/91 Gascogne's surviving Mirage IVPs were retired in 2005 and are conserved and stored at the Centre d'Instruction Forces Aériennes Stratégiques (CIFAS) at Bordeaux Mérignac. They were scheduled to be immediately replaced by Mirage 2000N aircraft fitted with the new PRNG (Pod de Reconnaissance Nouvelle Génération, New Generation Reconnaissance Pod) system with digital camera equipment. However, the reconnaissance-configured 2000Ns will not be ready until 2007, so the Armée de l'Air's Mirage F1CRs are carrying out all aerial reconnaissance missions in the meantime.[dated info]

Note, however, that 16 Mirage IV airframes are visible via Google Earth at the Châteaudun Air Base (photo date 2007).

The Mirage IV had been popular with its crews, which find it enjoyable to fly despite its antiquated systems and generally uncomfortable cockpit, and it requires surprisingly little maintenance considering its age and complexity.[citation needed] 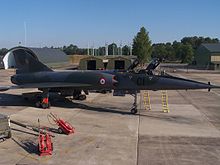