The idea for a nuclear-powered submarine was first proposed by the Naval Research Laboratory's Ross Gunn[4] in 1939.

The United States launched the USS Nautilus, the first nuclear submarine, in 1954.[5] Nautilus could remain underwater for up to four months without resurfacing.

Construction of the Nautilus was made possible by the successful development of a nuclear propulsion plant by a group of scientists and engineers at the Naval Reactors Branch of the Atomic Energy Commission. In July 1951, the U.S. Congress authorized construction of the world's first nuclear-powered submarine, under the leadership of Captain Hyman G. Rickover, USN.[6]

The Westinghouse Corporation was assigned to build its reactor. After the submarine was completed, Mamie Eisenhower broke the traditional bottle of champagne on Nautilus' bow. On January 17, 1955, it began its sea trials after leaving its dock in Groton, Connecticut. The submarine was 320 feet long, and cost about $55 million.

The Soviet Union soon followed the United States in developing nuclear-powered submarines in the 1950s. Stimulated by the U.S. development of the Nautilus, Soviet work on nuclear propulsion reactors began in the early 1950s at the Institute of Physics and Power Engineering, in Obninsk, under Anatoliy P. Alexandrov, later to become head of the Kurchatov Institute. In 1956, the first Soviet propulsion reactor designed by his team began operational testing. Meanwhile, a design team under Vladimir N. Peregudov worked on the vessel that would house the reactor.

After overcoming many obstacles, including steam generation problems, radiation leaks, and other difficulties, the first nuclear submarine based on these combined efforts entered service in the Soviet Navy in 1958.[7] 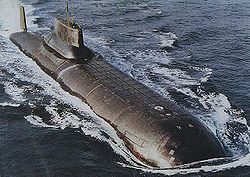 The VMF Typhoon class submarine, is nuclear powered and the world's largest-displacement submarine.[8]

At the height of the Cold War, approximately five to ten nuclear submarines were being commissioned from each of the four Soviet submarine yards (Sevmash in Severodvinsk, Admiralteyskiye Verfi in St. Petersburg, Krasnoye Sormovo in Nizhny Novgorod, and Amurskiy Zavod in Komsomolsk-on-Amur). From the late 1950s through the end of 1997, the Soviet Union, and later Russia, built a total of 245 nuclear submarines, more than all other nations combined.[9]

In the United Kingdom, all former and current nuclear submarines for the Royal Navy (with the exception of three: HMS Conqueror, HMS Renown and HMS Revenge) have been constructed in Barrow-in-Furness (at BAE Systems Submarine Solutions or its predecessor VSEL) where construction of nuclear submarines continues. Conqueror is[update] the only nuclear-powered submarine ever to have engaged an enemy ship with torpedoes, sinking the cruiser ARA General Belgrano with two Mark 8 torpedoes during the 1982 Falklands War.[note 1] 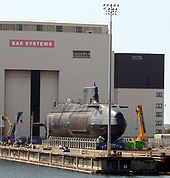 The main difference between conventional submarines and nuclear submarines is the power generation system. Nuclear submarines employ nuclear reactors for this task. They either generate electricity that powers electric motors connected to the propeller shaft or rely on the reactor heat to produce steam that drives steam turbines (cf. nuclear marine propulsion). Reactors used in submarines typically use highly enriched fuel (often greater than 20%) to enable them to deliver a large amount of power from a smaller reactor.

The nuclear reactor also supplies power to the submarine's other subsystems, such as for maintenance of air quality, fresh water production by distilling salt water from the ocean, temperature regulation, etc. All naval nuclear reactors currently in use are operated with diesel generators as a backup power system. These engines are able to provide emergency electrical power for reactor decay heat removal as well as enough electric power to supply an emergency propulsion mechanism. Submarines may carry nuclear fuel for up to 30 years of operation. The only resource that limits the time underwater is the food supply for the crew and maintenance of the vessel.

The stealth weakness of nuclear submarines is the need to cool the reactor even when the submarine is not moving; about 70% of the reactor output heat is coupled into the sea water. This leaves a "thermal wake", a plume of warm water of lower density which ascends to the sea surface and creates a "thermal scar" observable by thermal imaging systems, e.g. FLIR.[14]

Royal Navy of the United Kingdom

People's Liberation Army Navy of the People's Republic of China