Nostalgia, originally released in Japan as Nostalgio no Kaze (ノスタルジオの風, Nosutarujio no Kaze?, lit. "Wind of Nostalgio"), is a role-playing video game developed by Red Entertainment and Matrix Software for the Nintendo DS handheld system. Initially released in November 2008 for Japanese audiences by Tecmo, an English version of the game was officially announced for North America by Ignition Entertainment for an October 2009 release. The game's development was headed by producer Keisuke Kikuchi, with programming and three-dimensional graphics by Matrix Software, who had previously developed Square Enix's Nintendo DS versions of Final Fantasy III and Final Fantasy IV.

Taking place in an alternate reality steampunk version of the 19th century, the game follows Eddie, a London boy and son of a great adventurer as he and his friends travel the world in an airship in search of his missing father. The game features turn-based combat and aerial battles between the player's customizable airship, the Maverick, and enemy airships. The player's party, consisting of Eddie, the street urchin Pad, a witch named Melody and the mysterious Fiona were shown in early trailers to be traveling to such places as New York City, Cairo, Tokyo, Northern Europe and South America.

Nostalgia is a traditional console role-playing game featuring three-dimensional characters and environments. Players control a young London boy named Eddie and his compatriots as they travel across an alternate history 19th-century Earth on a high-powered zeppelin, visiting various locales and raiding ruins in order to uncover the truth about an ancient civilization, as well as find Eddie's lost father. In order to advance the story, players must visit towns and interact with non-player characters to obtains clues on their next destination, as well as traverse dangerous dungeons and environments in order to find hidden treasures. Taking advantage of the Nintendo DS's dual screens, gameplay is featured on one screen while a map of the player's current location is present on the other, which fills as they travel through new areas. While traveling through the game, the player will randomly encounter enemies as they move through dangerous areas, which must be defeated in battle.

Battles in Nostalgia use a turn-based combat system where both characters and enemies acting in an order relative to their "speed" statistic. A Combat Order bar is present in battles that shows which of the player's party members or enemies will act next, with the player selecting a character's command just before their turn. In any given turn, a player may choose to attack an enemy, defend, use an item for beneficial effects, or use special skills unique to each character. In addition to ground battles, a player may also encounter enemies while in their airship, leading to a ship-to-ship combat sequence with unique commands. Players must defeat all of their enemies by attacking them until their hit points are extinguished, which grants each character experience points that go towards gaining levels, thus making them stronger and giving them access to more abilities. The player's party is judged at the end of each battle with a letter grade based on their actions in combat, and is determined by how quickly and flawlessly they have defeated their enemies and may give additional rewards. 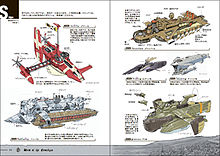 Nostalgia was first announced in a July 2008 issue of Japanese Famitsu magazine, where it was revealed that both Matrix Software and Red Entertainment would be teaming with Tecmo to bring the game to players the following November.[3] The game was produced by Tecmo's Keisuke Kikuchi, best known for his work on the company's Fatal Frame series,[4] whose goal was to inject traditional role-playing elements with simple gameplay, aspiring to "make a product that everyone could play.[5] Project director Naoki Morita of Red Entertainment envisioned the game's historical setting as an alternate 19th century Earth, which was wholly supported by Kikuchi who remarked that "I knew this game had such potential when I saw Mr. Morita's project book - It is an adventure game set in another Earth, offering an enjoyable story that involves various cultures in many diverse locations."[5] Morita originally wanted to produce an alternate history-style role-playing game as far back as 1996, but became sidetracked due to the runaway success of his Sakura Taisen series on the Sega Saturn and shelved the project until work began on the Nintendo DS.[6] Despite the large delay in production, Morita remained confident of his original vision, declaring that "I was confident that no matter how long it took, our designs for [Nostalgia] wouldn't lose their luster."[6] The staff of Matrix Software were largely responsible for the game's programming, and had previously worked with Square Enix to create the Nintendo DS version of Final Fantasy III and Final Fantasy IV.[4] The music for Nostalgia was composed by Shinichiro Sato and Rei Kondo, who was credited alongside his musical unit "T's Music".[7] Tecmo released a special promotional album featuring ten songs from the game to players who pre-ordered the title in Japan, along with an artbook that included design sketches and official artwork.[1]

In December 2008, North American publisher Xseed Games announced that the game was already claimed by another company to be released in the English under the title Nostalgia.[8] The following April, Ignition Entertainment officially announced that they had secured the publishing rights to the title and would be bringing it to North America in September.[2] Shane Bettenhausen, the company's Director of New Business Development, stated that he was "deeply honored" to be given the opportunity to release the game in English, and felt the game would have a place in the current western game market as a unique and original title, stating that "amid a sea of remakes and rehashes, this endearing adventure blazes its own unique path".[5]

Nostalgia received mixed reviews, currently holding a 72/100 score on Metacritic, aggregated from 36 reviews.[9] The game received a 30 out of 40 score from Japanese magazine Weekly Famitsu.[10]

The game had a modest sales start during its original release in Japan, selling 7,930 copies in its first week.[11]