Naval warfare in the Winter War

Naval warfare in the Winter War

The Naval warfare in the Winter War was the naval part of the Winter War between Finland and the Soviet Union from 30 November 1939 to 13 March 1940. Overall, the level of naval activity was low. However, Finland had coastal artillery batteries which took part of battles along its coast. 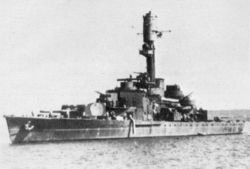 Naval activity during the Winter War was low. The Baltic Sea began to freeze over by the end of December, which made the movement of warships very difficult; by mid-winter, only ice-breakers and submarines could still move. The other reason for low naval activity was the nature of Soviet Navy forces in the area. The Baltic Fleet was a provincial coastal defence force which did not have the training, logistical structure, or landing craft to undertake large-scale operations. Furthermore, the Soviet Navy was technologically inferior to the British Royal Navy and the German Kriegsmarine.[1] Still, the Baltic Fleet was strong; it had two battleships, one heavy cruiser, almost 20 destroyers, 50 motor torpedo boats, 52 submarines and other vessels. The Soviets used naval bases in Paldiski, Tallinn and Liepāja in Estonia and Latvia for their attacks.[2]

The Finnish Navy was a coast defense force with two coastal defence ships, five submarines, four gunboats, seven motor torpedo boats, one minelayer and six minesweepers. The two coastal defence ships, Ilmarinen and Väinämöinen, were moved to the harbour in Turku where they were used to stiffen the air-defences. Their anti-aircraft guns knocked down one or two planes over the city, and ships remained there for the rest of the war.[1] Beside the costal defense, the Finnish Navy also protected Åland islands and merchant vessels in the Baltic sea — only a minor part of the fleet could engage in offensive military action.[2]

Furthemore, the Soviet aircraft bombed Finnish vessels, harbours and dropped mines to seaways. Still, the Finnish casualties were relatively low as they lost 26 merchant vessels, where only four were lost inside the Finnish territorial waters.[2]

In addition to its navy, Finland had its coastal artillery batteries defending important harbours and naval bases along its coast. Most batteries were leftovers from the Russian period, the 152 mm (6.0 in) gun being the most numerous, but Finland had modernized its old guns and installed a number of new batteries, the largest a 305 mm (12.0 in) gun battery originally intended to block the Gulf of Finland to Soviet ships with the help of batteries on the Estonian side.

The first naval battle took place near the island of Russarö, five kilometers south of Hanko. On 1 December 1939, there were fair weather conditions and visibility was excellent. The Finns spotted the Soviet cruiser Kirov and two destroyers. After the convoy was at a range of 24 km (13 nmi; 15 mi), the Finns opened fire with 234 mm coastal guns. After five short minutes firing by four coastal guns, the cruiser was damaged by near misses and retreated. The destroyers remained undamaged and Kirov was repaired in the naval base, but it lost 17 men and about 30 wounded. The Soviets knew the locations of the Finnish coastal batteries, but it became surprise that a fire range was much longer than expected. The coastal artillery was old-fashioned, but the Finns managed to modernize and improve it.[3]

Finnish coastal forts in near the Karelian Isthmus saw most action. In addition to the support of the land troops, Soviet naval forces made repeated attacks against the forts during the December 1939. Forts were repeatedly shelled by Soviet battleships (Marat and Oktyabrskaya Revoluciya) as well as by Soviet destroyers.

The coastal artillery had its greatest effect upon the land war. Batteries near the front were in well-protected fixed positions, with a higher rate of fire and greater accuracy than mobile artillery. Land batteries near the coast helped steady the defence of the Karelian Isthmus in conjunction with army artillery. In March, as the Soviets had broken through the front, all reserves were thrown into the fighting near Viborg. The Soviets tried to cross the ice of the Gulf of Viipuri and come up behind the city, but the Finnish coastal artillery fired their heaviest guns, breaking the ice under the Soviets and preventing a clean breakthrough.

The Soviet Union declared blockade on the Finnish coast and guarded this blockade with naval aviation and submarines. Initially, Soviet submarines followed prize rules but as this type of operations did not yield any results Soviet Union declared 41 ft 6 in (12.65 m)20 miles zone near the Finnish coast as exclusion zone and warned neutral ships to stay away from it. Submarine campaign was not particularly successful and was cut short by the harsh winter. During the Winter War the Soviet submarines sunk total of five ships, one Estonian (Kassari), two German (Reinbeck and Bolheim), one Swedish (Fenris), and one Finnish (Wilpas) merchant ship. Four other Finnish freighters were lost when Soviet Air Force bombed the Finnish ports. One Finnish escort (Aura II) was lost — the only loss of the Finnish Navy in the Winter War in the Baltic Sea — while escorting convoys in Finnish waters, when during an anti-submarine operation, a depth charge thrower misfired and depth charge exploded while still onboard sinking the ship. Soviet Baltic Fleet lost submarine S-2 during the blockade. After the ice formation prevented submarine operations, the Soviet blockade was based solely on the aircraft patrols and the mines dropped from the aircraft.