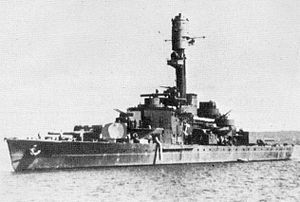 The Finnish coastal defence ship Väinämöinen, one of the last examples of the type.

Coastal defence ships (sometimes called coastal battleships or coast defence ships) were warships built for the purpose of coastal defence, mostly during the period from 1860 to 1920. They were small, often cruiser-sized warships that sacrificed speed and range for armour and armament. They were usually attractive to nations that either could not afford full-sized battleships or that could be satisfied by specially designed shallow-draft vessels capable of littoral operations close to their own shores. The Nordic countries and Thailand found them particularly appropriate for their island-dotted coastal waters. Some vessels had limited blue-water capabilities; others operated in rivers.

The coastal defence ships differed from earlier monitors by having a higher freeboard, usually higher speed, sometimes casemated guns (monitors' guns were almost always in turrets) and usually possessed secondary armament. They varied in size from around 1,500 tons to 8,000 tons.

Their construction and appearance was often that of miniaturized pre-dreadnought battleships. As such, they carried heavier armour than cruisers or gunboats of equivalent size, carried a main armament of two or four heavy and several lighter guns in turrets or casements, and could steam at a higher speed than most monitors. In service they were mainly used as movable coastal artillery rather than instruments of sea control or fleet engagements like the battleships operated by blue-water navies. Few of these ships saw combat in the First World War, though some did in Second World War. The last were scrapped in the 1970s.

Navies with coastal defence ships as their main capital ships included Argentina, Belgium, Brazil, Ecuador, Finland, Greece, the Netherlands, Norway, Portugal, Sweden, Thailand and the British colonies of India and Victoria. Germany and Russia also built them, with Russia using three at the Battle of Tsushima in 1905.

Apart from specially built coastal defence ships, some navies used obsolescent pre-dreadnought battleships in this role. The Royal Navy deployed four Majestic class battleships as guardships in the Humber at the start of the First World War. Similarly, the U.S. Navy redesignated the Indiana and Iowa classes as "Coast Defense Battleships" in 1919. Such ships tended to be near the end of their service lives and while considered generally no longer fit for front line service, were still powerful enough for defensive duties in reserve.

This type of vessel has always been categorized differently by different countries, due to treaties, differences in judgments related to design or intended roles, and also national pride. In the United Kingdom the Scandinavian ships were known as "coast defence ships". From the 1920s onward Germany referred to the Scandinavian ships as "coastal armoured ships" (Küstenpanzerschiff), in contrast to their own Deutschland class of larger seagoing "armoured ships" (Panzerschiff), which were later rerated as "heavy cruisers" (Schwere Kreuzer). The Danes referred to their ships as both Kystforsvarsskib ("coast defence ships") and Panserskib ("armoured ships"). In Norway they were referred to as Panserskip ("armoured ships"). The Dutch called their ships Kruiser ("cruisers"), Pantserschip ("armoured ships") or Slagschip ("battleships"). The Swedish term for these ships was Pansarskepp ("armored ship").

As an example of the profusion of terms and classifications which often contradicted each other, the 1938 edition of Jane's Fighting Ships lists the Swedish Pansarskepps of the Sverige class as battleships.

The Swedish Pansarskepps were an outgrowth of the earlier Swedish adoption of the monitor and were used for similar duties.

The Pansarskepp, with the notable exception of the Sverige class, were relatively small vessels with limited speed, shallow draft, and very heavy guns relative to the displacement. They were designed for close in-shore work in the littoral zone of Scandinavia, and other countries with shallow coastal waters. The aim was to outgun any ocean-going warship of the same draft by a significant margin, making it a very dangerous opponent for a cruiser, and deadly to anything smaller. The limitations in speed and seaworthiness were a trade-off for the heavy armament carried. Vessels similar to the Swedish Pansarskepp were also built and operated by Denmark, Norway, and Finland, all of which had similar naval requirements.

The Sverige-class ships differed in several way´s from the classical coastal defence ship; at first by heavier armament as well as better speed and armor, but still small enough to operate and hide in the archipelagos and shallow waters . But the main difference was to be noted in their tactical doctrine and operations. Unlike other coastal defence ships the "Sverige-class" formed the core of a traditional open sea battle group (Kustflottan), operating with cruisers, destroyers, torpedo boats and air reconnaissance like traditional battleship tactics of the time. This “mini-battle group” had no intention to challenge the superpowers in blue sea battles but to operate as defensive shield to aggression challenging Swedish interests and territory. Based on the doctrine that you need a battle group, to challenge a battle groups this force intended to form a problematic obstacle in the confined and shallow Baltic and Kattegat theatre where traditional large warships would be limited to very predictable moving patterns exposing them to submarines, fast torpedo crafts and minefields. It has been suggested that the Sverige class ships were one reason why Germany did not invade Sweden during World War II.This speculation appeared in Warship Magazine[when?] - the author[who?] was writing an article on the Sverige class. This could partly said to be confirmed in the post war publication of German tactical orders, and when tactical scenarios regarding attacking Sweden was published. The problems of maintaining an army in Sweden without sea superiority was underlined, and lack of available suitable units to face the swedish navy was pointed out (“Stations for battle”, Insulander/Olsson, 2001) Summarizing the question of effectiveness for the “Sverige-class” it likely that despite a good armament they would have been to small, to cramped, to slow and without enough range to perform against any traditional battlecruiser or battleship in blue water scenario. However, if used rightly in their home waters and in a defensive situation they would probably have presented a major challenge for any aggressor.

The Dutch used their armoured ships mainly to defend their interests overseas, in particular in their colonial possessions (Netherlands Antilles) in the West Indies and the East Indies. For this reason the ships had to be capable of long-range cruising, providing artillery support during amphibious operations, and carrying the troops and equipment needed in these operations. At the same time the ships had to be well enough armed and armoured to face contemporary armoured cruisers of the Imperial Japanese Navy (the likely enemy). As such they were expected to act as mini-battleships rather than as strictly coastal defence vessels.

The last Dutch pantserschip HNLMS De Zeven Provinciën, was built in 1909 more or less as a stop-gap measure while the Dutch Admiralty and government contemplated an ambitious fleet plan comprising a number of dreadnought battleships. This ambition was never realized due to the outbreak of the First World War. The Second World War put an end to a similar project to obtain fast capital ships in the late 1930s with German assistance.

Prior to the Second World War, the Dutch had relegated all the surviving pantserschips to secondary duties. The Axis powers converted several to serve as floating anti-aircraft batteries and subsequently utilized some as block ships.