The 1939 New South Wales Rugby Football League premiership was the thirty-second season of Sydney's top-level rugby league football club competition, Australia's first. Eight teams from across the city contested the premiership during the season, which lasted from April until September and culminated in Balmain's victory over South Sydney in the final.[1]

This was to be the St. George club's final season at Earl Park, Arncliffe, the following season moving back to Hurstville Oval. 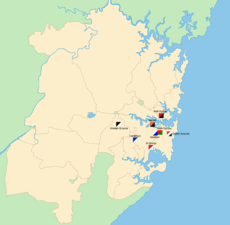 The geographical locations of the teams that contested the 1939 premiership across Sydney.

The decider was played on the weekend when the world's future altered dramatically with the invasion of Poland by Germany leading to England, Australia and the world going to war.

The match was played at the Sydney Cricket Ground and refereed by George Bishop in front of 26,972. The game was tight in the first half with the Tiger's scoring one try to lead 7-2 at the break.

In the second-half Balmain ran away with it, scoring six further tries to South Sydney's nil for a crushing seventh premiership title and the Tigers' first back-to-back season victories since 1924. 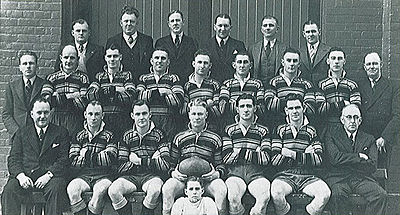