The 1949 New South Wales Rugby Football League premiership was the forty-second season of Sydney's top-level professional rugby league football club competition, Australia's first. Ten teams from across the city contested the premiership during the season which culminated in a grand final between St. George and South Sydney.[2]

The 1949 season was also the last in the NSWRFL for future Australian Rugby League Hall of Fame inductee, Vic Hey.

Minor premier South Sydney's loss to St. George in the finals meant that a grand final would be necessary.[3]

In a brutal encounter, St George ran in five tries and overcame minor premiers South Sydney 19-12[4] to claim their second premiership in front of 56,532 people, the second biggest crowd of all time to witness Sydney club match.[5]

Souths opened the scoring, with a converted try to Graves after 21 minutes. However the Dragons were led masterfully by their captain, Kangaroos five-eighth, Norman 'Johnny' Hawke. Controlling all aspects of the match, Hawke took the game away from Souths who only got back into the contest when he was forced from the field with injury. Also injured was Saints forward George Jardine who played the match with a broken wrist. 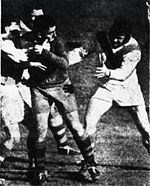 South Sydney's Denis Donoghue clings to the ball as he's hemmed in by the St. George defence.

St. George led 11 - 5 at half time. Hawke returned to the field after treatment and was later dubbed 'Man of the Match' and 'the Player's Player'. The Dragons' wingers, season's top try scorer Ron Roberts (25 tries) and newcomer Noel Pidding scored two tries each.

Each of the grand final winning players received a record bonus of £300 each.