The 1919 New South Wales Rugby Football League premiership was twelfth season of Sydney's professional rugby league football club competition, Australia's first. Eight teams from across the city contested during the season, with Balmain finishing on top of the ladder to claim the premiership.[1]

Both Balmain and Eastern Suburbs dominated the 14-round season, dropping just two and three games respectively. They were undefeated after eight rounds but a mid-year Australian tour to New Zealand saw Balmain miss their representative stars and their lead was lost to Eastern Suburbs late in the season.

With three rounds to go, Balmain led Eastern Suburbs by one point on the ladder but relinquished this lead by losing their round 12 match against Glebe as Eastern Suburbs beat winless Annandale 28–0. This meant Eastern Suburbs now led by one point with two rounds to play. However, they lost the very next round 15–12 to South Sydney, who had won just four of their twelve previous matches. Meanwhile, Balmain managed to beat Newtown 18–5, giving them the one point advantage heading into the final round.

The City Cup was won by Wests for the second consecutive season.

The teams remained unchanged from the 1918 season 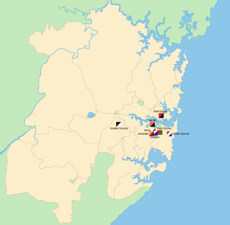 The geographical locations of the teams that contested the 1919 premiership across Sydney.