The 1937 New South Wales Rugby Football League premiership was the thirtieth season of the Sydney, New South Wales-based top-grade rugby league football club competition, Australia's first. Nine teams from across the city contested the premiership during the season, which lasted from April until June, with Eastern Suburbs being crowned champions.[1]

The season only lasted eight rounds in 1937 due to the Kangaroo tour, and used a 'first past the post' system to determine the premiers. There were no Finals. The second half of the season was taken up with a City Cup competition.

Eastern Suburbs won their 7th Premiership going through the season undefeated - a feat achieved by teams in only five other seasons before or since. At the end of the season the University club withdrew voluntarily from the premiership, having won only two matches in four years. 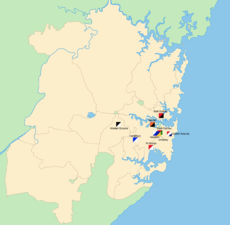 The geographical locations of the teams that contested the 1937 premiership across Sydney.