Some minerals, such as high-grade iron ore, phosphate, mercury, and zinc, have been exported since the early 1970s. The state mining and prospecting corporation, the National Company for Mineral Research and Exploration (Société Nationale de Recherches et d'Exploitations Minières), was established in 1967. As a result of the government's decentralization policy, the company was restructured in 1983 into separate production and distribution entities. The most important of these were an iron ore and phosphate company known as Ferphos, which had three production units and a port complex at Annaba, and another company called Erem that specialized in conducting mineral research at Boumerdas, on the Mediterranean Sea, and Tamanrasset in the south.[2]

In 2000, the government proposed allowing foreign investors to develop mineral deposits held by the national mining companies. The national geologic and mineral research office has identified many mineral deposits. However, they were located in remote areas that lacked infrastructure or government funding for development. With Algeria’s proximity to Europe, its major minerals customer[citation needed], the country’s base and precious metals are of interest to foreign investors. Guerrilla activity, though, remains a significant deterrent.

The mineral industry is managed primarily by the Ministère de l’Énergie et des Mines (Ministry of Energy and Mines) and subsidiary organizations, such as the Agence Nationale du Patrimoine Minier (ANPM) (National Agency for Mining Endowment). Processed mineral commodities, such as cement, fertilizers, and steel, are under the jurisdiction of the Ministère de l’Industrie et de la Restructuration (Ministry of Industry and Restructuring).[1]

Structure of the mineral industry

In 2006, about 300 exploration permits were in effect. Notable exploration and development and redevelopment contracts under negotiation included those with subsidiaries of the Mineral Resources Management Bureau of Henan Province, China for the Boukais copper prospect, the Boukhedma-Aïn Sedjra-Kef Semmah lead zinc prospects, the El Abed zinc prospect, the Guettara manganese prospect, and the Issefane gold prospect. Western Mediterranean Zinc s.p.a., which was a joint venture of Terramin Australia Ltd. (65% interest) and ENOF (35% interest), acquired the rights to explore the Oued Amizour zinc project.[1]

ENOR produced 38,914 metric tons (t) of ore with an average grade of 9.57 grams per metric ton gold from the Tirek Mine in 2006, which was significantly less than the 65,718 t of ore that the company mined in 2005. The decline was attributed to the delayed delivery of equipment. Development of the Amesmessa Mine continued; production was expected to begin in 2007.[1]

Assays of samples from a 5-hole drilling program at the Tan Chaffao deposit by Tan Chaffao Mining Co. S.A.R.L., which was a joint venture of Maghreb Minerals PLC of the United Kingdom (85% interest) and Gold and Industrial Minerals [GOLDIM] [which was a subsidiary of the Government-owned Office National de la Recherche Géologique et Minière (15%)] indicated less than expected mineralization. At yearend, the joint venture was reevaluating whether to continue exploration of the isolated Tan Chaffao deposit, which is located about 250 kilometers (km) northwest of Tamanrasset.[1]

In late 2006, Western Mediterranean Zinc began a drilling program on the Tala Hamza deposit of the Oued Amizour zinc project. Tala Hamza was located about 12 km southwest of the Port of Bejaia.[1]

In 2006, the testing of the Helison Production s.p.a. plant located at the GL1K liquefied natural gas (LNG) facility in Skikda resulted in the plant’s initial liquid helium production. Designed with a nominal production capacity of 16 million cubic meters per year of liquid helium, the plant capacity would be restricted to 8 million cubic meters per year because of an explosion and fire that destroyed three LNG trains at Skikda in 2004. The construction of a 4.5-million-metric-ton-per-year-capacity LNG train at the GL1K facility (to replace the destroyed LNG trains) was expected to begin in 2007.[1]

Existing and expected local and European high demand for oil and gas has resulted in the construction and planning of a number of pipelines in Algeria: [4] 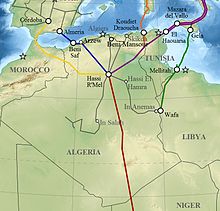 Owing to its hydrocarbon resources and associated infrastructure and its location close to Europe (which was the major market for its minerals), Algeria’s hydrocarbon sector is expected to continue to attract foreign direct investment. Continued high international commodity prices were expected to encourage continued domestic and international interest in the Government’s program to partially divest its ownership interest in nonfuel mineral operations.[1]

Successful mineral fuel and nonfuel mineral exploration could result in increased mineral commodity development opportunities. The Government proposes to increase oil production (subject to production quotas of the Organization of the Petroleum Exporting Countries) and to increase natural gas exports by 2010.[1]