Mid-Atlantic Christian University or MACU (formerly Roanoke Bible College) is a private Christian college located in Elizabeth City, North Carolina, United States. It is supported by Christian churches and churches of Christ, which is part of the Restoration Movement. MACU is a four-year, co-educational institution and is authorized to award Bachelor's and Associate's degrees. 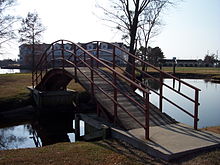 Mid-Atlantic Christian University was founded as Roanoke Bible College in 1948 by George W. BonDurant and his wife, Sarah, to train preachers for churches in eastern North Carolina and the Tidewater region of Virginia. The BonDurants had previously founded Atlanta Christian College in 1937 and George BonDurant served as its first President until 1947, when he left over a dispute with the trustees. George BonDurant then found employment as an evangelist of the Roanoke District Churches of Christ in eastern North Carolina in 1947.

The BonDurants founded MACU due to the extreme lack of preachers in the area at the time.[1] Classes began in 1948 with 12 full-time students.[2] The first group of transfer students graduated in 1950 and the first class to complete all four years at MACU graduated in 1952.

MACU absorbed the remaining funds, library holdings, and equipment from Eastern Christian College when it closed in 2005.[5][6]

MACU officially changed its name to Mid-Atlantic Christian University in the summer of 2009.[7] Enrollment at MACU reached 178 students in the fall semester of 2010.[8]

On October 3, 2010, sophomore Jonathan Schipper was shot to death in his room in the Pearl A. Presley Hall, bringing MACU national news attention. The school normally does not allow guns on campus.[8] This is the only violent crime ever reported on MACU's campus.[9]

Current enrollment is 190 with approximately 15 faculty members. MACU has agreements with Elizabeth City State University and College of the Albemarle allowing dual enrollment. The school has a Student-faculty ratio of 14-1, an average class size of 15, and 80% of faculty have a Ph.D. or equivalent.[10]

In addition to the previously mentioned sports, MACU has had in the past, and hopes to have in the future, the following varsity sports: women's basketball, co-ed soccer, and men's soccer. MACU also has intramural sports that vary by semester. They have included but are not limited to the following: flag football, basketball, volleyball, kick ball, wiffle ball, and many more.

There are also tournaments played among the students in the lobbies utilizing the pool table, ping pong table and foosball table. MACU is an active campus if you plug yourself in and be a part of what's happening! 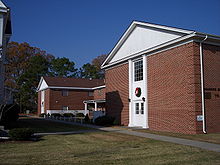 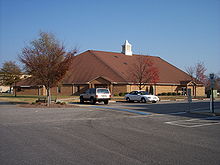 The MACU campus is located on the Pasquotank River, less than a mile from downtown Elizabeth City, North Carolina. East and West campus are divided by North Poindexter Street.[11]

Every year during the fall semester, the seniors organize a Sneak Day. They wake up the rest of the students shortly after 4:00 AM and take them to a secret location off campus for a day of fun and relaxation. Faculty and staff are unaware of exact date of Sneak Day until they find no one attending morning classes.[12]

MACU's annual Alumni Rally & Homecoming has been held in Elizabeth City every year since 1949.[13] It normally takes place in March and has been on MACU's campus since 1999. Typical rallies include an alumni basketball game, praise and worship sessions, and a variety of speakers.