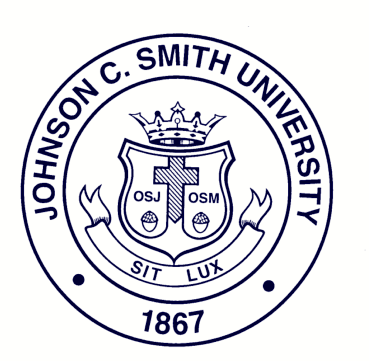 Johnson C. Smith University (JCSU) is a private, co-ed, four-year liberal arts institution of higher learning located in the heart of . It is affiliated with the Presbyterian Church. JCSU is also a historically black college. JCSU offers an assortment of academic programs, aimed at ensuring that its graduates are prepared for success in the workforce. JCSU is accredited by the Southern Association of Colleges and Schools (SACS), National Council for the Accreditation of Teacher Education (NCATE), Association of Collegiate Business Schools and Programs (ACBSP), and Council on Social Work Accreditation (CSWE). The school awards , , and degrees to its graduates. The school also presents many internship oppourtunities for its students.

thumb|left|Biddle_Hall_(1883),_is_one_of_the_oldest_buildings_at_JCSU_and_a_North_Carolina_landmark._In_2002-2005,_Biddle_under_went_renovations_making_it_the_center_for_all_administration_offices._[ [http://www.jcsu.edu/future/heritage.htm Johnson C. SMITH University - History ] ] ] Johnson C. Smith University was established on April 7, 1867 as the Biddle Memorial Institute at a meeting of the Catawba Presbytery in the old Charlotte Presbyterian Church. Mrs. Mary D. Biddle, a churchwoman, donated $1,400 to the school. In appreciation of this first contribution, friends requested Mrs. Biddle to name the newly established school after her late husband, Major Henry Biddle. Two ministers, Rev. Samuel C. Alexander and the Rev. Willis L. Miller, saw the need for a school in the south and after the birth of the school they were elected as some of the first teachers. Its coordinate women's school was "Scotia Seminary" (now ). [ [http://cdl.library.cornell.edu/cgi-bin/moa/pageviewer?frames=1&coll=moa&view=50&root=%2Fmoa%2Famis%2Famis0033%2F&tif=00358.TIF Part of a Tour Through the Carolinas] ]

In 1876, the charter was changed by the Legislature of the State of North Carolina and the name became Biddle University, under which name the institution operated until 1923.

From 1921 to 1922, Jane Berry Smith donated funds to build a theological dormitory, a science hall, a teachers' cottage and a memorial gate. She also provided an endowment for the institution in memory of her late husband, Johnson C. Smith. Up until her death she donated funds for five more buildings and a campus church. In recognition of these generous benefactions, the Board of Trustees voted to change the name of the institution to Johnson C. Smith University. The charter of the school, accordingly, was amended on March 1, 1923, by the Legislature of the State of North Carolina.

JCSU joined the in 1944 as a founding member. This fund was organized primarily to help church-related schools of higher learning to revamp their training programs, to expand their plants, to promote faculty growth, and to create new areas of service. [cite web|url=http://www.uncf.org|title=United Negro College Fund official website]

In Fall 2000, JCSU launched the IBM Laptop Initiative becoming one of few colleges in the country and the first historically black college to provide an laptop computer to every student. Known as " U", JCSU gives students and their computers complete access to the campus-wide network and the Internet. Since 1994, the ratio of computers to students improved from 1:10 to 1:1.1. Fact|date=June 2008 With this new initiative and the commitment to integrate technology throughout the curriculum, JCSU gained national recognition.

Due to its location in a large urban area, there are many social and cultural activities for JCSU students and faculty to enjoy, including professional sporting events, theater/movies, concerts, art exhibits, bands, chorale, poetry readings, and dance, among others.

Student-athletes compete in intercollegiate and intramural athletics. Students can choose to be involved in various on-campus organizations, including fraternities, sororities, and intramural sports.

JCSU is a member of the (NCAA), Division II, and the (CIAA). Its intercollegiate sports programs include , , cross-country, , , , , , and . Its teams are nicknamed the Golden Bulls.

JCSU's on-campus stadium is called the .