The Dying Earth subgenre is a sub-category of science fiction or science fantasy which takes place in the far future at either the end of life on Earth or the End of Time, when the laws of the universe themselves fail. Themes of world-weariness, innocence (wounded or otherwise), idealism, entropy, (permanent) exhaustion/depletion of many or all resources (such as soil nutrients), and the hope of renewal tend to pre-dominate.

The apocalyptic sub-genre is nearly as old as literature itself. The Dying Earth genre differs in that it deals not with catastrophic destruction, but with entropic exhaustion of the Earth. The genre was prefigured by the works of the Romantic movement. Jean-Baptiste Cousin de Grainville's Le Dernier Homme (1805) narrates the tale of Omegarus, the Last Man on Earth. It is a bleak vision of the future when the Earth has become totally sterile. Lord Byron's poem "Darkness" (1816) shows Earth after the Sun has died.

Another early example is La Fin du Monde (The End of the World, aka Omega: the last days of the world), written by Camille Flammarion and published in France in 1893. The first half of the novel is dealing with a comet on a collision course with earth in the 25th century. The last half focuses on earth's future history, where civilization rise and fall, humans evolve and finally, its end as an old, dying and barren planet.
Another early and more famous science fiction work to utilize the familiar Dying Earth imagery was H. G. Wells' famous novella "The Time Machine" (1895). At the end of this work, the unnamed time traveller travels into the far future where there are only a few living things on a dying Earth. He then returns to his own time to relate his tale to a circle of contemporaries.

Two brooding works by William Hope Hodgson would elaborate on Wells' vision. The House on the Borderland (1908) takes place in a house besieged by unearthly forces. The narrator then travels (without explanation and perhaps psychically) into a distant future in which humanity has died and then even further, past the death of Earth. Hodgson's later The Night Land (1912) describes a time, millions of years in the future, when the Sun had gone dark. The last few millions of the human race are gathered together in a gigantic metal pyramid, the Last Redoubt (probably the first arcology in literature) under siege from unknown forces and Powers outside in the dark. 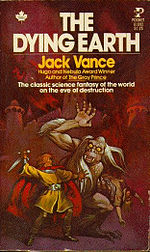 Cover of a paperback edition of Jack Vance's The Dying Earth

From the 1930s onwards, Clark Ashton Smith wrote a series of stories situated in Zothique, the last continent of Earth. Smith said in a letter to L. Sprague de Camp, dated November 3, 1953:

"Zothique, vaguely suggested by Theosophic theories about past and future continents, is the last inhabited continent of earth. The continents of our present cycle have sunken, perhaps several times. Some have remained submerged; others have re-risen, partially, and re-arranged themselves.

[...]The science and machinery of our present civilization have long been forgotten, together with our present religions. But many gods are worshipped; and sorcery and demonism prevail again as in ancient days. Oars and sails alone are used by mariners. There are no fire-arms—only the bows, arrows, swords, javelins, etc. of antiquity."

Although not technically set on a dying Earth, many of the sword and planet stories of the early twentieth century set on Mars, most notably Edgar Rice Burroughs' Barsoom series and works influenced by it, such as the Eric John Stark stories of Leigh Brackett and C.L. Moore's series focusing on Northwest Smith, shared similarities with the genre. In these stories, ancient and exotic Martian (or other) civilizations had undergone a decadent decline, enlivened by the presence of demonic adversaries from past ages. The fact that scientists had seriously speculated that Mars had once borne life, which had by the present almost or, perhaps entirely, died out, gave a special entropic kick to these escapist adventures.

Under the influence of Smith, Jack Vance wrote the short story collection The Dying Earth. The collection would have several sequels. These works gave the sub-genre its name.[1]