The Financial District of Boston, Massachusetts, United States is located in the downtown area near Government Center and Chinatown. 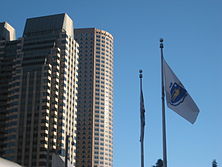 125 High Street, One International Place, and the Flag of Massachusetts in the Financial District near South Station

Dewey Square, One Financial Center, and the plaza and towers housing the Federal Reserve Bank of Boston are located near South Station, adjacent to and just south of the area defined above. Also part of the Financial District are 33 Arch Street, One Federal Street, the First National Bank Building building, and 101 Federal Street. The area contains many of Boston's highrise buildings in a fairly densely packed area, significantly more than the Back Bay which contains Boston's two tallest highrises, the Prudential Center and the John Hancock Tower. Many of the Financial District's highrises range in heights upwards of 500 feet and most climb above 40 stories.

Other proposals that would significantly change and enlarge the skyline of Boston inclue Trans National Place which would rise to 1,175 feet becoming one of the nation's tallests highrises. There have also been some other proposals such as the Congress Street Towers, and the Aquarium Garage Towers which woud both be upwards of 50 stories and at least 500 feet.