Brighton is a dissolved municipality and current neighborhood of Boston, Massachusetts, United States,[1] and is located in the northwest corner of the city. It is named after the town of Brighton in the English city of Brighton and Hove. For its first 160 years Brighton was part of Cambridge and was known as “Little Cambridge." Throughout much of its early history it was a rural town with a significant commercial center at its east end. Brighton separated from Cambridge in 1807 after a bridge dispute and was later annexed to Boston, in 1874.[2] It is now a large community jointly with the adjacent neighborhood of Allston. Its population is predominantly white and Asian, with smaller numbers of Latinos and African Americans.

Before the American Revolutionary War, Little Cambridge became a small, prosperous farming community with fewer than 300 residents. Its inhabitants included wealthy Boston merchants such as Benjamin Faneuil (after whom a street in Brighton is named).

A key event in the history of Allston-Brighton was the establishment in 1775 of a cattle market to supply the Continental Army. Jonathan Winship I and Jonathan Winship II established the market, and in the post-war period that followed, the Winships become the largest meat packers in Massachusetts. 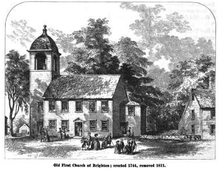 In 1820, the horticulture industry was introduced to the town. Over the next 20 years, Brighton blossomed as one of the most important gardening neighborhoods in the Boston area. The businessmen, however, did not neglect the cattle industry. In 1834, the Boston & Worcester Railroad was built, solidifying the community's hold on the cattle trade. By 1866, the town contained 41 slaughterhouses.

In October 1873, the Town of Brighton, in Middlesex County, voted to annex itself to the City of Boston in Suffolk County, and in January 1874 Brighton officially became a neighborhood of the City of Boston. Allston-Brighton’s population grew tremendously in the next half century, rising from 6,000 in 1875 to 47,000 by 1925.[4]

Brighton is accessible via the B line of Massachusetts Bay Transportation Authority's (MBTA) Green Line as well as its local bus routes (57 - Kenmore Square to Watertown Yard, 64 - Oak Square to Central Square (Cambridge) via Cambridge Street, 65 - Kenmore Square to Brighton Center via Longwood Medical District, 70 - Waltham to Central Square (Cambridge) via Western Avenue and 86 - Cleveland Circle to Harvard Square via Market Street) and inner-express bus routes (501 - Brighton Center to Financial District and 503 - Brighton Center to Copley Square). The C branch of the Green line terminates in Brighton, and the D branch of the Green line runs nearby, though not through Brighton.

While 47% of the population of Brighton drives alone to work, 36% uses mass transit, compared with 71% and 2% respectively for the United States as a whole.[5]

Brighton is a neighborhood of Boston that is connected to the rest of the city by the Allston neighborhood and is otherwise surrounded by Cambridge, Watertown, Newton, and Brookline. The Charles River separates Brighton from Cambridge and Watertown. According to the Census Bureau, Brighton, defined by zip code 02135, has a population of 43,887 and a land area of 2.78 square miles (7.2 km2).

Brighton is, for the most part, administered jointly with the adjacent neighborhood of Allston (zip code 02134). The two are often referred to together as "Allston-Brighton" (and by some as "Brighton-Allston"), and (also according to Census Bureau data) have a combined population of 65,276 and a land area of 4.12 square miles (10.7 km2).

Thirty-three percent of Brighton has graduated from a four-year college.[7]

The largest religious group (45%) is Catholic, with Protestants and other Christians making up the second-largest, at 10% of the population. The next largest religious identification is Judaism (4%), with Islam at 2%.[10]

Brighton is host to many public schools, including Winship Elementary School, Edison School, and Mary Lyon School. One of these is Brighton High School. Mount St. Joseph Academy is a private high school located within the boundaries of the locality. The EF International Language School, an English and college preparatory school for international students, is located on Lake Street.

Brighton is host to the Everest Institute, Saint John's Seminary and portions of Boston College and Harvard University. The area is also close to other colleges, including Boston University, and houses many of their students and faculty.

See also the List of colleges and universities in metropolitan Boston.