In 1917 McCord and Allen discovered melatonin itself.[6] Just over 40 years later, in 1958, Aaron B. Lerner and his colleagues isolated the substance N-acetyl-5-methoxytryptamine and named it melatonin.[1][6] High-affinity melatonin binding sites were pharmacologically characterized in the bovine brain in 1979. The first melatonergic receptor was cloned from melanophores of Xenopus laevis in the 1990s.[6] In 1994 the melatonin receptors were characterized and cloned in the human being.[7] There has been a constant growth in the field of melatonin and melatonin analogues since the 1980s.[8] In 2005 ramelteon (Rozerem®) was the first melatonin agonist to be approved in the United States (US), indicated for insomnia treatment in adults which is characterized as difficulty with falling asleep.[9] Melatonin in the form of the timed release Circadin® was approved in 2007 in Europe (EU) for use as a short-term treatment, in patients 55 years or older, for primary insomnia (poor quality of sleep).[10] Products containing melatonin are available as a dietary supplement in the United States[11] and Canada. In 2009 agomelatine (Valdoxan®, Melitor®, Thymanax®) was also approved in Europe and is indicated for the treatment of major depressive disorder in adults.[10] Tasimelteon completed the phase III clinical trial in the United States for primary insomnia in 2010.[8] The Food and Drug Administration (FDA) granted tasimelteon orphan drug designation status for blind individuals without light perception with non-24-hour sleep-wake disorder in January the same year.[12] TIK-301 (PD-6735, LY-156,735) has been in phase II clinical trial in the United States since 2002.[1] The FDA granted TIK-301 orphan drug designation in May 2004, to use as a treatment for circadian rhythm sleep disorder in blind individuals without light perception and individuals with tardive dyskinesia.[1] 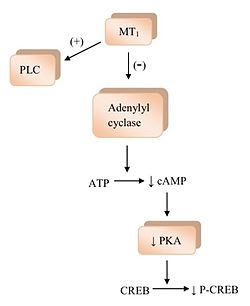 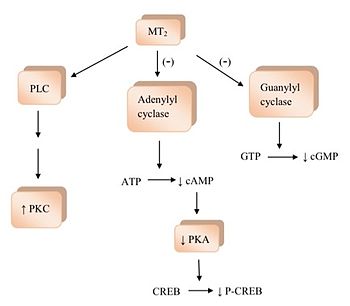 In humans there are two subtypes of melatonin receptors, MT1 and MT2. They are G protein-coupled receptors and are expressed in various tissues of the body, together or singly.[2] MT1 receptors are expressed in many regions of the central nervous system (CNS): suprachiasmatic nucleus of the hypothalamus (SNC), hippocampus, substantia nigra, cerebellum, central dopaminergic pathways, ventral tegmental area and nucleus accumbens.[2][5] MT1 is also expressed in the retina, ovary, testis, mammary gland, coronary circulation and aorta, gallbladder, liver, kidney, skin and the immune system. MT2 receptors are expressed mainly in the CNS, also in the lung, cardiac, coronary and aortic tissue, myometrium and granulosa cells, immune cells, duodenum and adipocytes.[2]

The binding of melatonin to melatonin receptors activates a few signaling pathways.[1] MT1 receptor activation inhibits the adenylyl cyclase and its inhibition causes a rippling effect of non activation; starting with decreasing formation of cyclic adenosine monophosphate (cAMP), and then progressing to less protein kinase A (PKA) activity, which in turn hinders the phosphorilation of cAMP responsive element-binding protein (CREB binding protein) into P-CREB.[4] MT1 receptors also activate phospholipase C (PLC), affect ion channels and regulate ion flux inside the cell.[1][2][4] The binding of melatonin to MT2 receptors inhibits adenylyl cyclase which decreases the formation of cAMP.[4] As well it hinders guanylyl cyclase and therefore the forming of cyclic guanosine monophosphate (cGMP). Binding to MT2 receptors probably affects PLC which increases protein kinase C (PKC) activity. Activation of the receptor can lead to ion flux inside the cell.[1][4]

When melatonin receptor agonists activate their receptors it causes numerous physiological processes.[2][4][5] MT1 and MT2 receptors may be a target for the treatment of circadian and non circadian sleep disorders because of their differences in pharmacology and function within the SCN. SCN is responsible for maintaining the 24 hour cycle which regulates many different body functions ranging from sleep to immune functions.[13] Melatonin receptors have been identified in the cardiovascular system. Number of animal studies point to a dual role of melatonin in the vasculature.[2] Activation of MT1 receptors mediates vasoconstriction and the activation of MT2 receptors mediates vasodilation. Melatonin is involved in regulating immune responses in both human and animals through activation of both MT1 and MT2 receptors.[2][4] MT1 and MT2 receptors are widespread in the eye and are involved in regulating aqueous humor secretion, which is important for glaucoma, and in phototransduction. This is not a complete list since many of the possible processes need further confirmation.[2]

Receptors and the structure of melatonin are known. Therefore researchers started to investigate modulations of the core structure to develop better agonists then melatonin; more potent, with better pharmacokinetics and longer half-life. TIK-301 (figure 4) is an agonist of the early classes. It is very similar to melatonin and has made it to clinical trials.[1] This led to further researches on the molecule, mainly substitution of the aromatic ring. Various modulations showed promising activity, specially the naphthalene ring which is present in agomelatine (figure 4).[1][6] Other ring systems have also showed melatonin agonist activity. Amongst them are indane which is present in ramelteon (figure 4) and the ring system of tasimelteon (figure 4).[1][3]

The general structure of melatonin is the indole ring with methoxy group in position 5 (5-methoxy group) and acylaminoethyl side-chain in position 3.[1] The two side-chains are important for binding to and activating the receptors.[3] The indole ring has been evaluated at all positions by the effect of substitutions as seen in figure 4.[1] Each position is further explained below:

2-iodomelatonin was synthesized in 1986 and its radioligand, 2-[125I]-melatonin, has been useful in finding cellular targets of melatonin. Though the melatonin receptor wasn’t characterized and cloned in the human being until 1994 it was possible to start carrying out binding studies in various tissues before that time.[1] As mentioned in the structure-activity relationship chapter above, certain groups are important for the activity. The most important groups are the 5-methoxy group and the acylaminoethyl side-chain, because they bind to and activate the receptors.[3][4] The –NH group of the indole ring is not important for binding and activation. Therefore it is possible to replace it with other aromatic ring systems. The aromatic ring and the ethyl side-chain hold the correct distance between those two groups. The correct distance is the key to good binding and more important than what type of aromatic ring system the analogue contains. Therefore it is possible to use different ring systems in melatonin receptor analogues, if the distance is right.[1][3][4]

The melatonin receptors consist of proteins around 40 kDa each. The MT1 receptor encodes 350 amino acids and the MT2 encodes 362 amino acids. The binding of melatonin and its analogues to the receptors is not fully known. The binding space for melatonin and analogues on the MT1 receptor is smaller than on the MT2.[4] Investigations usually focus on two binding pockets, for the two side-chains. The binding pocket of the 5-methoxy group is more investigated than the other pocket.[4][5] Researchers agree that the oxygen in the group binds to histidine (His) residues in transmembrane 5 (TM5) domain of the receptor with a hydrogen bond; His195 in MT1 and His208 in MT2.[3][4] Another amino acid, valine 192 (Val), also participates in the binding of the 5-methoxy group by binding to the methyl portion of the group.[4]

The binding of the N-acetyl group is more complex and less known. The important amino acids in the binding pocket for this group differ between the two receptors. Serines, Ser110 and Ser114, in the TM3 domain seem to be important for binding to the MT1 receptor. However, aspargine 175 (Asn) in the TM4 domain is likely to be important for the MT2 receptor.[4] The aromatic ring system in melatonin and analogues most likely contributes some binding affinity by binding to aromatic rings of the amino acids phenylalanine (Phe) and tryptophan (Trp) in the receptor. The bonds that form are van der Waals interactions.[3] The N-acetyl binding and binding pocket, binding of the ring system and important domains are somewhat known and need further investigation.[1][3][4]

There are two melatonin agonists on the market today (November 2010); ramelteon (Rozerem®) and agomelatine (Valdoxan®, Melitor®, Thymanax®). Ramelteon was developed by Takeda Pharmaceutical Company and approved in the United States 2005. Agomelatine was developed by the pharmaceutical company Servier and approved in Europe 2009. Two melatonin agonists have received orphan drug designation and are going through clinical trials in the United States: Tasimelteon and TIK-301. Tasimelteon is being developed by Vanda Pharmaceuticals and completed the phase III trial in 2010. Originally TIK-301 was developed by Eli Lilly and Company and called LY-156,735, it wasn´t until July 2007 that Tikvah Pharmaceuticals took over the development and named it TIK-301. It is now in phase II trials and has been since 2002.[1][14]

Discovery and development of TRPV1 antagonists