In cell biology, Protein kinase A (PKA) refers to a family of enzymes whose activity is dependent on cellular levels of cyclic AMP (cAMP). PKA is also known as cAMP-dependent protein kinase (EC 2.7.11.11). Protein kinase A has several functions in the cell, including regulation of glycogen, sugar, and lipid metabolism.

It should neither be confused with AMP-activated protein kinase - which, although being of similar nature, may have opposite effects - [1] nor with cyclin-dependent kinases (Cdks). 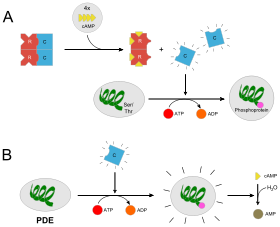 Each PKA is a holoenzyme that consists of two regulatory and two catalytic subunits. Under low levels of cAMP, the holoenzyme remains intact and is catalytically inactive. When the concentration of cAMP rises (e.g., activation of adenylate cyclases by G protein-coupled receptors coupled to Gs, inhibition of phosphodiesterases that degrade cAMP), cAMP binds to the two binding sites on the regulatory subunits, which leads to the release of the catalytic subunits.

The free catalytic subunits can then catalyse the transfer of ATP terminal phosphates to protein substrates at serine, or threonine residues. This phosphorylation usually results in a change in activity of the substrate. Since PKAs are present in a variety of cells and act on different substrates, PKA and cAMP regulation are involved in many different pathways.

The mechanisms of further effects may be divided into direct protein phosphorylation and protein synthesis:

Thus, PKA is controlled by cAMP. Also, the catalytic subunit itself can be down-regulated by phosphorylation.

Downregulation of protein kinase A occurs by a feedback mechanism: One of the substrates that are activated by the kinase is a phosphodiesterase, which quickly converts cAMP to AMP, thus reducing the amount of cAMP that can activate protein kinase A.

The 2 regulatory subunits of protein kinase A are important for localizing the kinase inside the cell. With the aid of A-kinase anchor protein (AKAP), AKAP binds both to the regulatory subunits and to either a component of cytoskeleton structure or a membrane of an organelle, anchoring the enzyme complex to a particular subcellular compartment.

PKA phosphorylates other proteins, altering their function. As protein expression varies from cell type to cell type, the proteins that are available for phosphorylation will depend upon the cell in which PKA is present. Thus, the effects of PKA activation vary with cell type:

In adipocytes and hepatocytes

Adrenaline and glucagon affect the activity of protein kinase A by changing the levels of cAMP in a cell via the G-protein mechanism, using adenylate cyclase. Protein Kinase A acts to phosphorylate many enzymes important in metabolism. For example, protein kinase A phosphorylates acetyl-CoA carboxylase and pyruvate dehydrogenase. Such covalent modification has an inhibitory effect on these enzymes, thus inhibiting lipogenesis and promoting net gluconeogenesis. Insulin, on the other hand, decreases the level of phosphorylation of these enzymes, which instead promotes lipogenesis. Recall that gluconeogenesis does not occur in myocytes.

PKA helps transfer/translate the dopamine signal into cells. It has been found (postmortem) to be elevated in the brains of smokers, in the nucleus accumbens, which mediates reward and motivation: a part of the brain acted on by "virtually all" recreational drugs, as well as "in the area of the midbrain that responds to dopamine, which acts as a 'reward chemical' in smokers and former-smokers." [8]