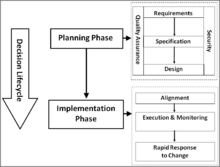 To accomplish this ambitious goal, decision engineering applies an engineering approach, building on the insight that it is possible to design the decision itself using many principles previously used for designing more tangible objects like bridges and buildings. This insight was previously applied to the engineering of software—another kind of intangible engineered artifact—with significant benefits.[2]

As in previous engineering disciplines, the use of a visual design language representing decisions is emerging as an important element of decision engineering, since it provides an intuitive common language readily understood by all decision participants. Furthermore, a visual metaphor[3] improves the ability to reason about complex systems[4] as well as to enhance collaboration.

In addition to visual decision design, there are other two aspects of engineering disciplines that aid mass adoption. These are: 1) the creation of a shared language of design elements and 2) the use of a common methodology or process, as illustrated in the diagram above.

The need for a unified methodology of decision making is driven by a number of factors that organizations face as they make difficult decisions in a complex internal and external environment.

Recognition of the broad-based inability of current methods to solve decision making issues in practice comes from several sources, including government sources and industries such as telecommunications, media, the automotive industry, and pharmaceuticals.

The car is becoming an expression of identity, values, and personal control in ways that move far beyond traditional segmentation and branding. For example, fuel efficiency will be only one consideration for a socially responsible vehicle (SRV). What percent of the parts are recyclable? What is the vehicle's total carbon footprint? Are there child labor inputs? Toxic paints, glues, or plastics? How transparent is the supply chain? Is the seller accountable for recycling? What methods are used? Are fair labor practices employed?
— Shoshana Zuboff, The GM Solution: Life Boats, Not Life Support. Business Week, November 18, 2008

We live in a dynamic world in which the pace, scope, and complexity of change are increasing. The continued march of globalization, the growing number of independent actors, and advancing technology have increased global connectivity, interdependence and complexity, creating greater uncertainties, systemic risk and a less predictable future. These changes have led to reduced warning times and compressed decision

Unlike other decision making tools and methodologies, decision engineering seeks to bring to bear a number of engineering practices to the process of creating a decision. These include requirements analysis, specification, scenario planning, quality assurance, security, and the use of design principles as described above. During the decision execution phase, outputs produced during the design phase can be used in a number of ways; monitoring approaches like business dashboards and assumption based planning are used to track the outcome of a decision and to trigger replanning as appropriate. One view of how some of these elements combine is shown in the diagram at the start of this article.

Like related engineering disciplines before it, decision engineering promises improvements in the quality of decisions made, the ability to make them more quickly, the ability to align organizational resources more effectively around a change in decisions, and lowers the risks associated with decisions. Furthermore, a designed decision can be reused and modified as new information is obtained.

Bringing numerical methods to the desktop

Although many elements of decision engineering, such as Sensitivity analysis and analytics are mature disciplines, they are not in wide use by decision makers. Decision engineering seeks to create a visual language that serves to facilitate communication between them and quantitative experts, allowing broader utilization of these and other numerical and technical approaches.

In particular, dependency links in a decision model represent cause-and-effect (as in a causal loop diagram), data flow (as in a data flow diagram), or other relationships. As an example, one link might represent the connection between "mean time to repair a problem with telephone service" and "customer satisfaction", where a short repair time would presumably raise customer satisfaction. The functional form of these dependencies can be determined by a number of approaches. Numerical approaches, which analyze data to determine these functions, include machine learning and analytics algorithms (including artificial neural networks), as well as more traditional regression analysis. Results from operations research and many other quantitative approaches have a similar role to play.

When data is not available (or too noisy, uncertain, or incomplete), these dependency links can take on the form of rules as might be found in an expert system or rule-based system, and so can be obtained through knowledge engineering.

In this way, a decision model represents a mechanism for combining multiple relationships, as well as symbolic and subsymbolic reasoning, into a complete solution to determining the outcome of a practical decision.

It is interesting to note that, despite decades of development of decision support system and methodologies (like decision analysis), these are still less popular than spreadsheets as primary tools for decision making. Decision engineering seeks to bridge this gap, creating a critical mass of users of a common methodology and language for the core entities included in a decision, such as assumptions, external values, facts, data, and conclusions. If a pattern from previous industries holds, such a methodology will also facilitate technology adoption, by clarifying common maturity models and road maps that can be shared from one organization to another.

Decision engineering is considered an improvement upon current organizational decision making practices, which include the use of spreadsheets (difficult to QA, hard to collaborate and discuss), text (sequential in nature, so is not a good fit for how information flows through a decision structure), and verbal argument. The movement from these largely informal structures to one in which a decision is documented in a well understood, visual language, echoes the creation of common blueprint methodologies in construction, with promise of similar benefits.

Decision engineering is both a very new and also a very old discipline. Many of its elements—such as the language of assessing assumptions, using logic to support an argument, the necessity of critical thinking to evaluate a decision, and understanding the impacts of bias—are ancient. Yet the realization that these elements can form a coherent whole that provides significant benefits to organizations by focusing on a common methodology is relatively new.

Because it makes visible the otherwise invisible reasoning structures used in complex decisions, the design aspect of decision engineering draws from other conceptual representation technologies like mind mapping, conceptual graphs, and semantic networks. The basic idea is that a visual metaphor enhances intuitive thinking, inductive reasoning, and pattern recognition—important cognitive skills usually less accessible in a verbal or text discussion. A business decision map can be seen as one approach to a formal decision language to support decision engineering. See, e.g., Waring, 2010[5].

Decision engineering recognizes that many aspects of decision making are based on intangible elements, including opportunity costs, employee morale, intellectual capital, brand recognition and other forms of business value that are not captured in traditional quantitative or financial models. Value network analysis—most notably Value network maps—are therefore relevant here.