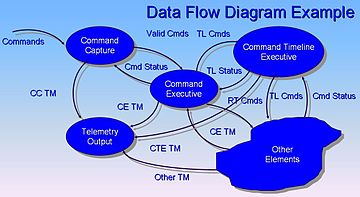 A data flow diagram (DFD) is a graphical representation of the "flow" of data through an information system, modelling its process aspects. Often they are a preliminary step used to create an overview of the system which can later be elaborated.[2] DFDs can also be used for the visualization of data processing (structured design). 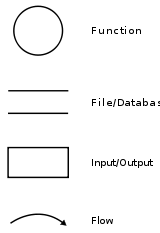 It is common practice to draw the context-level data flow diagram first, which shows the interaction between the system and external agents which act as data sources and data sinks. On the context diagram the system's interactions with the outside world are modelled purely in terms of data flows across the system boundary. The context diagram shows the entire system as a single process, and gives no clues as to its internal organization.

This context-level DFD is next "exploded", to produce a Level 0 DFD that shows some of the detail of the system being modeled. The Level 0 DFD shows how the system is divided into sub-systems (processes), each of which deals with one or more of the data flows to or from an external agent, and which together provide all of the functionality of the system as a whole. It also identifies internal data stores that must be present in order for the system to do its job, and shows the flow of data between the various parts of the system.

Data flow diagrams were proposed by Larry Constantine, the original developer of structured design,[3] based on Martin and Estrin's "data flow graph" model of computation.

In the course of developing a set of levelled data flow diagrams the analyst/designers is forced to address how the system may be decomposed into component sub-systems, and to identify the transaction data in the data model.