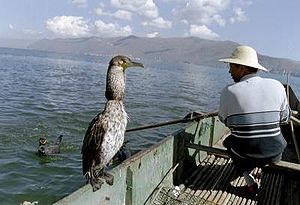 Chinese fisherman with one of his cormorants on Erhai Lake near Dali, Yunnan

Cormorant fishing is a traditional fishing method in which fishermen use trained cormorants to fish in rivers. Historically, cormorant fishing has taken place in Japan and China from around 960 AD.[1] and recorded from other places throughout the world.

To control the birds, the fishermen tie a snare near the base of the bird's throat. This prevents the birds from swallowing larger fish, which are held in their throat, but the birds can swallow smaller fish. When a cormorant has caught a fish in its throat, the fisherman brings the bird back to the boat and has the bird spit the fish up. Though cormorant fishing once was a successful industry, its primary use today is to serve the tourism industry.

The types of cormorants used differ based on the location. In Gifu, Japan, the Japanese Cormorant (P. capillatus) is used; Chinese fishermen often employ Great Cormorants (P. carbo).[2] Darters (Anhinga), which are very close relatives of cormorants, are also used for this fishing technique on occasion. 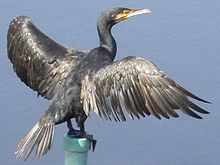 The Chinese often use the Great Cormorants

In Guilin, China, cormorant birds are famous for fishing on the shallow Lijiang River.

Cormorant fishing is an old tradition in Macedonia[3], especially on Dojran Lake in the south-eastern part of the country, where it is still practiced today by some traditional fishermen. In Western Europe, cormorant fishing took place briefly from the 16th to 17th centuries, primarily in England and France. Though the fishing method was similar to those used in Japan and China, the European method was developed independently and was closely related to falconry.