Cornish emigration to the United States

Tangier Island is an island in lower Chesapeake Bay in Virginia: some inhabitants have a Cornish accent that traces back to the Cornish settlers who arrived there in 1686.[3]

The coinciding of the decline of the mining industry in Cornwall in the 19th century and the discovery of large amounts of mineral deposits abroad meant that Cornish families headed overseas for work. Each decade between 1861 and 1901, a fifth of the entire Cornish male population migrated abroad – three times the average for England and Wales. In total, the county lost over a quarter of a million people between 1841 and 1901.[4]

Large numbers of Cornish people moved to the United States, and while some stayed in New York City and other East Coast ports after arriving, many moved inland to mining areas in California, Wisconsin, Pennsylvania and Michigan. One such area was Mineral Point, Wisconsin, in which the largest group of immigrants were Cornish miners attracted to the lead mining opportunities, and by 1845 roughly half of the town's population had Cornish ancestry.[5] Today the Cornish town of Redruth is twinned with Mineral Point.

Cornish culture in the United States 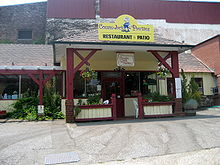 Mineral Point, Wisconsin claims to serve authentic Cornish food, such as pasties and figgyhobbin,[6] and Cornish pasties are sold at ex-Cornish mining towns in America.

In California, statues and monuments in many towns pay tribute to the influence of the Cornish on their development.[7] In the city of Grass Valley, the tradition of singing Cornish carols lives on and one local historian of the area says the songs have become "the identity of the town". Some of the members of today's Cornish Carol Choir are in fact descendants of the original Cornish gold miners. The city holds St Piran's Day celebrations every year, which along with carol singing, includes a flag raising ceremony, games involving the Cornish pasty, and Cornish wrestling competitions.[8] The city is twinned with Bodmin in Cornwall.

Cornish immigrant miners are depicted in the TV series Deadwood, speaking their native language, even though Cornish had died out in the 18th century; the actors in the relevant scenes are, in fact, speaking Irish, a related Celtic language, but not mutually intelligible.[9]

Legends of the Fall, a novella by American author Jim Harrison, detailing the lives of a Cornish American family in the early 20th century, contains several Cornish language terms. These were also included in the Academy award winning film of the same name starring Anthony Hopkins as Col. William Ludlow and Brad Pitt as Tristan Ludlow.[10]

Several notable Americans were either born in Cornwall or have family connections to the county.