Order of Merit of the Italian Republic

The Order of Merit of the Italian Republic (Italian: Ordine al merito della Repubblica Italiana) was founded as the senior order of knighthood by the second President of the Italian Republic, Luigi Einaudi in 1951.[1] The highest ranking honour of the Republic; it is awarded for "merit acquired by the nation" in the fields of literature, the arts, economy, public service, and social, philanthropic and humanitarian activities and for long and conspicuous service in civilian and military careers. The post-nominal letters for the order are OMRI.[2]

The order effectively replaced as national orders the Civil Order of Savoy (1831), the Order of the Crown of Italy (1868), the Order of Saints Maurice and Lazarus (1572) and the Supreme Order of the Most Holy Annunciation (1362), which the sovereign, as Grand Master, did not abdicate on the abolition of the monarchy and continues to award in exile as fons honorum.[3] Today, these continue merely as dynastic orders of the former Royal House of Savoy. Whilst their bestowal is suppressed by law in Italy, the continued use of those decorations conferred prior to 1951 is permitted, exclusive of any right of precedence in official ceremonies.[4]

Investiture takes place biannually on 2 June, anniversary of the foundation of the Republic and on 27 December, anniversary of the promulgation of the Italian Constitution. However, those awards on Presidential motu proprio, related to termination of service or granted to foreigners may be made at any time. The badge, modified in 2001, bears the inscription Al Merito della Repubblica encircling the national coat of arms on the obverse and Patriæ Unitati and Civium Libertati encircling the head of Italia Turrita on the reverse.[5] The five degrees with corresponding ribbons are as follows (with numbers to June 2011): 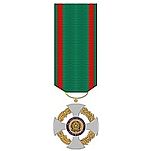 Insignia of a Knight of the Italian Republic, since 2001