Christopher Paul "Chris" Colfer[1][2] (born May 27, 1990)[3] is an American actor and singer known for his portrayal of Kurt Hummel on the television series Glee, for which he won a 2011 Golden Globe for Best Supporting Actor and was also nominated twice for an Emmy.

Colfer was named in Time magazine's 100 most influential people in the world in 2011.[4]

Colfer was born in Clovis, California, the son of Karyn (née Boling) and Tim Colfer.[5] Colfer has Irish ancestry; he has stated "I’m very Irish, my family is all Irish and St. Patrick’s day in my house is crazy."[6] He was home schooled for half of 7th grade and 8th grade because he was bullied so much in school.[7]

While a student at Clovis East High School, Colfer was involved with the Speech & Debate program where he won "many speech and debate Champion titles," including placing 9th in the State Competition for Dramatic Interpretation, the drama club, the FFA, "was president of the Writer’s Club, editor of the school's literary magazine, and captain of Destination ImagiNation."[8] As a high school senior, he wrote, starred in, and directed a spoof of Sweeney Todd entitled "Shirley Todd", in which all of the roles were gender-reversed.[9] One of his real in-school experiences was later turned into a sub-plot for his character on Glee, when the high school teachers denied him the chance to sing "Defying Gravity" from the musical Wicked because it is traditionally sung by a woman.[10][11] His grandmother, a minister, let him sing the song in her church.[10] 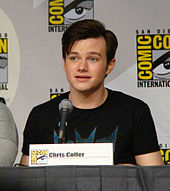 The first show he was involved in with community theater was West Side Story.[12]

When he was younger, he also starred in a production of The Sound of Music as the character "Kurt".

At the age of eighteen, Colfer starred as Russel Fish in Russel Fish: The Sausage and Eggs Incident, a short film where an awkward teenager must pass a Presidential Physical Fitness test or fail gym class and lose his admission to Harvard University.

Colfer's first TV role came in 2009 when he was cast as Kurt Hummel on Fox's Glee. Kurt is a fashionable gay countertenor who is routinely bullied at school, not only for being gay, but also for being part of the very unpopular Glee Club. Colfer auditioned for the part of Artie Abrams, who uses a wheelchair, which eventually went to Kevin McHale. The show's creator, Ryan Murphy, was so impressed with Colfer that he created the role of Kurt specifically for him,[13] and in the process, scrapped a planned character called Rajish so they could add Hummel. In a 2010 interview with Allison Kugel, Colfer stated that "There have been a couple of times when I have gone to Ryan Murphy and told him a couple of things that have happened to me, and then he writes it into the show. Or he’ll ask me what song I would want to sing, in this situation or in that situation. I don’t think any of us directly try to give input on the character or on the storyline, but they definitely steal things from us."[11]

Ryan Murphy revealed in an interview with the Hollywood Reporter that at the conclusion of Glee's third season, Colfer's character Kurt will graduate from Mckinley High along with Rachel (actress Lea Michele) and Finn (Cory Monteith). At the 2011 San Diego Comic-Con, producer Brad Falchuk stated that "because they’re graduating doesn’t mean they’re leaving the show." Falchuk also stated "it was never our plan or our intention to let them go…. They are not done with the show after this season."[14]

Colfer has explained that Hummel "puts on a very confident, 'I'm better than you' persona, but underneath it all he's the same anxious and scared teen everyone is/was at some point. In later episodes, he goes through an identity crisis, accepting and finding acceptance for who he is. [...] He's a tough guy in designer clothes."[15] The character is also gay, which is at the crux of many of his conflicts on the show. Colfer has a high vocal range, as displayed in the episode "Wheels", in which his character demonstrates the unusual ability (for a man) of singing a "high F" (actually an F5). However, his character deliberately pretends to be unable to sing the note in order to spare his father the harassment he would receive for having a gay son.[16]

Writing and other work

Colfer will star in the coming-of-age comedy Struck by Lightning that has been set up with David Permut (Youth in Revolt). The plot revolves around Colfer's character, who is struck and killed by a bolt of lightning, and chronicles his exploits as he blackmails his fellow senior classmates into contributing to a literary magazine he's publishing. Colfer also wrote the script for "Struck By Lightning," which was shot during the Glee hiatus in the summer of 2011.[18]

Colfer is openly gay[20] and shared on Access Hollywood that his parents were accepting of him but he was frequently bullied at school.[9][21][22] Colfer's sister, Hannah, suffers from severe epilepsy, and often experiences over fifty seizures in an hour.[23] Colfer has commented that when he was younger he used acting as a method of escaping the stress involved with having a family member with disabilities.[24]

Colfer appeared on the British chat show Friday Night with Jonathan Ross on June 18, 2010, along with his fellow Glee co-stars Amber Riley and Matthew Morrison. He demonstrated his skill with a pair of sai, revealing that he bought a pair on eBay and regularly practices in his trailer. He also mentioned that he would like it if his sai swords could be worked in to an episode of Glee; they first appeared in the season 3 episode I Am Unicorn, during Colfer's character Kurt Hummel's performance of "I'm the Greatest Star", from the musical Funny Girl.[25] 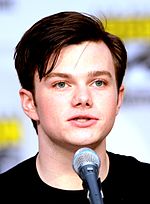