Comic-Con International also produces two other conventions, WonderCon and the Alternative Press Expo (APE), both held in San Francisco, California. Since 1974, Comic-Con has bestowed its annual Inkpot Award to guests and persons of interest in the industries of popular arts as well as to members of Comic-Con's Board of Directors and convention committee. It is also the home of the Will Eisner Awards.

Originally showcasing comic books, science fiction/fantasy and film/television (as was evident by the three circled figures appearing in Comic-Con's original logo), and related popular arts, the convention has expanded over the years to include a larger range of pop culture elements, such as horror, animation, anime, manga, toys, collectible card games, video games, webcomics, and fantasy novels. The convention is the largest in the Americas, and fourth largest in the world after the Comiket in Japan, the Angoulême International Comics Festival in France,[4][5][6] and the Lucca Comics and Games in Italy, filling to capacity the San Diego Convention Center with over 130,000 attendees in 2010.

The convention was founded by Detroit, Michigan-born comics fan Shel Dorf, who in the mid-1960s had mounted the Detroit Triple-Fan Fairs, one of the first commercial comics-fan conventions. When he moved to San Diego, California in 1970,[7] he organized a one-day convention (Golden State Comic-Minicon) on March 21, 1970 "as a kind of 'dry run' for the larger convention he hoped to stage." Dorf went on to be associated with the convention as president or manager, variously, for many years until becoming estranged from the organization.[8]

Following the initial gathering, Dorf's first three-day San Diego comics convention, the Golden State Comic-Con,[7] drew 300 people[9] and was held at the U. S. Grant Hotel[7] from August 1–3, 1970.[10] Other locations in the convention's early years included the El Cortez Hotel, the University of California, San Diego, and Golden Hall, before being moved to the San Diego Convention Center in 1991.[11] Richard Alf,chairman in 1971, has noted an early factor in the Con's growth was an effort "to expand the Comic-Con [organizing] committee base by networking with other fandoms such as the Society for Creative Anachronism and the Mythopoeic Society, among others. (We found a lot of talent and strength through diversity)."[12] By the late 1970s the show had grown to such an extent that Bob Schreck recalled visiting with his then-boss Gary Berman of Creation Conventions and reflecting, "While [Berman] kept repeating (attempting to convince himself) 'This show's not any bigger than ours!' I was quietly walking the floor stunned and in awe of just how much bigger it really was. I was blown away."[13]

The convention is organized by a panel of 13 board members, 16 to 20 full-time and part-time workers, and 80 volunteers who assist via committees. Comic Con International is a non-profit organization, and proceeds of the event go to funding it, as well as the Alternative Press Expo (APE) and WonderCon.[11] In September 2010, the convention announced that it would stay in San Diego through 2015.[14][15]

According to the San Diego Convention and Visitor's Bureau the convention has an annual regional economic impact of $162.8 million.[16][17] 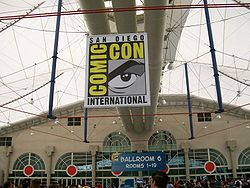 Along with panels, seminars, and workshops with comic book professionals, there are previews of upcoming feature films, portfolio review sessions with top comic book and video game companies, and such evening events as awards ceremonies and the Masquerade, a costume contest, as well as the Comic-Con International Independent Film Festival, which showcases shorts and feature length movies that do not have distribution or distribution deals.

Traditional events include an eclectic film program, screening rooms devoted to Japanese animation, gaming, programs such as cartoonist Scott Shaw!'s "Oddball Comics" slide show and animation expert Jerry Beck's program featuring TV's "worst cartoons ever", as well as over 350 hours of other programming on all aspects of comic books and pop culture.

Like most comic-book conventions, Comic-Con features a large floorspace for exhibitors. These include media companies such as movie studios and TV networks, as well as comic-book dealers and collectibles merchants. Like most comics conventions, Comic-Con includes an autograph area, as well as the Artists' Alley where comics artists can sign autographs and sell or do free sketches. Despite the name, artists' alleys can include writers and even models.

In the 21st century, the convention has drawn toy and collectibles designers who sell "Comic Con Exclusive" products. Such companies have included Hasbro, Mattel, and Sideshow Collectibles.[18] Most such exclusives are licensed properties of movie, comic book, and animation characters.

Comic-Con International has served as the setting for Mark Hamill's Comic Book: The Movie, and for an episode of the HBO television series Entourage, the latter of which, while set at the event, was not filmed there. Comic-Con also served as an excuse for the fictional characters Seth Cohen and Ryan Atwood's trip to Tijuana, Mexico in the first season of TV series The O.C. The convention also featured prominently as a setting for the Numb3rs episode "Graphic". In Season 4 of Beauty and the Geek, an episode was featured where the contestants traveled to Comic-Con 07 and were given a challenge to create their own superheroes. In an episode of Punk'd, Hilary Swank gets Punk'd after an "attack from talking robot." In Season 5, episode six of the Showtime show Weeds, attendees from Comic Con 2009 are seen in Silas and Doug's medicinal marijuana club.

It was been reported that a mock up of the external area near Hall D of the Convention Center depicting Comic-Con would be shown in the movie Paul which stars Simon Pegg and Nick Frost.[19] Issue #72 of The Invincible Iron Man (1974) was set at the July–August 1974 Comic-Con at the El Cortez Hotel, and featured cameos by a few of the special guests.

Comic-Con is frequently mentioned in the CBS television show The Big Bang Theory as an event the characters enjoy attending.[episode needed] On the Futurama episode "Lrrreconcilable Ndndifferences", the main characters attend the 3010 convention (with it being referred to as "Comic-Con Intergalactic" and the iconic eye logo now sporting multiple eyes), where Fry looks for approval for his own comic while Bender attends a panel from Matt Groening (creator of Futurama as well as The Simpsons) on his new show "Futurella" (a twist on the title of the show and a parody of its cancellation by Fox).

In "It's My Party and I'll Bang If I Want To", an episode of the 2011 season of The Real World: San Diego, the cast attends Comic-Con made up as zombies in order to pass out promotional flyers for the House of Blues, where they worked as part of their season work assignment.[20][21]

Evanier on an early spillover venue:

Comic Con crowds in 2001 as seen from a helicopter - Panorama

In 2008, all memberships were sold out before the convention for the first time ever. This sellout has given rise to the new phenomenon of Comic-Con memberships being scalped for exorbitant prices on websites such as eBay.[26]

In April 2008, David Glanzer, Comic-Con's director of marketing and public relations, commented on the organization's desire to remain in San Diego:

We've been approached by other cities, [but] I don't think anybody wants to leave San Diego. I certainly don't. It's a perfect fit for us. It's expensive, whether it be paying for the street signs that tell you what streets are closed, or for any police or the hall or any of the myriad things, it's expensive. But it's a great city. There's been some talk of expansion of the center, which we would certainly welcome. Hopefully if everything lines up, we will be here for many more years.[11]

Heidi McDonald reported on her blog The Beat as of October 7, 2009 Preview Night for the 2010 show has already sold out. Glazner explained the early sell-out:

On February 23, 2010, The Orange County Register reported that the larger Anaheim Convention Center in Anaheim would be making a bid to become the new home of Comic-Con starting in 2013.[29] On September 30, 2010 Comic Con announced that they have extended their stay up to 2015.

The North County Times reported on July 26, 2010 that 4-day passes with access to Preview night for the 2011 Convention sold out two hours before the 2010 convention closed.[30]