Children in the Israeli–Palestinian conflict

Children in the Israeli–Palestinian conflict 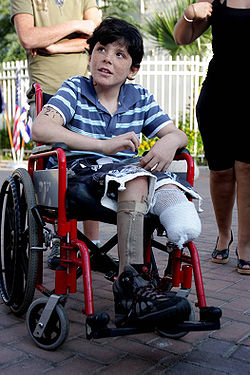 About 70% of the Israeli children were killed in Palestinian suicide bombings. Others were killed in shootings and attacks on cars and buses. Examples include:

According to Amnesty International, between 2000 and 2004 "more than 100 Israeli children... [were] killed and hundreds of others injured in suicide bombings, shootings and other attacks carried out by Palestinian armed groups in Israel and in the Occupied Territories."[8] 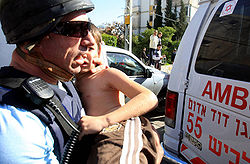 In 2008, a Palestinian gunman shot and killed 8 teenagers at the Mercaz HaRav religious school in Jerusalem, and wounded 11. A 2009 poll found that 84 percent of Palestinians supported the attack. Support was 91 percent in the Gaza Strip compared to 79 percent in the West Bank.[9]

The first recorded incident of Palestinian children killed by IDF was in November 1950 when three Palestinian children from the village of Yalo aged 8, 10 and 12, were shot near Dayr Ayyub in the Latrun salient. According to adult witnesses, "only one man fired at them with a sten-gun but none of the detachment attempted to interfere."[10] In February 1953, one of five Arab shepherds shot in al-Burj was 13 years old.[11] During the 1952 Beit Jala raid, 4 children ranging in age from 6 to 14 were killed by machine gun fire.[12] 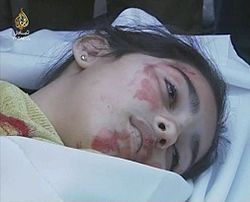 According to the Defence of Children International (DCI),[14] of the "595 children killed [29 September 2000 to 30 June 2004], 383, or 64.4%, died as a result of Israeli air and ground attacks, during assassination attempts, or when Israeli soldiers opened fire randomly" and "212 children, or 35.6%, died as a result of injuries sustained during clashes with Israeli military forces".[15] The DCI estimates that from the 1 January 2001 until 1 May 2003, at least 4,816 Palestinian children were injured, with the majority of injuries resulting from Israeli army activity while the children were going about their normal activities.[16][17] According to Amira Hass, 54 minors were brought to UNRWA clinics with head wounds from August 1989 to August 1993. [18]The Association of Israeli and Palestinian Physicians for Human Rights (PHR-Israel) estimates that a child under the age of six was shot in the head every two weeks during the Al Aqsa Intifada.[19]Amnesty International accused Israeli forces of inadequately investigating killings of children during the Al-Aqsa Intifada,[20] while also condemning the killings of Israeli children by suicide bombings and other attacks by Palestinians.[8]

In 2000, Arab journalist Huda Al-Hussein stated that: "While UN organizations save child-soldiers, especially in Africa, from the control of militia leaders who hurl them into the furnace of gang-fighting, some Palestinian leaders…consciously issue orders with the purpose of ending their childhood, even if it means their last breath."[21]

According to the Coalition to Stop the Use of Child Soldiers "2004 Global Report on the Use of Child Soldiers", there were at least nine documented suicide attacks involving Palestinian minors between October 2000 and March 2004.[22] According to the Israel Defense Forces from September 2000 through 2003, 29 suicide attacks have been carried out by youth under the age of 18, 22 shootings attacks and attacks using explosive devices were carried out by youth under the age of and more than 40 youths under the age of 18 were involved in attempted suicide bombings that were thwarted. According to the Coalition, "[t]here was no evidence of systematic recruitment of children by Palestinian armed groups. However, children are used as messengers and couriers, and in some cases as fighters and suicide bombers in attacks on Israeli soldiers and civilians. All the main political groups involve children in this way, including Fatah, Hamas, Islamic Jihad, and the Popular Front for the Liberation of Palestine."

According to Mahmud Abbas, Palestinian children are given $1 for each pipe bomb they throw. Former UN Under-Secretary General Olara Otunnu declared:

In 2009, Hussam Abdo, 16, was given $23, a suicide bomber's vest containing 18 kilograms of explosives, and sent to kill Israelis. His family said he was gullible and easily manipulated: "He doesn't know anything (about politics), and he has the intelligence of a 12 year old." [24] 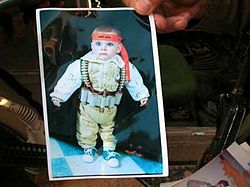 Picture of the "Baby Suicide Bomber"

According to the British TaxPayers' Alliance Coalition against Hate Education, bilateral British and EU aid is being used by the Palestinian National Authority to fund textbooks, television programs and educational activities promoting hate and violence.[25][26]According to the report,

"It is especially worrying that Palestinian children are often the main targets of this destructive propaganda. Messages of murder and martyrdom appear in children’s television programmes, radio and TV broadcasts, a school football tournament, and of course, school textbooks. These are the textbooks that UK-funded teachers are using right across the Palestinian territories."[25]

The report cites the case of a television program, in which the female terrorist, Dalal Mughrabi who participated in the murder of 12 children and 25 adults in a bus attack on Israel in 1978 is celebrated as the "beloved bride, daughter of Jaffa, jasmine flower." [25]In another case, in a school in Tulkarem, a soccer tournament was named after Ziyad Da’as, who planned the 2002 Bat Mitzvah massacre in which a gunman opened fire at a Bat Mitzvah celebration in Hadera, killing six and wounding 30.[25]

The Hamas' on-line magazine for children, al-Fatah (The Conqueror), published since 2002, encourages children to become suicide bombers and promotes hatred of Jews. Al-Fateh (Arabic for "the conqueror"). The bi-weekly magazine features stories and columns praising suicide bombers and attacks against the "Jewish enemy." [27]

Between the ages of 12-14, children can be sentenced for offenses for a period of up to 6 months. After the age of 14, they are tried as adults.[29]In October 2004, 338 Palestinian minors were reported by the DCI to be under arrest by Israeli security forces.[30] DCI has estimated that there have been 2,650 Palestinian child prisoners since the start of the Al-Aqsa Intifada in 2000.[15]

In a 2003 United Nations report, Special Rapporteur Jean Ziegler claimed that over 22 per cent of children under 5 in the Palestinian territories were suffering from malnutrition and 15.6 per cent from acute anaemia." According to the World Bank, food consumption in the Palestinian Territories fell by more than 25 per cent per capita, and food shortages particularly of proteins, were reported.[31]

Researchers are finding high levels of post-traumatic stress disorder among Palestinian children.[32] According to some researchers, the average rate of post-traumatic stress disorder among children from both sides of the Green Line is about 70 per cent.[33][34] Gaza Community Health Programs carried out a study and found that Post Traumatic Stress Disorder (PTSD) rate for children in Gaza was that 54% suffered from severe PTSD, 33.5 % from moderate and 11 % from mild and doubtful levels of PTSD.[33] In a report, published in the Canadian Journal of Psychiatry, it was estimated that the rate of psychological morbidity in the southern region of Bethlehem in the West Bank, to be 42.3% among Palestinian children. The rate was 46.3% for boys and 37.8% for girls. These rates, the study reported, were twice the rate of psychological morbidity in the Gaza strip.[35]

According to an Israeli child psychiatrist, about half of the children in Jerusalem, the city hit hardest by Palestinian violence, experience symptoms of post-traumatic stress disorder, two to three times higher than the rate of children suffering from other causes of trauma. A recent study by Herzog’s trauma centre found that 33 per cent of Israeli youth have been affected personally by terrorism, either by being at the scene of an attack or by knowing someone injured or killed by terrorists. Seventy per cent of those surveyed reported increased subjective fear or hopelessness.[36]

About 26% of Israeli minors killed lived in the Israeli settlements in West Bank and Gaza. According to Miriam Shapira, the director of an emergency crisis centre for West Bank settlers, "Almost every school has students who have experienced close losses. One school had 20 students who had lost a parent in terrorist attacks. About half of the teachers also have had a close relative killed or were themselves involved in an attack."[36]

Herzog Hospital's Israel Centre for the Treatment of Psychotrauma, in Jerusalem, and the UJA-Federation of New York held a conference to examine the effects of terrorism on children in Israel and the United States. Their study shows that despite nearly four years of ongoing terrorism, Israeli children have shown resilience for coping with trauma and pressing on with their lives.[37]

According to the United Nations Children's Fund (UNICEF), some 300 Palestinian schools have been damaged in the conflict. In 2003, 580 schools were periodically forced to close, and some schools were closed after being declared military outposts by the IDF.[38]

Since the Al-Aqsa Intifada, many human rights and non-governmental organizations have raised concerns over Israel's treatment of Palestinian civilians, specifically children. UNICEF, Amnesty International, B'Tselem and individuals such as the British writer Derek Summerfield, have called for Israel to protect children from violence in accordance with the Geneva conventions. The European Union has linked the suspension of Israel/Europe trade agreement talks to human rights issues, especially in regards to children.[39]

However, Georgetown University professor William O'Brien wrote about the active participation of Palestinian children in the First Intifada: "It appears that a substantial number, if not the majority, of troops of the intifada are young people, including elementary schoolchildren. They are engaged in throwing stones and Molotov cocktails and other forms of violence."[40]

The Code of Conduct of the IDF explicitly prohibits targeting non-combatants and dictates proportional force. It also stipulates that soldiers "use their weapons and force only for the purpose of their mission, only to the necessary extent and will maintain their humanity even during combat. IDF soldiers will not use their weapons and force to harm human beings who are not combatants or prisoners of war, and will do all in their power to avoid causing harm to their lives, bodies, dignity and property."

The Israeli government and the IDF have expressed sympathy but deferred responsibility and blame to the Palestinians. They say the deaths of children are a regrettable consequence of war; Islamic militants use children as human shields or deliberately locate themselves in civilian areas during fighting; children are used as child suicide bombers by Palestinian militant organizations;t children engage in acts of extreme violence toward Israeli forces and civilians.[41]

Israeli and international human rights groups claim that show the majority (between 64.4% and 87.7%) of Palestinian child fatalities occurred in circumstances in which the children were clearly not involved in hostilities or clashes with Israeli forces.[15]

The quality of medical care in Israel is significantly better than anywhere in the West Bank and Gaza. Irwin Mansdorf, a member of Task Force on Medical and Public Health Issues, Scholars for Peace in the Middle East wrote about routine care that Palestinians continue to receive in Israeli hospitals and from Israeli physicians.[42] "Palestinians receive care in Israel that they could not receive in any neighboring Arab country. In the last few months alone nearly 200 Palestinian children who were referred under a joint Israeli-Palestinian programme to treat children with serious medical conditions have already undergone major surgery at Israeli hospitals at no cost to the families. Another 350-400 Palestinian children have undergone free diagnostic testing."

"Save A Child's Heart" is a program in which any child with heart problems can receive free medical attention and surgery from select doctors and hospitals within Israel. From 1996 to 2007, 4,591 children had been examined world wide, of the 1848 children treated 828 (45%) were Palestinian.[44]

The families of Yoni Jesner, a Jewish teenager, and Ahmed Khatib, a Palestinian boy, donated their organs to children from the opposite sides of the Israeli-Palestinian conflict.[45] Yoni Jesner died in a suicide bombing in 2002, while Ahmed Khatib was killed by IDF gunfire in 2005. [45]Ahmed Khatib's story was the subject of a PBS documentary "Heart of Jenin".[46]