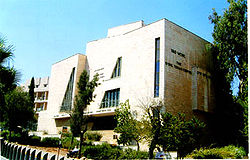 One of the yeshiva buildings

It is the most prominent yeshiva in the religious Zionist world. It has trained the movement's leading rabbis as well as many yeshiva heads, city rabbis, and teachers in religious colleges and high schools. The school was central in shaping the evolution of religious Zionism.

Founded in Jerusalem's Kiryat Moshe neighbourhood in 1924 by Rabbi Abraham Isaac Kook, then chief Ashkenazi rabbi during the British Mandate, it is seen as the first yeshiva to be Zionist in spirit. Rabbi Kook called it "the central world yeshiva," located in Jerusalem to serve as a beacon of Torah to the rest of Israel and to the diaspora. Rav Kook brought Rav Avraham Borstein to serve as the Rosh Yeshiva with him, but Rav Borstein died two years later. After Rav Kook's death in 1935, the yeshiva was named Mercaz Harav after him.

Following Rabbi Kook's death in 1935 his student, Rabbi Yaakov Moshe Harlap, became Rosh Yeshiva.[2] After his passing in 1951, Rabbi Zvi Yehuda Kook, the son of Rabbi Abraham Isaac Kook took up his father's position. In 1982, after Rabbi Zvi Yehuda Kook died, Rabbi Avraham Shapira took the position and led the institution until his death in 2007. His son, Rabbi Yaakov Shapira shlit"a, was his successor. Today, the yeshiva has about 500 students, including 200 students in the yeshiva's kollel (post-graduate division).

In its first decades the college had few students and at times it was not clear whether it would survive. The turning point came in the '50s, when graduates of Bnei Akiva religious schools and high-school yeshivas seeking higher religious education flocked to Mercaz Harav, the only Zionist yeshiva.

The prominent Bnei Akiva headmaster and activist Rabbi Moshe Zvi Neria, a disciple of Rabbi Kook's, encouraged students to go to Mercaz Harav, which was headed from 1952 by Rabbi Abraham Kook's son, Rabbi Zvi Yehuda Kook, until his eventual death.[3]

The list includes a number of Knesset members and community leaders.[4]

The current staff, in order of ages

On the night of March 6, 2008, Alaa Abu Dhein, an Arab from Jabel Mukaber in East Jerusalem, entered the yeshiva with a gun and began firing indiscriminately, killing eight students and wounding 15 others. Abu Dhein's bloody rampage ended with the arrival of Yitzhak Dadon, a part-time student of the yeshiva, and David Shapira, an officer in the Israel Defense Forces, who shot him to death.

The victims, mostly teenagers, were identified as: