Not to be confused with Xavier School.

There were at least two attempts by the alumni of the then Ateneo de Cagayan to revert the name of the University to Ateneo de Cagayan. The first attempt was in the mid 1990's and the second attempt was in 2007. These attempts were, however, not widely supported and in the case of the 2007 proposal, not endorsed by the Xavier University – Ateneo Alumni Association (XU–AAA). Until today, the debate still continues.[1]

The official student publication is The Crusader. Its supreme student government is the Xavier University – Central Student Government.

Xavier University was founded on June 7, 1933 as Ateneo de Cagayan, with only 17 First-year high school students.

It was founded by Fr. James T.G. Hayes, S.J., who became the first Bishop and Archbishop of Cagayan de Oro. It was firstly located at Burgos Street, where the former St. Augustine Parochial School was also located.

Cagayan de Oro, then Cagayan de Misamis, with a population of around 50,000, had the finest port in Mindanao and was a fast-growing town. Gradually, the school grew with the community and opened college courses in June 1938, and Grades 5 to 7 in June 1940 to accommodate requests from parents all over Mindanao and Visayas.

It was then moved to its present location in Corrales Avenue. It eventually grew into a college and offered courses in Liberal Arts, Education and Commerce. The school closed down on December 9, 1941, with only 614 students. It subsequently became the headquarters of the Imperial Japanese Army in Mindanao on May 2, 1942.

On September 9, 1944, U.S. Air Force planes swooped in and bombed most of Cagayan de Misamis into piles of rubble, even for the school itself. Fr. Edward J. Haggerty, S.J., then Rector and Military Vicar to the U.S. Armed Forces from Borneo to Okinawa, wrote these words in his diary:

Fr. Haggerty was awarded the U.S. Bronze Star medal on February 21, 1947 for his services as a volunteer chaplain of the Visayas-Mindanao Force during the war years. He also became an adviser to Fertig's Guerrilla Government. Fr. Haggerty and his successor, Fr. Andrew F. Cervini, S.J., worked to reconstruct the school, and in 1946, regular classes recommenced. This was only interrupted again after the eruption of Mt. Hibok-Hibok on August 30, 1947, when the campus housed refugees from Camiguin, and even sponsored a boxing bout in its gym to raise funds for the victims.

In a bid for university status, Fr. Francisco Z. Araneta, S.J., then rector, had vowed to St. Francis Xavier that if ever Ateneo de Cagayan is conferred as a university before its Commencement Exercises on March 22, 1958, he will rename the university after the saint.

On that fateful day, an hour before the Commencement Exercises, then-Secretary of Education Manuel Lim, had sent a telegram stating that Ateneo de Cagayan has now been granted university status.

On August 27, 1958, Ateneo de Cagayan was inaugurated as a university and had officially become "Xavier University – Ateneo de Cagayan". It became the first university in Mindanao, and the first Jesuit institution, among those existing in the Philippines, even first before its sister school Ateneo de Manila to be given university status. After the inauguration, a banquet was held in honor of then-President Carlos P. Garcia, who was conferred, the very same day, the honorary degree Doctor of Laws, the first honorary degree given by the university.[2]

Today, X.U. has four campuses, a grade school in Macasandig (about 2,000 students); high school in Pueblo and grade school annex (nursery to grade 6, also about 2,000 students); Manresa Complex that houses the College of Agriculture laboratory classes, extension programs and SEARSOLIN; and the Main Campus in Corrales Avenue — where X.U. has about 11,000 college, professional schools and technology students being trained.[citation needed] 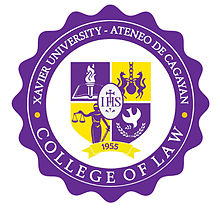 As a Jesuit professional school, the College of Law strives for professional competence, developing men and women trained in the theory and practice of law.[3]

The College aims to instill into the students a Christian outlook as to be worthy members of the legal profession and the community, particularly in the pursuit of truth and the promotion of justice. It also desires to foster a high ethical standard in the legal profession under a regime of liberty and democracy.[3]

Further, it aspires to train the students for leadership and seeks to develop a social conscience within the context of the mission of Xavier University in knowledge, value, and service to God, to the people, the community, and the country.[3]

On November 11, 2011, the college was conferred as "Outstanding Law School" by the Legal Education Board of the Supreme Court of the Philippines, during the second anniversary of the board held at the Manila Pavilion, for being one of the ten best performing law schools in the Philippines from 2001 to 2011. Likewise, a plaque was presented to its dean, Atty. Raul R. Villanueva, as outstanding law dean.[4] 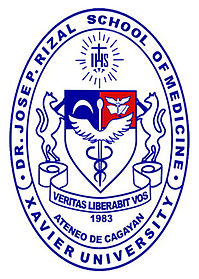 Recently, only 63% out of 16 examinees, all 2008 graduates, with national passing of 46% out of 1344 examinees from around the Philippines, have passed the licensure examination for medical doctors last February 2010.[5]

On October 8, 2009, a memorandum of understanding was signed by then-university president, Fr. Jose Ramon T. Villarin, S.J., Ph.D.; the Archdiocese of Cagayan de Oro, represented by Archbishop Antonio J. Ledesma, S.J., D.D.; and the Mother Provincial of the Sisters of St. Paul de Chartres in the Philippines, Sr. Zeta Caridad Rivero, S.P.C., as a partnership for the ownership of the new Maria Reyna Xavier University Hospital (MRXUH) (formerly Maria Reyna Hospital), which will become the base hospital for the Dr. Jose P. Rizal School of Medicine and the College of Nursing, and the building of the new Emergency room/Operating room (ER/OR) complex.[6]

The College of Agriculture student council is the Agriculture or Aggies Student Council (ASC). Its team is called the Bullriders, and its mascot is the Bull.

On February 27, 2009, the Commission on Higher Education (CHED) in its Memorandum Order No. 3, declared Xavier as a Center of Development (COD) in Agriculture for a period of three years. This title is the first to be given to a private institution.[7] In November 2009, the Commission on Higher Education (CHED) in its Memorandum Order no. 32 series of 2009, announced Xavier as a National Center of Excellence, specifically a Provincial Institute for Agriculture (PIA) under the National Agriculture and Fisheries Education System. As PIA, Xavier will be among the priority partners of CHED in implementing development projects in agriculture. Xavier also qualifies for a half a million grant to fund scholarships, continuing agriculture education programs, instructional materials development and upgrading of facilities including research laboratories, among other priority projects supported by CHED.[8] In April 2010, the College of Agriculture was awarded Level II re-accreditation for a period of five years by the Philippine Accrediting Association of Schools, Colleges and Universities.[9] Recently, the college was awarded Level III accreditation by PAASCU, one year after its Level II re-accreditation.[10]

College of Arts and Sciences

The College of Arts and Sciences offers most of the university's teaching core subjects of all colleges (e.g. Filipino, English). It is home to the largest academic programs with discipline clustering around Humanities, Linguistics, and Natural and Social Sciences. Its student council is the United Arts and Sciences Student Council (UNITASS). Its mascot is the Tiger.[11]

Bachelor of Science (B.S.) in: 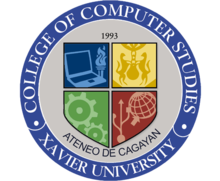 The College of Computer Studies aims to provide quality but affordable education and training service in the field of information technology and computing that is relevant and responsive to the growing domestic and international demand for IT professionals. The College of Computer Studies will carry on with the mission of producing IT-savvy professionals who will be formed according to the Ignatian and Xavier way of preparing men and women to lead and serve others.

The College of Computer Studies had previously been recognized and included in the first batch of Centers of Development for Excellence in Information Technology Education (CODE-IT) by the Commission on Higher Education (CHED) and its flagship BS in Computer Science is one of the first programs outside Metro Manila to be Level II-accredited by the Philippine Accrediting Association of Schools, Colleges and Universities (PAASCU). 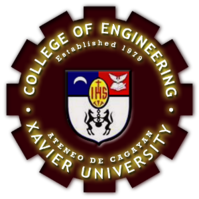 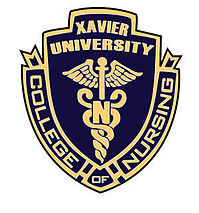 Founded in 1989, the College of Nursing student council is the Council of Nursing Students (CONUS). Its mascot is the Python.

During the 2008 Nursing Licensure Examination, according to the Commission on the Higher Education (CHED), Xavier is ranked #1 among the schools whose students took the board exams.[16]

School of Business and Management 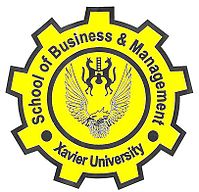 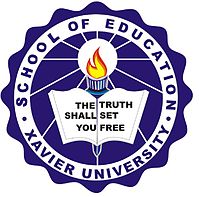 The School of Education was founded in 1938, and was reopened in 1947. Its student council is the Teachers' Guild (TG). Its mascot is the Phoenix.

Institute for the Development of Educational Administrators (IDEA) 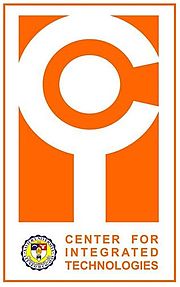 There are two semi-honor classes and one honors class throughout the four year levels in high school. A student may be retained to the semi-honors and honors class provided that he or she will maintain his or her grades no lower than 82%. His or her average must not be lower than 85%. If a student fails two units in the final quarter, he or she will be required to attend the summer classes and will be placed on academic probation the following school year. If the student fails more than two units, he or she will be asked to leave the school.[citation needed]

Xavier University operates on four campuses: the 8-hectare main campus in the heart of Cagayan de Oro City houses the academic units, except for the support farms and extension works of the College of Agriculture; the Grade School Campus in Macasandig; the High School started SY 1999-2000 at a new building at a 13-hectare campus in Pueblo de Oro, a Grade School - Annexed is also at the Pueblo de Oro, and the 50-hectare Manresa Complex on the way to the airport includes the experimental and demonstration farms and extension works of the College of Agriculture, and SEARSOLIN.Currently, the university has a student population of 14,564, excluding that of the preschool, primary and secondary school units.

The University operates as a non-stock education institution governed by its own Board of Trustees with Mr. Elpidio M. Paras, President and CEO of Parasat Cable, Inc., as Chair, and Fr. Roberto C. Yap as University President since June 2011. Fr. Yap succeeded Fr. Jose Ramon T. Villarin, S.J., Ph.D. after the transition period at the Ateneo de Manila University.[22]

One of the five Jesuit colleges and universities in the Philippines, Xavier University works in consortium with Ateneo de Davao University and Ateneo de Zamboanga University.