The Metropolitan Cathedral Basilica of the Holy Saviour (Spanish: Catedral Metropolitana Basílica de San Salvador, Latin: Sancta Ovetensis) is a Roman Catholic cathedral and minor basilica in the centre of Oviedo, in the Asturias region of northern Spain.

The cathedral of San Salvador of Oviedo remains today as a unique example of different architectural styles, from Pre-Romanesque to Baroque, including Romanesque, Gothic and Renaissance parts. Originally, there was a big Pre-Romanesque basilica in the present location of the Sothic cathedral, but nothing is known about that first building (which was built by order of King Alfonso II of Asturias The Chaste).

The Cathedral was founded by King Fruela I of Asturias in 781, and enlarged in 802 by Alfonso II of Asturias, who made Oviedo the capital of Kingdom of Asturias, and with his Court resided here. He created the See of Oviedo in 810. The present edifice was begun by Bishop Gutierre of Toledo in 1388, and the tower added by Cardinal Francisco Mendoza de Bobadilla in 1528.

The Cathedral was restored in the 12th century by Archbishop Pelayo, the chronicler. Bishop Fernando Alfonso (1296–1301) undertook another restoration of the chapter-house, and his successor, Fernando Alvarez (1302–1321), began the cloister. At the end of the 13th century Gutierre de Toledo began the new Gothic basilica, the principal chapel bearing his arms, though it was completed by his successor Guillén. Diego Ramirez de Guzmán (1421–41) built the two chapels of the south transept (now replaced by the sacristy), the old entrance to the church, and the gallery of the cloister adjoining the chapter-house. Alonzo de Palenzuela (1470–85) completed the other part of the transept. Juan Arias (1487–97) left his cognizance, the fleur-de-lys and four scallops, on the nave. Juan Daza (1497–1503) erected the grille of the choir; Valerano (1508–12) added the stained-glass windows. Diego de Muros, founder of the great college at Salamanca known as the Oviedo, had the crestings of the porch wrought by Pedro de Bunyeres and Juan de Cerecedo, while Giralte de Bruselas and Juan de Balmaseda completed in the years 1512 to 1517 the carving of the precious altarpiece ordered by Valeriano Órdoñez de Villaquirán. Cristóbal de Rojas (1546–56) affixed his coat-of-arms to the completed tower, with its octagonal pyramid, one of the marvels of Gothic architecture.

There are some Romanesque remains, as the Southern Tower, or the upper part of the Holy Chamber, which includes a fantastic collection of Romanesque column-statues. The cathedral of San Salvador is mainly a fine gothic building, which was built between 14th and 16th centuries in a Classic and Flamboyant Style. The Chapter Room, whose construction was started in 1388,was the first part of the new gothic cathedral to be finished: built in a classic gothic fashion (including a great eight-sided dome), it was followed by the cloister and the choir (ca.1400). The naves were built once the choir was finished,all through the 15th century. We can admire the progression of the constructive stages, taking as an example the tracery of windows and tryphorium. The sanctuary is still a classical-gothic work, whereas the naves present typical flame-like elements typical of a late-gothic style. 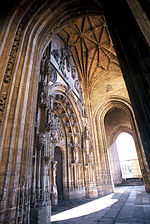 Portico of the Cathedral

The latest medieval part, the narthex, was designed by Juan de Badajoz, whose original project included a double-towered facade (though due to financial issues, only a tower was built). This western tower, one of the best examples of Flamboyant Gothic in Spain, was finished by architect Gil de Hontañón, who added to the structure an openwork chapitel in a modern Renaissance style. Renaissance is also represented by the unique altarpiece placed at the end of the choir, a great piece of sculpture and painting, maybe one of the best of Spain in its kind.

Baroque elements include some lateral private chapels (Capilla de los Vigiles), the Pantheon of Asturian Kings and the ambulatory (recently restored). There are some relevant altarpieces in a profuse baroque fashion too.

The cathedral was also called Sancta Ovetensis[1]; owing to quantity and quality of relics contained in the Cámara Santa (English: Holy Chamber). The Holy Chamber remains as the only sample of the ancient high-medieval complex. It was built as a relics' room to keep the different treasures associated to the Asturian Monarchy (Cross of Angels, Cross of Victory, Agatha Box).

The chief feature of the cathedral is the "Camara Santa", with its venerable relics. Bishop Pelayo relates that the Agatha Box, a coffer made by the disciples of the Apostles, and containing the most precious relics of the Holy City, was taken from Jerusalem to Africa, and after several translations was finally deposited at Oviedo by Alfonso II. In the 16th century, Bishop Cristóbal de Sandoval y Rojas wished to open it, but could not, being overcome with religious fear. Many other relics are to be seen.