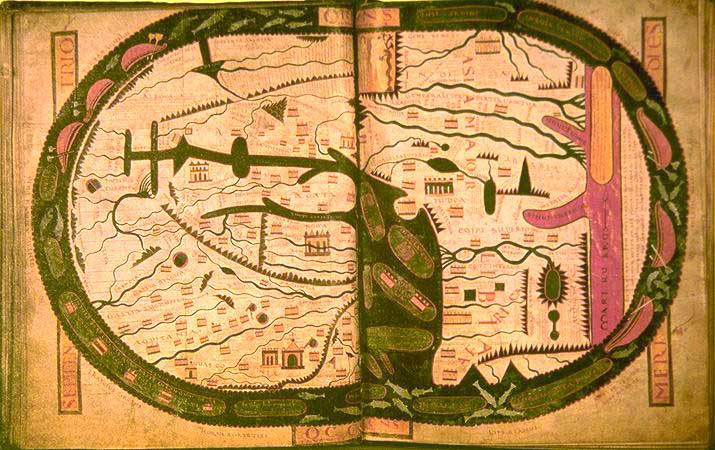 He created an important cultural and religious focal point during the 8th century. He corresponded with Alcuin, and took part in the controversy, criticizing the views of Felix of Urgel and . As to , wife of , and as the master of Alcuin and , Beatus exercised wide influence. He is best remembered today as the author of the "Commentary on the ", written in 776, then revised in 784 and again in 786. This commentary was popular during the and survives in at least 34 manuscripts (usually called a "beatus") from the 10th through the 16th centuries. At least 26 of those manuscripts contain illuminations. Though Beatus may have written his commentaries as a response to Adoptionism in Spain of the late 700s, many believe that the book's popularity in monasteries stemmed from the presence in Spain of , which the Christian religious believed to represent the . Not all of the manuscripts are complete, and some exist only in fragmentary form. Twenty-six of these manuscripts are lavishly decorated in the , Romanesque, or Gothic style of illumination.

The "Commentary" also contains one of the oldest Christian world-maps, thought to represent the description given by in his Etymologies. Although the original manuscript and map have disappeared, copies of the map survive in several of the extant manuscripts. For more information on Beatus of Liébana or on the Beatus Apocalypse manuscripts, see the studies carried out by John Williams, Mireille Mentre, José Camón Aznar, Wilhelm Neuss, Joaquín Yarza Luaces, among others.

To understand the important effect that this book had, one must understand the historical context, as well as the book's content and later interpretations of it.

History of the Kingdom of

Some decades after the first Christian Emperor, , , after he converted to in 380, was the first to make Christianity the official religion of the Empire, forbidding Arian Christianity, cults, and . He was also the last Emperor of a united Empire; at his death, the empire was divided between his two sons in what turned out to be a final separation between East and West. In December, 406, at a time when the had invaded what is now Germany, the Rhine froze over. On the 31st of December, tens of thousands of people of the Germanic tribes, fleeing the Huns, crossed the ice into Gaul, entering the Roman Empire. The settled in Galicia, in the northwest of Spain; the and the went south as far as .

During this time, , chief of the , seized in 410. His successor, , married , daughter of Theodosius. But, pursued by the Roman government based now in , Ataulf went on to Spain. From this time on, the wars between barbarian tribes intensified on the .

But at the same time, these tribes were becoming Romanized, and some of them, like the Visigoths and the , joined with Roman imperial troops to stop the Hun in 451 near (the or the "Battle of the Catalaunian Fields"). died in the battle.

Soon afterwards, , the king of the Visigoths, conquered all Spain and became the first independent sovereign of this tribe. The Roman empire no longer existed. Faithful to , Euric forced the Suebian king of the Asturias to convert.

panish Arianism and the conversion to Catholicism

In 325, a bishop of Córdoba asked Emperor Constantine to convoke the first at Nicea in order to condemn these subordinationist theses (Christ subordinate to God the Father). This proves that there must already have been a strong Arian presence in Spain before the Goths arrived.

The Visigoths, also Arians, anchored the heresyPOV-statement|date=December 2007 even more strongly in the Iberian peninsula. Although they represented less than five percent of the population,Fact|date=July 2007 the remainder of which was Catholic, the Visigoth kings made Arianism the state religion of Spain. The liturgy was said in their .Fact|date=July 2007 The Arian archbishop of their capital, Toledo, was Primate of Spain.

The Catholic clergy took refuge in the countryside. They built oratories, hermitages, and monasteries in the backcountry. The people stayed mostly faithful to Catholicism, the urban population thinned, and the towns began to be isolated.Fact|date=July 2007

In the last quarter of the 6th century, the Visigoth king Liuvigild married Theodosia, the Catholic sister of . Leovigild tried to reconcile the Visigoths with the Hispano-Romans, and accepted the on the nature of Christ. One of his sons married a Catholic granddaughter of . Another son, Reccared I, converted to Catholicism in 587 and officially abjured Arianism during the of 589, bringing with him the queen, the court, and some formerly-Arian Visigothic bishops.

The archbishop of Toledo remained Primate of Spain, and the Church was now upheld by the sovereigns. They named the bishops, who in turn exercised a certain control over the kingdom's administration.

But the Visigoths had to face epidemics, famines, and the incursions of the . Wars of succession ravaged the country. One pretender to the throne of Toledo escaped to (), and asked the troops of the to help him conquer his rival . Thus, in 711, crossed the strait whose name now comes from his (Gibraltar means "the Rock of Tariq").

Expansion of and Catholic resistance

The 7000 men of Tariq were not but , whose lands had been occupied for a short time by the Arabs, who were happy to send them to Spain. This enmity between the two peoples was to make the occupation of Spain more fragile.

Within three years, the Iberian peninsula was occupied, with the exception of the (future kingdom of the ) in the northwest, where high mountains formed a sort of natural fortress. Very early on, rebellious Catholics came there from Toledo and elsewhere, fleeing the Muslim conquest. There, was elected chief of the rebels and began to attack Berber garrisons.

Tranquilly settled in Córdoba, or busy with raids in the south of France, the Muslim forces paid little heed to the rebellion at the beginning. Nevertheless, an expedition was sent to the Asturias. Pelayo, feigning retreat, drew Berbers and Arabs into the gorges of Covadonga, cut them to pieces, and ended up killing most of them near Liebana. The kingdom of the Asturias began to grow around where Pelayo became king, then around , a few kilometers northwest of Oviedo,

While the Asturias grew stronger and became more and more populous and powerful, Christians living under the Muslims found themselves in the same situation as under the yoke of the Visigoths. Subject to special taxes because of their religion, they had no right to build new churches or convents. As before, many took refuge in the countryside. New hermitages appeared in forsaken spots. Christians living in Muslim territory could practice their religion only if they pledged allegiance to a Moorish chief.

In 788 the Visigoth king Bermudo I transferred his capital back to Oviedo, and in spite of the sack of that city in 794, the Reconquest of Spain began.

It is in this historical context, and in a region where refugees had brought a very rich, artistic culture with them, that Beatus (in Spanish, Beato), a monk in a Liebana valley monastery, wrote his commentary on the Book of Revelation.

The Commentary on the ("Commentaria In Apocalypsin")

It is a work of erudition but without great originality, made up principally of compilations. Beatus includes long extracts from the texts of the Fathers of the Church and Doctors of the Church, especially (Saint Augustine), of Milan (Saint Ambrose), Irenaeus of Lyons (Saint ), and (Saint Isidore). He adds to this the commentary on the by Jerome of Stridon ().

The and its origins

The was written in the last part of the 1st century A.D., during the persecution of Christians by the roman emperor . The concept of the , however, came about between the 2nd and 1st century B.C. Even though the is the last book in the , it takes its roots from the last books of the , most notably from the (written around 167 B.C.).Therefore, Revelation has much more of a conceptual and contextual relations with the Jewish beliefs from the than with the of the .

A revelation is a vision of the future revealed to a person and then written in a poetic prose more or less encrypted. Thus the is viewed as a foretelling the end of the world, the . The is also seen as a 'gospel of hope' since it tells the martyred masses that their past suffering on Earth has led them to eternal bliss.

The text itself is quite obscure to those who are not familiar with the biblical culture; a strong knowledge of the biblical and prophetic books is necessary to fully understand it.

After 711 A.D., Spanish found themselves being persecuted by . They could no longer practice their religion openly; bells and processions were forbidden; and were destroyed and were unable to be reconstructed; persecutions often lead to bloody outcomes.

The became a support for the Christian resistance. The in it took on a whole new meaning for them. The beast, which had previously been believed to represent the , now became the , and was no longer , but Córdoba.

The , which before had been interpreted as a of the end of roman persecution, became the cry for and a promise of deliverance and punishment. This naturally appealed to the believing masses and ended up being, at least in occupied Spain, more important to them than the .

"This article draws heavily on the article in the French-language Wikipedia, which was accessed in the version of October 17, 2007.