The Royal Thai Government (RTG)[1] or the Government of Thailand (Thai: รัฐบาลไทย) is the unitary government of the Kingdom of Thailand. Thailand since 1932 has been a constitutional monarchy under a parliamentary democratic system. The country has existed in some form since the 13th century, but the country emerged as a modern nation state after the foundation of the Chakri Dynasty and the city of Bangkok in 1782. The Revolution of 1932 brought an end to absolute monarchy and replaced it with a system of constitutional monarchy. However from then on the democratic system has been weak and the country was ruled by a succession of military leaders installed after coup d’etats, the most recent in 2006. Under the 2007 Constitution (drafted by a military appointed council, but approved by a referendum) the present structure of the Government of Thailand was established. Thailand has so far had seventeen Constitutions; however the basic structure of government has remained the same. The Government of Thailand is made up of three branches: the executive, the legislative and the judiciary, the system of government is modelled after the Westminster system. All branches of the government are located within Bangkok, the capital city of Thailand. 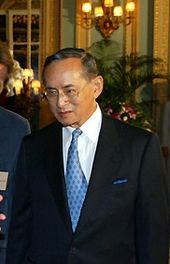 King Bhumibol Adulyadej has been on the throne since 1946.
Main article: Monarchy of Thailand

The King of Thailand, currently King Bhumibol Adulyadej (or Rama IX) is the world’s longest reigning monarch, and has reigned since 1946. The Constitution stipulates that although the sovereignty of the state is vested in the people, the King will exercise such powers through the three branches of the Thai government. Under the constitution the King is given very little power, but remains a figurehead and symbol of the Thai nation. As the Head of State however he is given some powers and has a role to play in the machinations of government. According to the Constitution, the King is the Head of the Armed forces, required to be Buddhist as well as the defender of all faiths in the country. The King also retained some traditional powers such as the power to appoint his heirs, power to grant pardons and the royal assent. The King is aided in his duties by the Privy Council of Thailand.

The King is head of the House of Chakri, the ruling house of Thailand founded by King Buddha Yodfa Chulaloke (or Rama I) in 1782. The Monarchy and the Royal family commands huge respect in Thailand. The present monarch has a great deal of popular respect and moral authority, which has been used at times to resolve political crises. The monarch’s official home is the Grand Palace, however the present King lives primarily in the Chitralada Palace in Bangkok or the Klai Kangwon Villa, in Hua Hin. The Monarch's household is managed by the Bureau of the Royal Household and his finances by the Crown Property Bureau.

The heir to the throne is the Crown Prince of Thailand: Prince Maha Vajiralongkorn. The succession of the Throne is governed by the 1924 Palace Law of Succession, promulgated by King Vajiravudh. The Palace Law follows the male Agnatic Primogeniture, where males are only allowed to succeed and inheritance is passed only from father to son and through male line only.[citation needed] 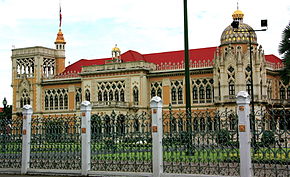 Government House of Thailand, where the office of the Prime Minister and the Cabinet of Thailand are situated

[This article to be updated, with the 2011 election of Pheu Thai government majority and Yingluck Shinawatra as prime minister).

The current Prime Minister is: Yingluck Shinawatra of the Pheu Thai Party, the first female prime minister of Thailand.

The Cabinet of Thailand or the Council of Ministers of Thailand is a council composed of 35: Ministers of State and Deputy Ministers. Who runs the cabinet ministries of the Kingdom. There are currently 20 cabinet ministries, which comprises the main portion of state employees. The Cabinet is also responsible for the formulation and execution of policies of the government. Members of the Cabinet do not necessarily need to be a member of the lower house, as in other countries but most often are. The Office of the Prime Minister and the Cabinet offices are located in a building complex called the Government House of Thailand.

The present Cabinet has been active since the 9 August 2011, when its members were officially sworn in by the King. The Cabinet is made up of five parties that form the current governing coalition: PTP, CTP, PCP, CPP and the independent. The Cabinet comprises: 21 Ministers of State, 5 Deputy Prime Ministers and 12 Deputy Ministers. 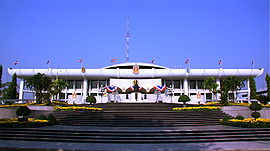 Parliament House of Thailand the meeting place for both the House and the Senate since 1974.

The upper house of the legislative branch was first established in 1946. However for most of its history the Senate has been the stronghold of the military and the elite. The current Senate has 150 members. 76 members are elected each from one per province from the 75 provinces of Thailand and 1 from the Bangkok Metropolitan Area. The other 74 are selected by the Senate Selection Commission, made up of both elected and appointed officials.

The chamber is strictly a non-partisan chamber, and members may not be a member of a partisan organization, House of Representatives, judiciary and the Cabinet for five years. The Senate has little power legislative -wise, but retain considerable powers of scrutiny and appointment. As the Senate is vested with the power to ‘advise’ on the appointment of several members of the Judiciary and independent government agencies. The Senate sits for a set six years non renewable term, the Senate cannot be dissolved. The Senate is presided by a President of the Senate, who is also the Vice President of the National Assembly. He is assisted by two Vice Presidents of the Senate. The last election to the Senate was in 2008.

The House of Representatives

The lower house of the legislative branch has been in existence in some form since 1932. The House of Representatives is the primary legislative house of the government of Thailand. The House comprises 500 members. 375 of the MPs are elected directly from single-seat constituencies around the country. The other 125 members are selected using ‘proportional representation’ through party-lists. There are 8 electoral areas from which the proportionally representative votes are taken and 375 constituencies. This system is called the ‘Mixed Member Majoritarian’ in which a voter has two votes one for the constituency MP and the other for a party in the voter’s electoral area.

The House is a partisan chamber with 7 political parties. The House is the primary legislative chamber and the more powerful of the two houses. The House has the power to remove both the Prime Minister and Cabinet Ministers through a vote of no confidence. The House sits for a term of four years however a dissolution of the House can happen anytime before the expiration of the term. The House is led by the Speaker of the House of Representatives, who is also the President of the National Assembly. He is assisted by two Deputy Speakers. The leader of the largest party or largest coalition party will most likely become Prime Minister, while the leader of the largest party with no members holding any ministerial positions will become the Leader of the Opposition. The Leader of the Opposition is a powerful position with considerable influence, he is assisted by a Shadow Cabinet. The last general election for the House was in 2007.

After the 2007 election the People’s Power party won the most seats with the Democrats and Chart Thai party trailing behind. However after the 2008 political crisis and the ruling of the Constitutional court on the 2 December 2008, in which the PPP plus the Chart Thai and Neutral Democratic Parties (coalition partners), the Prime Minister and several party executives were banned from politics for five years, the composition of the House changed. The successor of the PPP still retained the most seats, however the remainder of the coalition partners defected and joined a Democrat led government which was inaugurated on the 17 December. Leaving the For Thais Party (successor of the PPP) and the Pracharaj Party in the opposition.

The Judiciary of Thailand is composed of three distinct systems: the Court of Justice system, the Administrative Court system and the Constitutional Court of Thailand. There are no stenographic records kept by the trial court and the record is composed of what the judges decide.

The Asian Human Rights Commission called the Thai legal system a "mess" and called for a drastic overhaul of Thailand's criminal procedures. It cited the rampant use of forced confessions, and the fact that even a senior justice ministry official admitted that 30% of cases went to court with no evidence. It also criticized the judiciary for failing to ensure that trials are conducted speedily, citing the case of four Thai men accused of plotting to kill Supreme Court President Praman Chansue (Thai: ประมาณ ชันซื่อ). The accused were present in court 461 times before 91 different judges since proceedings began in 1993 and ended in 2008. In actuality, Mr. Praman peacefully died of intrapulmonary infection in 2007.[3]

First set up in 1997, the Constitutional Court of Thailand was created solely as a high court to settle matters pertaining to the constitution. The court has since accumulated huge amounts of power and influence; gaining many controversies on the way. This has become especially clear during the 2006 and 2008 political crises, settling political deadlocks and social unrests.

Thailand's legal system blends principles of traditional Thai and Western laws; the western sourced laws are often misused and corrupted. The traditional 'Thai' laws are the product of Hindu-Brahmin laws used by the Khmer Empire. There is no discovery in the Thai legal system. Slander and libel are not civil torts in Thailand but criminal offenses.

Thailand’s legal system has been often criticized by other countries for having penalties of life in prison or even death for crimes such as drug possession or smuggling, while having lenient penalties for crimes such as terrorism and marital abuse resulting in spousal death.

The criminally accused are entitled to have a court-appointed certified translator present in court if they cannot afford one. Appeals must be filed with the trial court within thirty (30) days of the judge reading, signing and issuing the verdict. There are no juries in trials. Only Thai citizens can be admitted to the Bar and can practice before the courts. Attorneys must carry their current, yellow, bar card when in court and may be required to produce it on challenge.

In Thailand's southern border provinces, where Muslims constitute the majority of the population, Provincial Islamic Committees have limited jurisdiction over probate, family, marriage, and divorce cases.

Thailand is divided into seventy-six provinces (changwat, singular and plural). The Ministry of the Interior appoints governors for all but two provinces - the metropolis of greater Bangkok and the city of Pattaya, where the governor is popularly elected. Thailand's provinces are listed below. Note that each provincial capital takes the same name as the province.