The National Assembly of the Kingdom of Thailand is a bicameral legislature composed of a Senate and a House of Representatives. Combined, the Assembly has 650 members, 576 of which are elected (500 MPs and 76 Senators). Others include 74 non elected (74 Senators through party selection). The majority of elections in Thailand follows the First Past the Post system which is used in the elections for the 375 members of the House of Representatives and 76 members of the Senate. The remaining 125 members of the House are elected by party list proportional representation.

The upper house is called the Senate of Thailand (วุฒิสภา; RTGS: Wutthisapha). The chamber is non-partisan and has limited legislative powers. The Senate is made up of 76 elected members (one representing each province) and the rest (74) are selected from the following sectors: from the academic sector, the public sector, the private sector, the professional sector and other sectors, by the Senate Selection Committee. The senate's term lasts six years. It forbids members from holding any additional office or membership in political parties.[1]

The House of Representatives

The lower house is called the House of Representatives of Thailand (สภาผู้แทนราษฎร; RTGS: Sapha Phu Thaen Ratsadon). The chamber is made up of 375 members from single constituency elections and 125 members from "proportional representation" by party lists, as termed in the 2007 Constitution of Thailand. Thailand's "proportional representation" is parallel voting or Mixed Member Majoritarian (MMM). This is where the 125 seats are divided, to different political parties in accordance with the 'proportional representation' popular vote each party receives. Every eligible voter in Thailand in the event of a general election has two votes, the first for the constituency MP, the second for the party the voter prefers. The second category is then added and the results divided into 8 electoral areas. The other 375 seats are directly elected through a constituency basis. The House's term lasts four years, however, a dissolution can happen at any time.[2]

Elections in Thailand are held under universal suffrage, however some restrictions apply: The voter must be a national of Thailand; if not by birth then by being a citizen for 5 years, must be over 18 years old before the year the election is held and the voter must have also registered 90 days before the election at his constituency. Those barred from voting in House elections are: members of the sangha or clergy, those suspended from the privilege for various reasons, detainees under legal or court orders and being of unsound mind or of mental infirmity. Voting in Thailand is compulsory.[3] 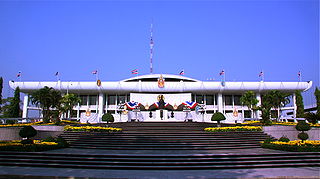 Parliament House of Thailand the meeting place for both the House and the Senate since 1974, currently there is a project to build a new, grander building.

Relationship with the Government Prime Minister Abhisit Vejjajiva and the Cabinet answers questions in the House of Representatives.

Apart from legislative and scrutiny functions, the National Assembly also has the power of appointment and removal. The House is given exclusive rights to elect the Prime Minister of Thailand, first the candidate must receive the support of one-fifth of all members, afterwards a simple majority vote will confirm his appointment which will be made officially by the King, the royal assent is then countersigned by the President of the National Assembly.[14]

The Senate is given exclusive powers to advise on the appointment of members of the judiciary and members of independent government organizations. These include the: Judges of the Constitutional Court of Thailand, members of the Election Commission, Members of the Counter Corruption Commission and the National Human Rights Commission.[15] However the power to appoint members of the State Audit Commission (including the Auditor General) belongs to the King, with only a counter signature of the President of the Senate.[16] Ananda Samakhom Throne Hall the old meeting place of the National Assembly, now only the State Opening is held there.

The two houses of the National Assembly have two different terms. In accordance with the constitution the Senate is elected to a six year term, while the House is elected to a four year term. Overall the term of the National Assembly is based on that of the House. The National Assembly each year will sit in two sessions an "ordinary session" and a "legislative session". The first session of the National Assembly must take place within thirty days after the general election of the House of Representatives. The first session must be opened by the King in person by reading a Speech from the Throne; this ceremony is held in the Ananda Samakhom Throne Hall. He may also appoint the Crown Prince or a representative to carry out this duty. It is also the duty of the King to prologue sessions through a Royal Decree when the House term expires. The King also has the prerogative to call extraordinary sessions and prolong sessions at his discretion.

The National Assembly may host a "Joint-sitting" of both Houses under several circumstances. These include: The appointment of a Regent, any alteration to the 1924 Palace Law of Succession, the opening of the first session, the announcement of policies by the Cabinet of Thailand, the approval of the declaration of war, the hearing of explanations and approval of a treaty and the amendment of the Constitution.

Members of the National Assembly enjoy parliamentary privilege which were enshrined in the constitution, these include: the "words expressed in giving statements of fact or opinions or in casting the vote" in a joint sitting of the National Assembly, No member of the House of Representatives or Senator shall, during a session, be arrested, detained or summoned by a warrant for an inquiry as the suspect in a criminal case unless permission of the House of which he or she is a member is obtained or he or she is arrested in flagrante delicto.

The two Houses also retain the privilege to decide its own rules and procedures, committees, quorum of committees, sittings, the submission and consideration of organic law bills and bills, the submission of motions, the consultation, debates, the passing of a resolution, the recording and disclosure of the passing of a resolution, the interpellation, the initiation of a general debate and committee members. Empty desks during a session.

From June 28, 1932 to 1974, the legislature met in the Ananda Samakhom Throne Hall. After the first elections to the National Assembly in 1933, King Prajadhipok officially gave the Throne Hall for the legislature's use. However through the years the composition of the Assemblies increased and the Throne Hall became too small to accommodate all the legislators and its secretariat. Three attempts were made to build a new building, however each failed because the government in power was terminated before a budget could be appropriated.

The fourth time however was a success with the help of King Bhumibol Adulyadej who appropriated to the National Assembly, royal land immediately north of the Throne Hall for the site of the new Parliament House. The construction began on the 5 November 1970, with a budget of 51,027,360 baht. The new Parliament House complex comprises three buildings:

On J29 uly 2008, the National Assembly appropriated new funds to construct a new and grander Parliament House. As of December 2008, a site belonging to the Royal Thai Army has been found but has not yet been confirmed. 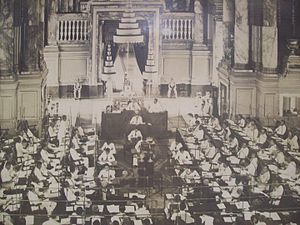 The People's Assembly of Thailand, meeting in the Ananda Samakhom Throne Hall, during the premiership of Luang Phibulsonggram.

Prior to 1932, the Kingdom of Siam did not possess a legislature, as all legislative powers were vested within the person of the monarch. This has been the case since the foundation of the Sukhothai Kingdom in the 12th century: as the King was seen as a “Dharmaraja” or “King who rules in accordance with Dharma” (the Buddhist law of righteousness). However on the 24 June 1932 a group of civilians and military officers, calling themselves the Khana Ratsadon (or People’s Party) carried out a bloodless revolution, in which the 150 years of absolute rule of the House of Chakri was ended. In its stead the group advocated a constitutional form of monarchy with an elected legislature.

The "Draft Constitution" of 1932 signed by King Prajadhipok, create Thailand’s first legislature, a People’s Assembly with 70 appointed members. The Assembly met for the first time on the 28 June 1932, in the Ananda Samakhom Throne Hall. The Khana Ratsadon decided that the people were not yet ready for an elected assembly, however they later changed their minds. By the time the "Permanent" Constitution came into force in December of that year, elections were scheduled for the 15 November 1933. The new constitution also changed the composition of the Assembly to 78 directly elected and 78 appointed (by the Khana Ratsadon) together compromising 156 members.

After the Second World War a new constitution was promulgated in 1946 under the government of Pridi Panomyong. The constitution is considered Thailand’s most democratic and created for the first time a bicameral legislature: the Senate and the House of Representatives. Also for the first and last time the constitution called for a fully elected Senate (albeit indirectly) and House, the Senate to 6 years term and the House to 4 years. The ban on political parties were lifted and the first full elections were held in 1946. However in 1947 a coup d’etat executed by the military, abrogated the constitution and replaced it with the 1947 ‘temporary’ and then a ‘permanent’ charter in 1949. The new constitution retained the House but created a 100 member Senate directly appointed by the King.

This charter lasted until 1957 when the military again carried out a coup d’etat and created a single 123 member appointed National Assembly, 103 of which were from the military or police. In 1959 Field Marshal Sarit Dhanarajata carried out another coup d’etat this time abolishing the National Assembly altogether. In 1969 under Thanom Kittikachorn the National Assembly returned; this time with a 219 member House and again a royally appointed Senate. This lasted until 1972 when Thanom overthrew his own government and ruled the country through a National Executive Council. Under pressure Thanom reinstated a 299 appointed National Legislative Assembly, 200 of which were members of the military.

In 1974 the rule of the 'Three Tyrants’ (as Thanom’s tenure became known) was finally overthrown. A new constitution was promulgated, this time swinging the power back to the legislature by creating a bicameral legislature with an elected House and a House-appointed Senate. Within two years the military led by Tanin Kraivixien again abrogated the constitution and installed a royally-appointed 360 member unicameral National Assembly.

By 1978, Kriangsak Chomanan (who succeeded Tanin in 1977) restored the bicameral legislature with an elected 301 member House and a Prime Ministerially-appointed 225 Senate. This arrangement lasted for almost 13 years until Army Commander General Suchinda Kraprayoon overthrew the government of Chatichai Choonhavan in 1991 and returned the unicameral appointed National Assembly with 292 members. However Suchinda’s rule was brought down by the Black May uprising, which led to the overthrow of the military and the drafting of a new constitution.

The Constitution of 1997 or the People’s Constitution returned Thailand to democracy with a National Assembly composed of an elected 500 (400 directly, 100 by party-lists) House of Representatives, and an elected 200 member Senate, this arrangement lasted for almost ten years. The constitution was abrogated following the 2006 Coup d’etat, by the military under General Sonthi Boonyaratglin. In 2007 the military appointed National Legislative Assembly to draft the new constitution. This copy was eventually adopted after it was approved through a referendum in 2007, this is the constitution currently in use.