expeditionary force in Libya and Tunisia during the North African Campaign of World War II. The reputation of the Afrika Korps is synonymous with that of its first commander Erwin Rommel, who later commanded the [1] Panzer Army Africa which evolved into the German-Italian Panzer Army (Deutsch-Italienische Panzerarmee) and Army Group Africa, all of which Afrika Korps was a distinct and principal component. Throughout the North African campaign, the Afrika Korps fought against Allied forces until its surrender in May 1943.

The Afrika Korps was derived and formed upon Adolf Hitler's personal choice of Erwin Rommel to its command on 12 February 1941 (Rommel himself landed on African soil in Libya on 14 February 1941 to begin leading his forces that would be brought into action). 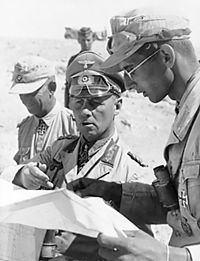 The German Armed Forces High Command (Oberkommando der Wehrmacht, OKW) and Army High Command or (Oberkommando des Heeres, OKH) had decided to send a "blocking force" (Sperrverband) to Libya to support the Italian army. The Italian army group had been routed by Commonwealth Force's counter-offensive led by the British Eighth Army, in Operation Compass. The German "blocking force", commanded by Rommel, at first consisted of only the 5./leichte "Afrika" Panzer Regiment, which was quickly cobbled together from the second regiment of the 3./Panzer Division and various other small units attached for water treatment and medical care. These elements were organized into the 5th Light Division when they arrived in Africa from 10 February – 12 March 1941. In late April and into May, the 5th Light Division was joined by transference of the various elements constituting the 15th Panzer Division from Italy, though it did not completely arrive until after Rommel had made a counter-offensive and re-taken most of Cyrenaica and then subsequently gone back over to the defensive. At this time, the Afrikakorps consisted of the two divisions plus various smaller supporting units, and was officially subordinated to the Italian chain of command in Africa (though Rommel had conducted his offensive without any authorization).

After the defeat at El Alamein and the Allied invasion in Morocco and Algeria Operation Torch, the OKW once more upgraded its presence in Africa by creating the XC Army Corps in Tunisia on 19 November 1942, and then creating a new 5th Panzer Army headquarters there as well on 8 December, under the command of Colonel-General Hans-Jürgen von Arnim.

On February 23, 1943, Panzer Army Africa—now called the German-Italian Panzer Army—was redesignated as the Italian 1st Army and put under the command of Italian general Giovanni Messe, while Rommel was placed in command of a new Army Group Africa (Heeresgruppe Afrika), created to control both the Italian 1st Army and the 5th Panzer Army. The remnants of the Afrikakorps and other surviving units of the 1st Italian Army retreated into Tunisia. Command of the Army Group was turned over to von Arnim in March. On 13 May, remnants of the Afrikakorps surrendered, along with all other remaining Axis forces in North Africa. 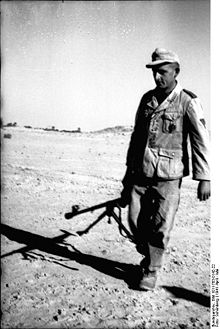 "Afrika Korps" is derived from the original German name properly written as one word. Strictly speaking, the term refers to the original formation which, although not dissolved, became part of the ever-expanding German and Italian presence in North Africa for its February 1941–May 1943 role in the North African Campaign. However, it is sometimes used by the news media and veteran Allied soldiers as a name for all the German units in North Africa. Some notable attached units include the 15th Panzer Division, 21st Panzer Division, Afrika zbV (zur besonderen Verwendung, "special purpose") Division, which was created as an infantry division and slowly upgraded to a fully motorized division, and then redesignated as the 90th Light Afrika Division; the 164th Light Afrika Division, the 999 Light "Afrika" Division, also the 334th Infantry division; and the Luftwaffenjäger-Brigade 1 or Fallschirmjäger-Ramcke Brigade Ramcke Parachute Brigade (named after its commander Hermann-Bernhard Ramcke). There were also eight Italian divisions (out of the 10 Italian Divisions in North Africa) under Rommel's command in Panzer Army Afrika, including two armored divisions, two motorized divisions, three infantry divisions, and the Folgore parachute division. The army was supported by a number of smaller units from both the German and Italian armed forces.

The designation "Light" (German: Leicht) did not refer to a standardized table of organization and equipment (TOE) for the various German divisions that bore that designation.

German unit organizations were based on tables of organization, (Kriegsstärkenachweisungen, or KStN). Every unit in the German Army raised had one, and all orders raising units indicated the corresponding KStN number and date which applied to them. For instance, the 5./leichte "Afrika" or 5th Light "Africa" had an organizational structure that was missing specific elements to make it a complete Panzer "Division", as did its late April to May 1941 arriving "full complement" partner division in Africa, the 15./Panzer Division. The 5./le. "Africa" Division eventually became at least partially expanded into the 21./PD or 21st Panzer Division. It was given German unit elements that were already on the ground in North Africa and some replacement equipment to meet the prescribed full Panzer Division KStN constraints (except for the Motorcycle Battalion component, which was never complete) and then renamed in August 1941. As the entire Afrikakorps organization was restructured and even renamed in August 1941, the nomenclature of Afrikakorps lasted less than six months. The famous force, with the short-lived name Afrikakorps, became a major German component of Panzer Army Africa; Panzerarmee Afrika, which evolved into the German-Italian Panzer Army (Deutsch-Italienische Panzerarmee) and then to Army Group Africa (Heeresgruppe Afrika) in the 27 months of the campaign for this force.[citation needed]

Additional German forces were sent to Africa and became components of the Panzer Army Africa, Panzerarmee Afrika. Examples such as the 164./le. "Africa" or 164th Light Afrika Division was at first only a partially-motorized infantry division, and actually never had any tanks at all, only armored cars and reconnaissance vehicles. Various German divisions in Africa occasionally reorganized or re-equipped without a change of name, or conversely were redesignated with a new name without any substantial reorganization. None of the German Armies actually fielded for service in North Africa completely met the service KStNs directed for their completion because of battle losses, sinkings across the Mediterranenan while in transit and the tremendous wear on the vehicles.

Luftwaffe Fallschirmjäger (paratroopers) from FJR3 and FJR5 of the Hermann Göring Panzer Division, plus ground and mechanized forces were sent to Tunisia beginning in mid-November 1942 and through to major components into March 1943. Over 5,000 from this force were buried in the Cape Bon Peninsula, Tunisia.

The Luftwaffenjäger-Brigade 1, known more commonly as the Ramcke Parachute Brigade, worked alongside the Afrika Korps after Operation Hercules (the planned invasion of Malta) was cancelled and the Brigade was subsequently re-deployed to Germany.

Thousands of Korps POWs were held in camps at Camp Shelby in Mississippi after their capture.[2]

Certain divisions were resurrected in Europe after the cessation of fighting in Tunisia: 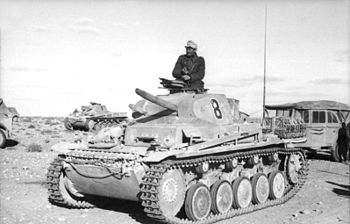 A Panzer II of the Afrika Korps. Note the faded insignia on the front, left of the handle and just below the turret.

The sun shines hot over African ground.
Our panzer engines are singing their song!
German panzers in the blazing sun,
As they stand ready for battle against England.
The tracks rattle, the engine roars,
Panzers rolling forwards in Africa.

We are the German Africa Korps
The Führer's daring troops
We attack like the Devil
Make things hot for the Tommys
We fear neither heat nor desert sand
We brave the thirst and the blazing sun
Marching to the beat of our drum
Forwards, forwards
|:Forwards with our Rommel!:|

The British fear us like the plague
They're like cats on a hot tin roof
We're taking revenge for German East (Africa) and for South-West (Africa)
Which were cowardly stolen from us
Churchill and Roosevelt are getting mad
We beat the enemy in every country
The drum beats 'get ready'[Note 1]
Forwards, forwards
|:Forwards with our Rommel!:|

With us united in battle and in victory
Italy's cohorts are marching
Until one day the sun of peace will shine on us
And we will return to Germany.
But if the enemy's bullet gets me
Then let me rest in the desert sand
Let the drum beat once more.
Forwards, forwards
|:Forwards with our Rommel!:|