German South West Africa (German: Deutsch-Südwestafrika, DSWA) was a colony of Germany from 1884 until 1915, when it was taken over by South Africa (as part of the British Empire) and administered as South West Africa, finally becoming Namibia in 1990. With an area of 835,100 km², it was easily one and a half times the size of the mainland German Empire in Europe (without its colonies) at the time.

Initial European contact with the areas which would become German South-West Africa came from traders and sailors, starting in January 1486 when Diogo Cão, possibly accompanied by Martin Behaim, landed in what would become Namibia. However, for several centuries, European settlement would remain small and temporary. In February 1805 the London Missionary Society established a small mission in Blydeverwacht. The efforts of this group met with little success. In 1840 the London Missionary Society transferred all of its activities to the Rhenish Missionary Society. Some of the first representatives of this organization were Franz Heinrich Kleinschmidt who arrived in October 1842 and Carl Hugo Hahn, arrived in December 1842. They began founding churches throughout what would become Namibia. The Rhenish missionaries had a significant impact initially on culture and dress, and then later on politics. During the same time that the Rhenish missionaries were active, merchants and farmers were establishing outposts.

On 16 November 1882 a merchant from Bremen, German Empire, Adolf Lüderitz, requested protection for a station that he planned to build in South-West Africa, from Chancellor Bismarck. Once this was granted, his employee Heinrich Vogelsang purchased land from a native chief and established a city at Angra Pequena which was renamed Lüderitz. On 24 April 1884, he placed the area under the protection of Imperial Germany to deter British encroachment. In early 1884, the Kaiserliche Marine ship Nautilus visited to review the situation. A favourable report from the government, and acquiescence from the British, resulted in a visit from the Leipzig and Elisabeth. The German flag was finally raised in South West Africa on 7 August 1884. The German claims on this land were confirmed during the Conference of Berlin. In fact, the indigenous peoples never held the idea of individually held land as "private property": land could never be alienated by any individual, no matter what his rank. All German land claims were fraudulent. In October, the newly-appointed Commissioner for West Africa, Gustav Nachtigal, arrived on the Möwe.[1]

In April 1885, the Deutsche Kolonialgesellschaft für Südwest-Afrika (German Colonial Society for Southwest Africa, known as DKGSWA) was founded with the support of German bankers (Gerson von Bleichröder, Adolph von Hansemann), industrialists (Count Guido Henckel von Donnersmarck) and politicians (Frankfurt mayor Johannes von Miquel). DKGSWA was granted monopoly rights to expolit mineral deposits.[2] The new Society soon bought the assets of Lüderitz's failing enterprises. Later, in 1908, diamonds were discovered. Thus along with gold, copper, platinum, and other minerals, diamonds became a major investment. Earlier, the colonial aim was to dispossess the indigenous peoples of their land, for use of German settlers, as well as be a source of raw materials and a market of German industrial products. [2]

Lüderitz drowned in 1886 while on an expedition to the Orange River. The company bought all of Lüderitz’ land and mining rights, following Bismarck's policy that private rather than public money should be used to develop the colonies. In May, Heinrich Ernst Göring was appointed Commissioner and established his administration at Otjimbingwe. Then, on April 17, 1886, a law creating the legal system of the colony was passed, creating a dual system with laws for Europeans and different laws for natives.[3] 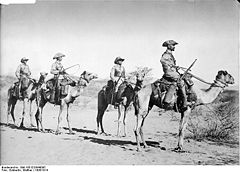 Four German soldiers in a Camel-Schutztruppe patrol, in 1906.

Over the next several years relations between the Germans and indigenous peoples continued to worsen. Additionally, the British settlement at Walvis Bay as well as numerous small farmers and missionaries were all involved in the area. A complex web of treaties, agreements and vendettas increased the unrest in the area. In 1888 the first group of Schutztruppen—colonial protectorate troops—arrived (they were sent secretly) to protect the base at Otjimbingwe. The Schutztruppe detachment consisted of two officers, five non-commissioned officers, and 20 black soldiers.

By the end of the year, the German commissioner Heinrich Ernst Göring was forced to flee to Walvis Bay after negotiations failed with a local tribe. Also, by the late 1880s, the South West Africa Company was nearly bankrupt and had to ask Bismarck for help and additional troops. By 1890 the colony was declared a Crown Colony and additional troops were sent to the area.[4] At the same time the colony grew through the acquisition of the Caprivi Strip in the northeast, which promised new trade routes. This territory was acquired through the Heligoland-Zanzibar Treaty between Britain and Germany.[5]

German South-West Africa was the only German colony where Germans settled in large numbers. German settlers were drawn to the colony by economic possibilities in diamond and copper mining, and especially farming. In 1902 the colony had 200,000 inhabitants, though only 2,595 were German, 1,354 were Afrikaner, and 452 were British. By 1914, 9,000 more German settlers had arrived. There were probably around 80,000 Herero, 60,000 Ovambo, and 10,000 Nama, who were disparagingly referred to as Hottentots. 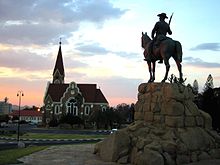 The "Christuskirche" and the "Südwest Reiter" in Windhoek 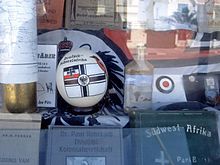 Through 1893 and 1894, the first "Hottentot Uprising" of the Nama and their legendary leader Hendrik Witbooi occurred. The following years saw many further local uprisings against German rule. Before the Herero and Namaqua Genocide of 1904-1907, the Herero and Nama had good reasons to distrust the Germans. This is discussed in Khaua-Mbandjeru Rebellion. This rebellion, in which the Germans tried to control the Khaua by seizing their property by artificially imposing European legal views of property ownership, led to the largest of the rebellions, known as the Herero Wars (or Herero Genocide) of 1904.

Remote farms were attacked, and approximately 150 German settlers were killed. The Schutztruppe of only 766 troops and native auxiliary forces was, at first, no match for the Herero. The Herero went on the offensive, sometimes surrounding Okahandja and Windhoek, and destroying the railway bridge to Osona. Additional 14,000 troops, hastened from Germany under Lieutenant General Lothar von Trotha, crushed the rebellion in the Battle of Waterberg.

Earlier von Trotha issued an ultimatum to the Herero people, denying them the right of being German subjects and ordering them to leave the country, or be killed. In order to escape, the Herero retreated into the waterless Omaheke region, a western arm of the Kalahari Desert, where many of them died of thirst. The German forces guarded every water source and were given orders to shoot any adult male Herero on sight. Only a few Herero managed to escape into neighbouring British territories.[6]

The German official military report on the campaign lauded the tactics:

This bold enterprise shows up in the most brilliant light the ruthless energy of the German command in pursuing their beaten enemy. No pains, no sacrifices were spared in eliminating the last remnants of enemy resistance. Like a wounded beast the enemy was tracked down from one water-hole to the next, until finally he became the victim of his own environment. The arid Omaheke [desert] was to complete what the German army had begun: the extermination of the Herero nation.

In late 1904, the Nama entered the struggles against the colonial power under their leaders Hendrik Witbooi and Jakobus Morenga, the latter often referred to as "the black Napoleon". This uprising was finally quashed during 1907 – 1908 In total, between 25,000 and 100,000 Herero, more than 10,000 Nama and 1,749 Germans died in the conflict.

After the official end of the conflict, the remaining natives, when finally released from detention, were subject to a policy of dispossession, deportation, forced labor, and racial segregation and discrimination in a system that in many ways anticipated apartheid and even perhaps foreshadowed the industrial-scale killing in Nazi Germany. The genocide remains relevant to ethnic identity in independent Namibia and to relations with Germany.[7] 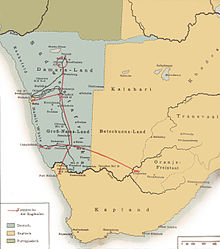 During World War I, South African troops opened hostilities with an assault on the Ramansdrift police station on 13 September 1914. German settlers were transported to prison camps near Pretoria and later in Pietermaritzburg. Because of the overwhelming superiority of the South African troops, the German Schutztruppe, along with groups of Afrikaner volunteers fighting in the Maritz Rebellion on the German side, offered opposition only as a delaying tactic. On 9 July 1915, Victor Franke, the last commander of the Schutztruppe, capitulated near Khorab.

After the war, the territory came under the control of Britain, and then was made a South African League of Nations mandate. In 1990, the former colony became independent as Namibia, governed by the former liberation movement SWAPO.

Many German names, buildings, and businesses still exist in the country, and about 30,000 people of German descent still live there. German is still widely used in Namibia, with the Namibian Broadcasting Corporation operating a German language radio station, while the daily newspaper Allgemeine Zeitung, founded in 1916, remains in publication.