Leopard 2A5 of the German Army

A Panzer (English pronunciation: /ˈpænzər/) is a German language word that, when used as a noun, means "tank". When it is used as an adjective, it means either tank (e.g. "panzer battle") or "armoured" (e.g. panzer division).[1]

Panzer is a loanword from the German Panzer (German pronunciation: [ˈpantsɐ] (

listen)), meaning "armour". It is also used in the compounds Panzerdivision, ‘panzer division’ and dated Panzerkampfwagen, ‘tank’ or literally ‘armoured combat vehicle’ (the modern synonym is Kampfpanzer, or just Panzer).

The German word Panzer refers to any kind of body armour, as in Plattenpanzer, ‘plate armour’, Kettenpanzer, ‘mail’, or generally gepanzert, ‘armoured’. The word also refers to an animal's protective shell or thick hide, as in Schildkrötenpanzer, ‘turtle shell'. It derives through the French pancier, ‘breastplate’, from Latin pantex, ‘belly, paunch’,[2] and is possibly related to panus, ‘swelling’.[3]

A good example for the use of the word "Panzer" in German is the Indian Rhinoceros or Panzernashorn, whose appearance resembles an armoured mediaeval knight.

The word has been calqued in many other languages, such as Swedish pansarvagn or Finnish panssarivaunu, ‘tracked armoured fighting vehicle’, Danish and Norwegian panservogn, ‘armoured vehicle’, but kampvogn means ‘tank’. Due to the similarities of the words, Panzer is commonly, and erroneously, confused with the German Panther tank. 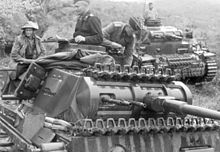 Two Panzer IIIs during the Battle of Greece, April 1941.

Although the post-World War I Treaty of Versailles greatly restricted its military development, Germany started to secretly develop armoured tactics in the 1920s, in cooperation with the Soviet Union (while assisting in the establishment of a Soviet tank-building industry). In the 1930s, the light Panzer I and Panzer II tanks were built primarily for training, and tested in battle during the Spanish Civil War.

At the beginning of the Second World War, German forces gained notoriety for the rapid and successful invasions of Poland, the Netherlands, Belgium and France, and the Soviet Union, in 1939–41. Although the early-war Panzer II, III, and IV were in some respects inferior to some of their French and Soviet counterparts, this blitzkrieg (‘lightning warfare’) was made possible by several factors: the German military experience in World War I, their level of training, integrated communications, coordinated use of airpower, and, perhaps most famously, by the combined-arms employment of integrated infantry and armoured forces, the panzer divisions of the Germany Army.[4]

As the blitzkrieg began to stall on the Eastern Front, and a mobile war pushed back and forth across North Africa, Germany was quickly forced into an arms race in armour and antitank weapons. 88 mm antiaircraft guns were used as antitank weapons, thousands of captured antitank guns were marshaled into German service as the 7.62 cm PaK 36(r), new inexpensive tank destroyers such as the Marder series were put into production, while Panzer III & IV tanks & the Sturmgeschütz were hastily up-armoured and up-gunned.

A new generation of big tanks, the heavy Tiger, Panther, and King Tiger tanks were developed and rushed into the battlefield. During the war, the mass of a panzer increased from the 5.4 tonnes of a pre-war Panzer I light tank, to the 68.5 tonnes of the Tiger II. In the meantime, the Soviets continued to produce the medium-sized T-34 by the tens of thousands as well as introducing the heavy Iosef Stalin (IS series) tanks, and U.S. industry nearly matched them in the number of M4 Sherman tanks built and deployed in Europe after D-Day.

Throughout the war, the panzer was a key piece of the combined arms doctrines supporting the German blitzkrieg. The tanks were used in almost every theatre of German involvement. Their largest engagement occurred at the Battle of Prokhorovka, which saw about three hundred panzers pitted against five hundred Soviet tanks.