Onassis was born in Karatass, a suburb of Smyrna (now İzmir, Turkey) to Socrates and Penelope Onassis (née Dologu). Onassis had one full-sister, Artemis, and two half-sisters, Kalliroi and Merope, by his father's second marriage following Penelope's death. Socrates Onassis came from the village of Moutalasski (now named Talas), near Cappadocia in Asia Minor, which is the present-day Kayseri province, in central Turkey.[citation needed] A successful shipping entrepreneur, he was able to send his children to prestigious schools. At the age of 16, Aristotle Onassis spoke four languages: Greek (his native language), Turkish, Spanish, and English,[3] when he graduated from the local Evangelical Greek School .[4]

After being briefly administered by Greece (1919–1922) in the aftermath of the allied victory in World War I, Smyrna was re-taken by Turkey and the Onassis family's substantial property holdings were lost, causing them to become refugees fleeing to Greece after the Great Fire of Smyrna.[5] During this period Aristotle Onassis lost three uncles, an aunt and her husband Chrysostomos Konialidis and their daughter, who were burned to death on fire in a church in Thyatira where 500 Christians were seeking shelter from the Great Fire of Smyrna.

In 1923, Aristotle Onassis left for Buenos Aires, Argentina by Nansen passport and got his first job with the British United River Plate Telephone Company.[citation needed]

Onassis imported tobacco from Turkey with help from his father. The tobacco was softer than the Cuban variety, and he was sure it would appeal to women more. After the failure of a contract with Juan Gaona, the director of a major Argentine company, Onassis turned to making his own cigarettes. After some time managing this business and holding a job with British United River, he made a considerable amount of money. His power and influence increased rapidly; he frequently attended important social events, and in 1925 he received both Argentine and Greek citizenship. According to Peter Evans and Christian Cafarakis (a former employee)[6] a considerable part of the tobacco was smuggled, helping him to rapidly accrue his first million dollars. In 1928, Onassis traded with Greece to the value of US$2,800,000 just four years after his arrival in Argentina.[citation needed] This was due in part to other illegitimate activities such as sabotaging his competitors and fraudulently using the name of a famous cigarette company: Bis. This last enterprise was profitable but ended when the real Bis company sued him.[7]

The 1000% increase in tax on imported products from countries with no Greek trade agreement, announced in 1929, threatened Onassis' South American business. Argentina had few commercial relationships with Greece. With the help of his confidante, Costa Gratsos, Onassis corresponded the prime minister of Greece Eleutherios Venizelos and met with the foreign minister Andreas Michalakopoulos to discuss the tax position, finally winning support with the help of extensive bribes.[8] In 1931, again with Michalakopoulos' help, Onassis was granted tax exemptions for his freight ships and the title of Vice Consul.[8] This position greatly increased the status of Onassis as well as his business. The biographer Evans states that Onassis exchanged vast sums of Greek currency on the black market, in spite of Gratsos' disapproval.[8]

In 1954, the FBI investigated Onassis for fraud against the U.S. government.[citation needed] He was charged with violating the citizenship provision of the shipping laws which require that all ships displaying the U.S. flag be owned by U.S. citizens. Onassis entered a guilty plea and paid $7 million.[citation needed]

Onassis founded Olympic Airways (today Olympic Air), the Greek national carrier, in 1957. To finance his ships he used a method that he, in his own words, described as utilizing OPM ('Other People's Money').[citation needed] He contracted to transport ore in ships he did not yet have, and closed several contracts to transport oil with tankers that had not yet been built.[citation needed] Onassis made large profits when the big oil companies like Mobil, Socony, and Texaco signed long-term contracts at fixed prices with him for the use of his fleet, while having trouble managing their own fleet which operated under US flags and thus at high cost. Onassis' fleet had Panamanian flags and sailed tax-free while operating at low cost. Because of this, Onassis could turn a profit in every transaction, even though he charged one of the lowest prices in the merchant navy market. He could recoup the cost of a tanker with a six-month contract.[citation needed] The rest of the service life of the tanker, usually 20 years, yielded high profits.[citation needed]

Onassis' owned a fleet of freighters and tankers that exceeded the seventy vessels. Stocks accounted for one-third of his capital, held in oil companies in the USA, the Middle East, and Venezuela. He also owned additional shares that secured his control of ninety-five multinational businesses on five continents. He owned gold processing plants in Argentina and Uruguay and a large share in an airline in Latin America and $4 million dollars worth of investments in Brazil. Also, he owned companies like Olympic Maritime and Olympic Tourist, a chemical company in Persia, apartments in Paris, London, Monte Carlo, Athens, Acapulco, a castle in South France, the Olympic Tower, a fifty-two story high-rise in Manhattan, another building in Sutton Place, Olympic Airways and Air Navigation, the islands Scorpios and Sparta, the yacht "Christina" and, finally, deposit accounts and accounts in treasuries in two hundred and seventeen banks in the whole world.[9]

Between 1950 and 1956, Onassis had success whale hunting off the Peruvian coast. His first expedition made a net profit of US$4.5 million. That business ended when the Norwegian Whales Gazette made accusations based on sailors' testimonials, such as one given by Bruno Schalaghecke who worked on the whaler Olympic Challenger: "Pieces of fresh meat from the 124 whales we killed yesterday still remains on the deck. Among them all, just one could be considered adult. All animals that pass within the range of the harpoon are killed in cold blood".[8] The venture came to an end after the business was sold to Kyokuyo Hogei Kaisha Whaling Company, one of the biggest Japanese whaling companies, for $8.5 million

According to the Evans biography, four days after his marriage with Jacqueline, Onassis was in close discussions with Colonel George Papadopoulos, who Evans states was on Onassis' extensive bribery list.[10] Onassis and Papadopoulos were planning what they referred to as the "greatest business" in Greece. This project involved building an oil refinery, shipyards, power plants, and several aluminum facilities. The project was officially named the Omega Project. The project was heavily criticized by people such as Helen Vlachos, a journalist from Athens.[10]

The Omega Project negotiations with the Papadopoulos government ended with Onassis losing part of the project to his competitor Stavros Niarchos.[10] The failure was due partly to opposition from influential people within the military junta, such as Ioannis-Orlandos Rodinos, Deputy Minister of the National Economy, who opposed Onassis' offers in preference to Niarchos.[10]

Onassis's world-famous yacht Christina together with its tender, a classic Hacker-Craft.

To Onassis his marriage to Athina was more than the fulfillment of his ambitions. He also felt that the marriage dealt a blow to his father in law and the old-money Greek traditionalists who held Onassis in very low esteem.[11] She divorced him when she discovered her husband having sex in the saloon of her daughter's namesake yacht, the Christina, with the opera singer Maria Callas. 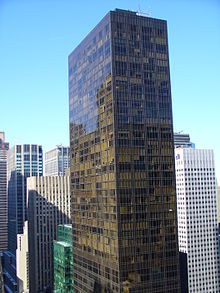 Onassis financed the construction of the Olympic Tower in New York.

Despite the fact they were both married, Onassis and opera diva Maria Callas embarked on an affair. They had met in 1957 during a party in Venice promoted by Elsa Maxwell. After this first encounter, Onassis commented to Spyros Skouras: "There [was] just a natural curiosity; after all, we were the most famous Greeks alive in the world".[7]

According to Peter Evans, Onassis offered Mrs. Kennedy US$3 million for herself and $1m for each son in return for marriage. After Onassis' death she would receive US$150,000 each year for the rest of her life. The whole marital contract was discussed with Ted Kennedy and later reviewed by André Meyer, her financial consultant.

Onassis' daughter Christina made clear that she did not like Jacqueline Kennedy, and after Alexander's death, she convinced Onassis that Jacqueline had some kind of curse due to John and Robert Kennedy's murders. The already strained relationship between Aristotle and Jacqueline soon came to an end.[12]

During their marriage, the couple resided in a home they rented in Bernardsville, New Jersey.[13]

Onassis died at age 69, on March 15, 1975 at the American Hospital of Paris in Neuilly-sur-Seine, France, of respiratory failure, a complication of the myasthenia gravis that he had been suffering from during the last years of his life.[14] According to his will, his daughter Christina was to inherit 55% of the Onassis fortune while the other 45% were used as funds for the Alexander S. Onassis Foundation set up to honor his son Alexander Onassis.[citation needed] This 45% was the share that his son Alexander would have inherited, had he not died in 1973. Jackie Kennedy also received her share of the estate settling for a reported $10,000,000 ($26 million according to other sources) which was negotiated by her brother-in-law Ted Kennedy (this amount would later grow to several hundred million under the financial stewardship of her companion Maurice Tempelsman).[citation needed] Christina's share has since passed to her only child Athina, making her one of the wealthiest women in the world.[citation needed]