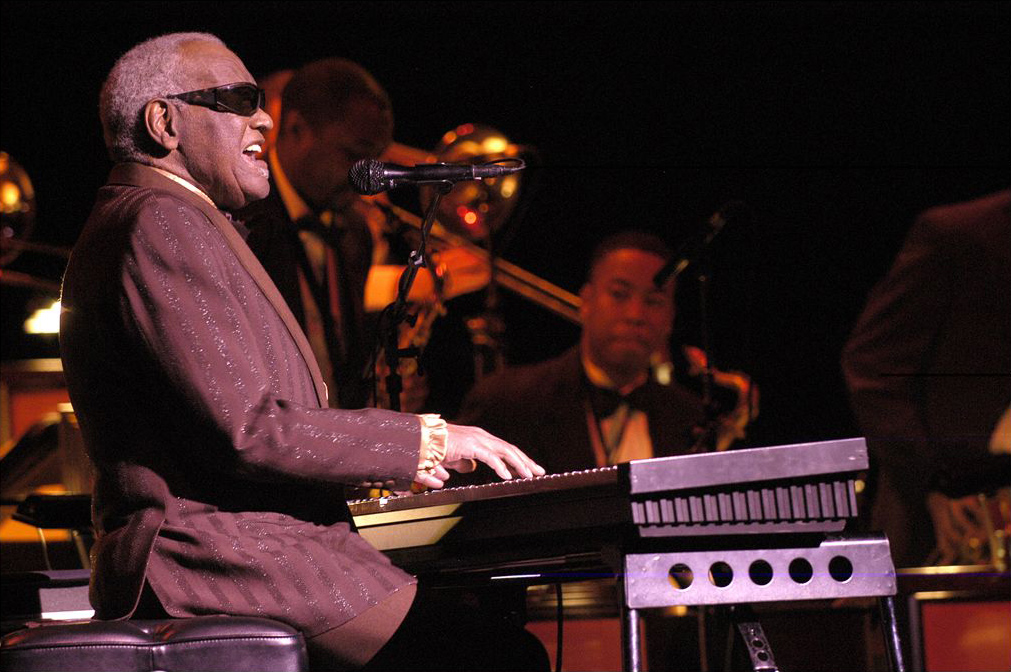 Ray Charles Robinson (, – , ), known by his Ray Charles, was an American and , who shaped the sound of . He brought a soulful sound to , s, and a rendition of "" that of "" called the "definitive version of the song, an American anthem &mdash; a classic, just as the man who sung it."

Ray Charles began to go blind when he was five. He became totally blind by the age of seven.

Before he left school, Charles began working as a musician in many bands that played in various styles, including and, in “with a band called The Florida Playboys." This is where Charles began his reputation of always wearing sunglasses. [ [http://www.black-network.com/charlesbio.htm blacknetwork.com] Ray Charles on Ray]

Almost immediately after signing with Atlantic, Charles scored his first hit singles with the label with "" and the Ertegun-composed "", both making the charts in 1953. But it was Charles' "" (composed with band mate Renald Richard [ [http://allmusic.cam/cg/amg.dll?p=amg&sql=33:hvfexxq0ldse allmusic ] ] ) that brought the musician to national prominence.

The song reached the top of 's R&B singles chart in 1955 and from there until 1959, Charles would have a series of R&B chart-toppers including "", "", "Mary Ann", "" and "The Night Time (Is the Right Time)", which were compiled on his Atlantic releases "Hallelujah, I Love Her So", "", and "". During this time of transition, he recruited a young girl group from Philadelphia named the Cookies as his background singing group, recording with them in New York and changing their name to the in the process. Former record producer often wrote letters to telling them that he should do a duet.

In 1959, Charles crossed over to top 40 radio with the release of his impromptu number, "What'd I Say", which was initially conceived while Charles was in concert. The song would reach number 1 on the R&B list and would become Charles' first top ten single on the pop charts, peaking at number 6. Charles would also record "", before leaving Atlantic for a more lucrative deal with in 1959.

In 1965, Charles was arrested for possession of , a drug to which he had been addicted for nearly 20 years.

In the late 1980s a number of events increased Charles' recognition among young audiences. He made a cameo appearance in the popular 1980 film "The Blues Brothers". In 1985, "The Right Time" was featured in the episode "Happy Anniversary" of "" on . In a Pepsi Cola commercial of the early 1990s, Charles popularized the "!"

In 1989, Charles recorded a cover version of the Japanese band ' song "Itoshi no Ellie" as "Ellie My Love" for a TV advertisement, reaching #3 on Japan's chart.

In the late '80s and early '90s, Charles made appearances on "The Super Dave Osbourne Show", where he performed and appeared in a few vignettes where he was somehow driving a car, often as Super Dave's chauffeur. At the height of his newfound fame in the early nineties, Charles did guest vocals for quite a few projects. He also appeared (with ) on long time friend ' hit "" in 1990, from Jones' album "".

Following 's death in 1990, Ray Charles appeared in the one-hour CBS tribute, "The Muppets Celebrate Jim Henson". He gave a short speech about the deceased, stating that Henson "took a simple song and a piece of felt and turned it into a moment of great power". Charles was referring to the song "It's Not Easy Being Green", which Charles later performed with the rest of the Muppet cast in a tribute to Henson's legacy.

During the sixth season of "", Ray Charles vocally performed "", rather than the song being rendered by other musicians without lyrics as in the previous five seasons.

In 2000, Charles made a special guest appearance on Big Musical Movie as a fictional character named G-Clef. also made a guest appearance as his companions. Charles recorded "There It Is" during and after filming with and Traci Paige Johnson. After recording, Charles commented "This has been the most fun I have had since I met President Reagan in '84."

In 2002 Charles headlined during the Blues Passions Cognac festival in southern .

In 2002 he took part with other musicians in a peace concert in , which was the first event to take place inside the city’s ancient since A.D. 404. The event was organized in partnership with the and the Listen Up Foundation.

In June, 2003, Ray Charles presented one of his greatest admirers, , with his award upon being inducted in the and the two sang Morrison's song from the "" album, "". This performance is captured on Morrison's 2007 album, "".

On Friday, April 11th 2003, Ray Charles sang 'America The Beautiful' at Fenway Park in Boston, Friday, prior to the rained out Red Sox home opener against the Baltimore Orioles.

In 2003 Charles performed "Georgia On My Mind" and "America the Beautiful" at a televised annual electronic media journalist banquet held in , at what may have been his final performance in public. Ray Charles' final public appearance came on , , at the dedication of his music as a in the city of Los Angeles.

He died on , of hepatocellular carcinoma (liver cancer) at his home in Beverly Hills, , surrounded by family and friends. His body was interred in the in Inglewood, .

His final album, "", released two months after his death, consists of duets with various admirers and contemporaries: , , , , , Michael McDonald, , , , , , and . The album won eight , including five for Ray Charles for Best Pop Vocal Album, Album of the Year, Record of the Year and Best Pop Collaboration with Vocals for "Here We Go Again" with , and Best Gospel Performance for "Heaven Help Us All" with ; he also received nods for his duets with Elton John and B.B. King.

Two more posthumous albums, "" (2005) and "Ray Sings, Basie Swings" (2006), were released. "" consisted of duets recorded from 1997-2005 with artists were personally chosen by Ray Charles. "Ray Sings, Basie Swings" consists of archived vocals of Ray Charles from a live 1973 performance added to 's music. Charles' vocals recorded from the concert mixing board were added to a new accompaniment by the Orchestra (among others). Gregg Field, who had performed as a drummer with both Charles and Basie, produced this album. and his T.V. show on fox television

Despite his support of in the 1960s and his support for the American Civil Rights Movement, Charles courted controversy when he toured in 1981, during an international boycott of the country because of its policy.

Charles was married twice and fathered 12 children by 7 different women.

Charles was significantly involved in the biopic "Ray", an October 2004 film which portrays his life and career between 1930 and 1966 and stars as Charles. Foxx won the 2005 Academy Award for for the role.

Before shooting could begin, however, director brought Foxx to meet Charles, who insisted that they sit down at two pianos and play together. For two hours, Charles challenged Foxx, who revealed the depth of his talent, and finally, Charles stood up, hugged Foxx, and gave his blessing, proclaiming, "He's the one... he can do it."

Charles was expected to attend a showing of the completed film, but he died before it opened in theaters.

As noted in the film's final credits, "Ray" is based on true events, but includes some characters, names, locations, events which have been changed and others which have been "fictionalized for dramatization purposes." One example of the film's use of dramatic license are the scenes which refer to Charles as being banned from Georgia.

Halls of Fame and other honors

Besides winning dozens of Grammy Awards in his career, Charles was also honored in many other ways. In 1979, he was one of the first honorees of the Georgia State Music Hall of Fame being recognized for being a musician born in the state. [cite news
title = List of Inductees

] Ray's version of "Georgia On My Mind" was made into the official state song for Georgia. [cite news
title = State Song
year = 1979
publisher = Georgia Secretary of State
url = http://www.sos.state.ga.us/state_capitol/education_corner/state_song.html
accessdate = 2006-11-25] In 1981, he was given a star on the and was one of the first inductees to the at its inaugural ceremony in 1986. [cite news
title = Inductees
publisher = Rock and Roll Hall of Fame & Museum
url = http://www.rockhall.com/hof/inductee.asp?id=76
accessdate = 2006-11-25] He received the Kennedy Center Honors in 1986. [cite news
title = List of Kennedy Center Honorees
year = 1986
publisher = Kennedy Center
url = http://www.kennedy-center.org/programs/specialevents/honors/history/home.html
accessdate = 2006-11-25] In 1987, he was awarded the . In 1991, he was inducted to the Rhythm & Blues Foundation. In 1998 he was awarded the together with in Stockholm, Sweden.In 2004 he was inducted to the , and inducted to the National Black Sports & Entertainment Hall of Fame. [cite news
title = Hall of Fame
year = 2004
publisher = National Black Sports & Entertainment
url = http://www.harlemdiscover.com/halloffame/
accessdate = 2006-11-25] Also in 2004, ranked him #10 on their list of the [http://www.rollingstone.com/news/story/5939214/the_immortals_the_first_fifty/ 100 Greatest Artists of All Time] .