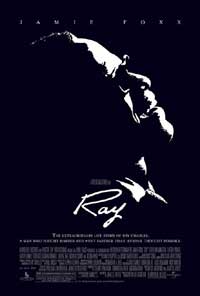 "Ray" is a 2004 focusing on thirty years [Director Hackford noted this focus on the years 1935-1965 in his DVD commentary for the film; the only exception to this focus is the film's final scene featuring and set in the in 1979, a scene Hackford included at Charles' specific request.] of the life of legendary rhythm and blues musician .

The independently-produced film was directed by and starred in the ; Foxx received an Academy Award for Best Actor for his performance.

Born in a small town in Georgia, Ray Charles went blind at the age of seven. Inspired by a fiercely independent mother who insisted he make his own way in the world, Charles found his calling and his gift behind a piano keyboard. Touring across the Southern musical circuit, the soulful singer gained a reputation and then exploded with worldwide fame when he pioneered incorporating , country, and influences into his inimitable style.

As he revolutionized the way people appreciated music, he simultaneously fought in the very clubs that launched him and championed artists’ rights within the corporate music business. The movie provides a portrait of Charles’ musical genius as he overcomes drug addiction while transforming into one of his country’s most beloved performers.

The film's production was entirely financed by , through his Bristol Bay Productions company. Taylor Hackford stated in a DVD bonus feature that it took 15 years to make the film. He later clarified in the liner notes of the soundtrack album that it took that time to secure financing.

Charles was given a copy of the film's original script; he objected only to a scene showing him taking up piano grudgingly, and a scene implying that Charles had shown mistress and lead "Raelette" Margie Hendricks how to shoot .

"Ray" was released in theatres on , on a budget of $40 million. The film went on to become a box-office hit, earning $75.3 million in the U.S. with an additional $50 million internationally, bringing its world wide gross to $125 million.

The film received mostly positive reviews. Most of the praise went to Jamie Foxx's "tour-de-force" performance which made him a favorite for the . The film however did receive some bad reviews, with critics complaining that the powerful performances were met with a mediocre screenplay. [ [http://www.rottentomatoes.com/m/ray/?page=2 Ray - Movie Reviews, Trailers, Pictures - Rotten Tomatoes ] ] Currently "Ray" has a certified fresh rating of 82% based on 191 reviews at rottentomatoes.com. [ [http://www.rottentomatoes.com/m/ray Ray - Movie Reviews, Trailers, Pictures - Rotten Tomatoes ] ]

Jamie Foxx was nominated for Best Actor for this film and Best Supporting Actor for "Collateral". He is the second actor to have been nominated in both categories in the same year, after . Like Pacino, he won the former, but not the latter.

Songs used in the film

* In the film, when Ray's younger brother George drowns in their mother's wash tub, he stands there and does nothing as George drowns. In his autobiography, Ray remembers trying to pull his brother out of the tub after realizing he was drowning but was unable to save him.
* In the film, Ray Charles is banned in the state of Georgia for not playing at Bell Auditorium in ; he refused to play in protest against segregated seating required by . In reality, Ray refused to play there after receiving a telegram from angry black college youth who begged him not to do so; Charles ended up having to pay compensation.Fact|date=February 2007 Notably, it is an angry black college youth, among protestors outside the Bell Auditorium, who convinces Ray in the film.
* In the last scene, which is at the Georgia State Capitol in 1979, a representative declares that "Georgia on My Mind" is Georgia's official and also makes a "public apology" for "banning" Charles. As already noted, no such ban occurred.
* In the studio scene where Ray is taught the "Mess Around," he is told it's in the "Key of G." The "Mess Around" is actually in the key of E flat.

* [http://www.raymovie.com/ Ray Official website]
*
* [http://www.washingtonpost.com/wp-dyn/articles/A7913-2004Oct28.html Taylor Hackford's Unchained Art] , an October 2004 article from the ""
* [http://www.craigarmstrongonline.com/film_score/ray.htm Craig Armstrong (Score Composer for "Ray")]
* [http://www.slate.com/Default.aspx?id=2108507 It's a shame about Ray] a review at that lists factual inaccuracies
* [http://www.rollingstone.com/news/story/6596222/hit_the_road_jack Background on the song Hit The Road Jack]