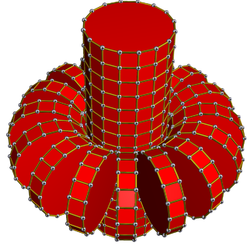 A net for 16-16 duoprism. The two sets of 16-gonal prisms are shown. The top and bottom faces of the vertical cylinder are connected when folded together in 4D.

The lowest dimensional duoprisms exist in 4-dimensional space as polychora (4-polytopes) being the Cartesian product of two polygons in 2-dimensional Euclidean space. More precisely, it is the set of points:

where P1 and P2 are the sets of the points contained in the respective polygons. Such a duoprism is convex if both bases are convex, and is bounded by prismatic cells.

Four-dimensional duoprisms are considered to be prismatic polychora. A duoprism constructed from two regular polygons of the same size is a uniform duoprism.

A duoprism made of n-polygons and m-polygons is named by prefixing 'duoprism' with the names of the base polygons, for example: a triangular-pentagonal duoprism is the Cartesian product of a triangle and a pentagon.

An alternative, more concise way of specifying a particular duoprism is by prefixing with numbers denoting the base polygons, for example: 3,5-duoprism for the triangular-pentagonal duoprism. 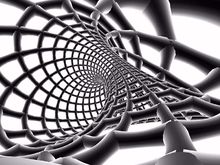 Like the antiprisms as alternated prisms, there is a set of 4-dimensional duoantiprisms polychorons that can be created by an alternation operation applied to a duoprism. However most are not uniform. The alternated vertices create nonregular tetrahedral cells, except for the special case, the 4-4 duoprism (tesseract) which creates the uniform (and regular) 16-cell. The 16-cell is the only convex uniform duoantiprism.

All of these images are Schlegel diagrams with one cell shown. The p-q duoprisms are identical to the q-p duoprisms, but look different because they are projected in the center of different cells.

A stereographic projection of a rotating duocylinder, divided into a checkerboard surface of squares from the {4,4|n} skew polyhedron

The regular skew polyhedron, {4,4|n}, exists in 4-space as the n2 square faces of a n-n duoprism, using all 2n2 edges and n2 vertices. The 2n n-gonal faces can be seen as removed. (skew polyhedra can be seen in the same way by a n-m duoprism, but these are not regular.)